Catching up with Bruno Gonzalez 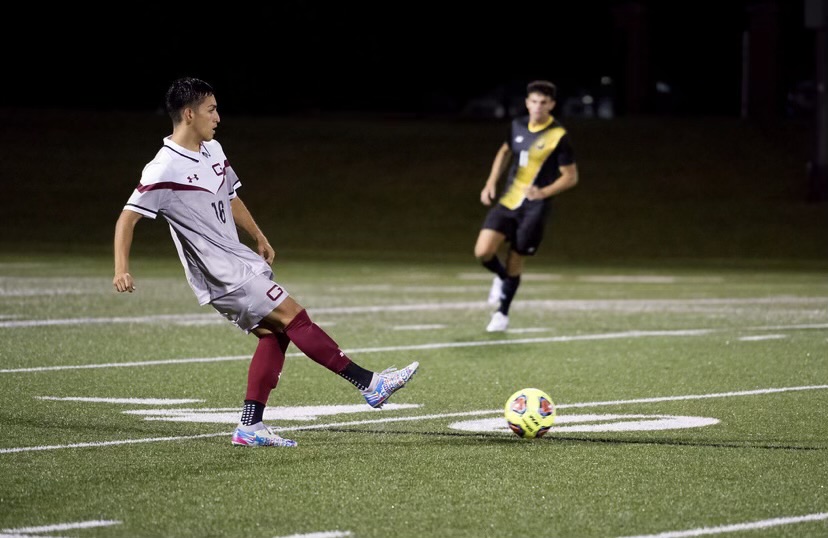 Bruno Gonzalez is a great example of how an immigrant can assimilate into the fabric of the United States.

Gonzalez played boys soccer and graduated from West Forsyth in 2019. Along with his father Rogelio, mother Ruth, and his older sister Barbara, the family moved to the United States from Mexico when Bruno was about 1 year old.
Still on the path for citizenship all these years later, Gonzalez is flourishing as both a student and soccer player at Guilford College, an NCAA Division III school. As he rapidly approaches the fall soccer season, he’s had a chance to reflect on not just his time at Guilford, but his time in the United States.

“It was a better living situation for my family, better job opportunities, better money. And they wanted to switch up the scenery and provide for my sister and me,” Gonzalez said. “So, they brought us over here.”

Nearly 20 years later, Gonzalez expressed his appreciation for what his parents did for him and his sister.

“I literally commend them,” he said. “They’re my heroes. I always look up to them in everything I do when it comes to school, athletics and just anything that goes with my future. I do it for them because they’ve missed a lot to start over in a brand-new country where they didn’t know anything.

“They’re learning about the system, learning like how to go about day-to-day stuff, and just slowly figuring it out. So, just watching them do that and growing up my entire life watching them do that has been just an inspiration for me to keep my head down and grind and make myself in a better position than they were so I can help them out.”

Despite doing everything they can to become citizens, the Gonzalez family are still going through the process. In addition, Gonzalez’s parents own a company called B&B Cleaning Services. And Barbara, who graduated from West Forsyth in 2017, graduated from Salem College in 2021, and is currently in graduate school at Wake Forest.

“The paperwork has been turned in,” Gonzalez said. “They’re just waiting like 17 years now. It takes a really long time for that paperwork to go through.”

The family came here because Bruno’s grandmother was already here and married an American citizen, he said.

“I want to travel. I want to go out there and visit them. I want to know where I’m from,” Gonzalez said. “Experience my culture, and also travel everywhere around the world because my parents, when they were in Mexico, they told me and they showed me pictures of them going here, going there, different places, exploring everywhere. And so, they want to share that experience with my sister and me eventually once we get our paperwork set up.”

Without the proper paperwork there is always the danger of not being able to get back to the United States should the family elect to visit Mexico.

“Leaving is not an issue at all,” Gonzalez said. “We could leave at any point if we want to, but it’s the getting back in that makes it way too difficult.”

As technically an international student, it limited what schools he could’ve gone to when he was in the recruiting process at West Forsyth. He’s considered a DACA (Deferred Action for Childhood Arrivals) student, so that limits the scholarship money he can receive.

“I signed up for a program called NCSA (Next College Student Athlete), which is kind of equivalent to my getting an agent,” Gonzalez said. “So, I explained to them my situation, and for them, their main advice was, it seems to be that private school seems to be your only way to, if you want to really play and make sure that you can afford the tuition that you’re going to pay, then you’ll really want to go to private school because they’re more willing to work with you financially when it comes to scholarships.”

It’s even more complicated than that. He can’t even get any federal or state aid. And in Division III, there are no athletic scholarships.

“It’s tough for him, and I know with college choices, it sort of limited him where he could go,” Coach Jeffrey Williams of West Forsyth said. “He’s persevered and and figured out ways and definitely made the best of his situation.”

At 5-foot-11, 160-pound defensive back for the Quakers, Gonzalez has more than acquitted himself in the classroom. He has been named to the honor roll, dean’s list, and also was named to the ODAC All-Academic Team.

“My sister’s in grad school,” Gonzalez said. “She’s always been an achiever, like a really high achiever. And she’s always pushed me to be like her in the classroom. And so, I’ve always just taken a bunch of classes, a bunch of AP – a lot of the high-level classes, making sure that I was staying as top of my class as I could be, while also playing soccer.

He has received the Nathan Hunt Scholarship, which is named after the founder of New Garden Boarding School. According to the Guilford College website, the scholarship is for “those who demonstrate the highest level of academic achievement while embodying the qualities that made Nathan one of the pillars of the community: creativity, integrity, perseverance and fortitude!”

“I have other scholarships, through the Winston-Salem Foundation, the Crosby Scholars, and also the school gives out a lot of financial aid,” Gonzalez said. “So, I just reach out to them a lot and see what they can do to help me. Because they want their students to succeed. Whatever way they try to keep them there they try to do the best they can.”

Gonzalez has also shown he is more than capable of playing college soccer. Last season, he logged 906 minutes for a team that struggled to a 5-10 overall record.

“He’s super-confident,” Williams said. “He played center-back the game I saw him with a three-back system. And that would’ve been an area where I wouldn’t have seen him play in high school. But I think him being vocal and giving everyone else instructions at that position really helped him out to play that position.”

As slight as Gonzalez is, he uses his intelligence on the field.

“To a certain degree, I was smaller, maybe not as fast in some sports,” Williams said. “I had to work hard and figure out ways to get past that, or to have an edge. And I feel like Bruno, to some degree, it’s not perfect, but to some degree, is like that.”

Gonzalez isn’t the only former West Forsyth player at Guilford. Jesse Guzman will be a sophomore there this fall.

“Bruno sends me highlights,” Williams said. “He got to play at center-mid, I think it was last year. And he showed me where he scored a goal and sent me the highlights of that. So, that’s fun.”

This season will be Gonzalez’s last at Guilford. But before that Gonzalez is working as intern with NC Fusion’s U23 team, the club soccer team based in Bermuda Run.

“Being around that type of environment all summer long with D-I players, all these players – high quality,” Gonzalez said. “I learned so much from them when it comes to their dieting, what they do, what their training sessions are. Even the coaches themselves, they help me out a lot. I get to hop on the training sessions with them.”

As for his upcoming senior season at Guilford, Gonzalez dreads that last game this fall, whenever that might be.

“I’m an ugly crier, so I will be crying,” he said. “But it’s more so that I’ll be sad that that chapter of my life is over, that I won’t step on Guilford’s soccer fields to play competitively in college here anymore.

“But it will be more crying, as a testament to myself that I’ve come this far from where I’ve started. And this is how far I’ve gotten. I think I’m thankful and blessed that I’ve gotten an opportunity to play the sport that I love.”

Even though this is Gonzalez’s senior season at Guilford, he hopes to be able to go to grad school and play soccer at another college next fall.

“Whether I’m stressed, whether I’m going through something, like just a hard decision in my life, a hard choice, I have to be at the fields,” Gonzalez said. “I have to go play with the ball. I just go clear my mind, train, get my touches in.

“It helps me just to escape a lot.”