The Edwards – I envision a portrait of humanitarianism when thinking of Beth and Joel. Two people concerned with and seeking to promote human welfare through healing and teaching arts. Their lives paint a picture of sensitivity and sensibility, having an awareness of and responding to the complex physical and emotional situations of others.

Recently, the couple retired and were celebrated at the clubhouse at Colin Creek Golf Club with an old-fashioned cookout — a grilled beefy burgers and dogs kind of event with all the fixin’s and savory sides that accompanied. Going well with beef, the crispy tater-tots and fries begged inclusion. A favorite meal for many, including myself. A variety of cookies were offered on trays, which were small bites of sugary sweetness following the hearty meal. There was much to be relished as well as celebrated.

Dr. Joel Edwards is a household name in Davie County, having served the folks there for 43 years as a family physician. For the last 28 years, Joel has been with Davie Medical Associates.

Beth has much of which to be proud, with a history of 30 years working with at-risk kids. She worked in Iredell County prior but served the last 16 years at Central Davie Academy.

Both are considered artists in their own right, deeply involved in the healing and teaching arts.

On being a teacher, Joel agreed and added, “Being a physician, not only am I a provider of direct medical care, but a doctor is always a teacher, too.”

The education of patients and communities about optimal personal health and healthy lifestyle was Joel’s focus. In addition, as a teacher, he has worked with medical students, residency physicians and physician assistants — all kinds of students in medical training programs. Joel’s been a big part of their learning process. Since 2001, one of the places he focused on was medical missions. Joel’s goal was to teach people about medical missions while teaching people in other countries about optimal care for their bodies.

“The kids I’ve focused on in my 30 years are the ones who have the most significant risks in their life such as significant traumas, multiple things that have negatively affected their emotional state.”

Beth’s mission focused on meeting students at the point where they were and then providing the support they needed to learn.

“Students aren’t equipped to learn core courses when they’re not in a good place. They need love, support, and encouragement.”

The process was one of discovery. Why are students where they are? Beth saw her role as developing relationships so she could figure out the answer to that question. Her job was to get them back on track and change their academic experience.

The Edwards have retired but not in the true sense of the word. They’ve left their jobs, but they won’t cease to work. That’s what they know and what they do.

An artist of any kind is both, a creative and visionary. Beth and Joel are moving forward with a park they envisioned years ago. A creative seed was the origin of their vision.

When Beth and Joel met 12 years ago, after his wife, Linda, passed away, they talked about doing something in his wife’s honor. They wanted to give back to the community and had talked about it for years. At that time, the couple had no foresight of buying a portion of a golf club.

The couple’s original thought had been to create and develop a safe outdoor place where individuals and families could participate in physical activities while staying in touch with nature. When they bought the property, they knew they’d enjoy having some walking and biking trails and a playground.

As a child, Beth had grown up with a community park right near her home. Going to the park was inexpensive and fun, and they’d pick up pizza and play for hours. When Beth raised her kids, their favorite thing to do was go picnic at a playground. There’s no question that picnics and playgrounds go together, a favorite pastime for children.

About 25-30 acres of land will be part of the Park at Lake Louise when it all gets rolled out, and the golf course will use about 54 acres. The park’s new picnic shelter and bathroom are currently being built. Hopefully, by the time September arrives, everything will be ready for picnicking. Colorful picnic tables have been purchased that match the playground equipment. Lots of new landscaping will be planted over the next year or two. Another part of the vision is to develop a place for people to go fishing. In the future, maybe a boardwalk that runs along the water’s edge and is part of a nature trail. Also in the master plan is the possibility of a small pavilion that would allow for live performances.

The couple has enjoyed each step along the way. However, the process hasn’t always been a bed of roses. But they’ve patiently stayed on course and jumped each hurdle along the way. There were a few issues to be worked out before seeing their vision come to fruition. For one, everything costs twice as much as before. In addition, there have been significant supply chain issues. Finding workers has been another as folks have been extraordinarily busy the last 18 months. It’s been difficult getting projects completed. Moving forward, the couple aspires for the park to be better known and well utilized and they’d like to see more people get involved.

Joel and Beth have shared with the community more than contributions from their professional careers.

Joel recognizes the importance of people in his life, saying, “My greatest contribution has been a lifetime of providing healthcare to our community and involvement in multiple things like church and civic organizations, and developing positive personal relationships in the community over the years.”

On the importance of having good role models, Beth added, “I feel we model for the community compassion and care for others — whether Joel’s focused on healthy living styles or I’m focused on mental health — or a family’s basic good health needs, mentally, physically and spiritually.”

Their love story is a unique one but neither claims the vision of what would be their future together. Their relationship blossomed similar to the way it did for the park — from a tiny seed.

Joel’s wife, Linda, was a retired school principal when Beth met her. Before the doors opened, she was the first volunteer on the doorstep of Central Davie Academy. Linda wanted to volunteer because she’s always been passionate about at-risk kids. Feeling the need for a program like Beth was developing, Linda became Beth’s professional mentor, volunteer and good friend.

Of their meeting, Joel added, “Over the years, I met Beth a few times, but I didn’t know her well. I had no vision that any relationship would develop.”

Beth spoke at Linda’s funeral, and afterward, she extended an invitation to Joel for dinner. She offered to help with anything he might need following his loss. Later, Joel called her up and invited himself for dinner and then Beth had to figure out what to do. She was no cook.

Beth admits, “It was terrible. But my kids were there and they entertained us at the dinner table. So there wasn’t much attention to the food.”

As far as Joel was concerned, he agreed it was bad but not bad enough that he didn’t go back! The couple began spending a little time together, and Joel asked Beth to take dance classes with him.

“We took ballroom dancing together and fell in love,” Beth confided.

Joel and Linda had taken classes. As part of a healing process, he had started back to dancing but had no partner.

On Beth’s skills on the dance floor, Joel noted, “She’s a much better dancer than I am.”

So, how, when, and where did the couple know a marital union was ahead? The couple climbed Mt. Kilimanjaro back in 2014. While Beth claimed to have no hiking skills, she agreed to attempt it with a stipulation: she made Joel promise that if she couldn’t make it he’d go on without her. He agreed. But she did make it — all six days it took to get to the top. Now that’s true love and dedication.

While it took two days to descend the mountain, I believe these two lovebirds have yet to come down off a high. Beth and Joel married in 2015 and, in retirement, spend quality time together, both in sickness and in health.

The couple agrees there was no marriage revelation early on, but Joel added, “Over time, it became clear that we were good for each other.”

Regarding insight from the Holy Spirit, the Bible tells us in John 16:13, “But when he, the Spirit of truth, comes, he will guide you into all truth. He will not speak on his own; he will speak only what he hears, and he will tell you what is yet to come.”

May we all rest in the Spirit of God’s truth to better understand the wisdom He provides.

In a mixer bowl, combine ground beef, onion, mustard, Italian seasoning, cumin, pepper and salt. Divide beef mixture into 4 portions. Form burger patties that are 4-inches in diameter and uniform. You can cook in a skillet or under a broiler. When broiling, place meat on a broiler pan rack 3-4-inches from heat source. Broil 8-10 minutes, turning one time.

• Fresh corn on the cob

In a preheated 400-degree oven, cook corn in shucks for 45 minutes. Brush melted butter on corn.

Drain all beans well. In a bowl, toss beans with onion, green pepper and pepper. Set aside. In a saucepan, combine sugar, cider vinegar and salt. Heat until all sugar is dissolved. Add vinegar mixture to the bean mixture. Mix well. Pour vegetable oil over all and toss to coat evenly. Refrigerate in a large covered container for 8 hours or overnight. When ready to serve, fry bacon until crispy. Drain well on paper towels. Cut or crumble bacon and toss with beans.

In a skillet, melt butter. Add peanuts and brown them in the butter while frequently stirring to prevent burning. Remove from heat and stir in Parmesan cheese. Set aside to cool. Chop all vegetables, toss well and chill. For the dressing, in a mixer bowl, combine mayonnaise, sour cream, sugar and vinegar. Mix well and chill. When ready to put slaw together, mix vegetables with dressing. Place a layer of the vegetables on bottom of bowl. Sprinkle with a layer of nuts mixture. Repeat until you have filled the entire container. Reserve some nuts to put on top.

In a mixer bowl, cream butter and honey until fluffy. Beat in eggs, one at a time, mixing thoroughly between each addition. Add flour, baking powder, cinnamon, ginger and cloves. Mix well. Fold in raisins and grated carrots. Mix well. If mixture is too dry, add a little milk. Drop by tablespoon on a greased cookie sheet. Bake in a 350-degree oven for 10 minutes.

Two days before serving, peel and quarter oranges and lemons. Place in a bowl and pour sugar over them. Add just enough Sprite to cover. Keep well covered in refrigerator. When ready to serve, add Kool-aid to hot water and stir to dissolve. Pour over the refrigerated fruit. Then add enough cold water to make one gallon. Yield: 1 gallon. 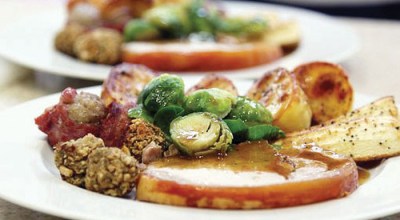 Bless Your Spoon: Hotel to the stars and 5-star dining 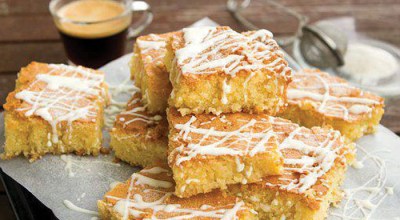 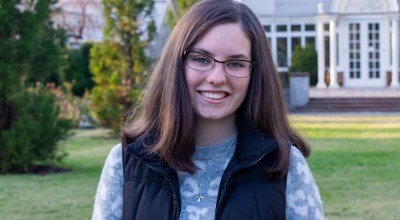