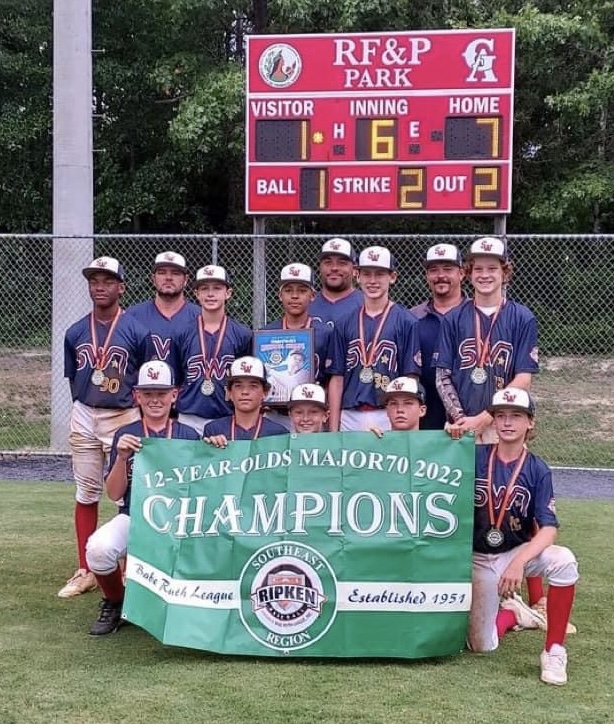 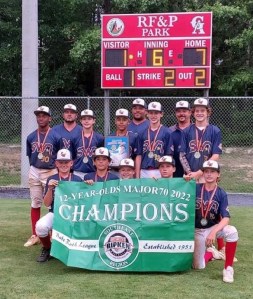 Getting to witness a dogpile celebration after the thrill of victory is something that Andy Sullivan will never tire of seeing.
Especially the dogpile after the Southwest Athletics All-Stars 12U team captured the Southeast Regional Championship last Saturday in Glen Allen, Virginia, to advance to the Cal Ripken Major-70 World Series in Branson, Missouri, Aug. 3-13.
This is the first team from Southwest Athletics to advance to a World Series since 2002, when the organization was affiliated with Little League and sent a team to Williamsport, Pennsylvania.
“That was a special moment that I don’t think any of them will forget, either” Sullivan said. “It’s always such a joy to see something like that happen, especially after all of the work they have put into our season so far. This is only the third team from Southwest to get to a World Series, so they are in some special company and that is exciting.”
Sullivan, who was 16 at the time, said that he went to Williamsport to watch that team play in 2002 and remembered what a great experience he had.
“It was just a lot of fun to be there as a fan and support what they were doing,” Sullivan said. “And I think the atmosphere in Branson will be every bit as fun for these guys.”
Southwest has won all 14 games it has played in, including the Western North Carolina State Championship.
They wrapped up a perfect 5-0 record at the Regional with a 7-1 win against Fipps, Florida — the Southern Florida state champions — in the championship game, their second win against the team during the regional.
Getting to the championship game was challenging. Playing against the Arlington Storm, the Virginia state champions, in the semifinals, Sullivan said his team struggled to figure out Arlington’s pitcher.
“We got off to a pretty good start after hitting three solo home runs to take an early lead, but they came back and tied the game at 3 after three innings,” Sullivan said. “And then we just hit a rough spot and weren’t playing our best while their pitcher was really keeping us off balance. We just couldn’t figure him out.”
Arlington took a 6-3 lead in the fifth inning, and that’s when Sullivan said things started going their way again.
“We just got a charge all of a sudden,” Sullivan said. “We ended up hitting a couple of two-run homers to take a 7-6 lead, then tacked on another run to win the game 8-6. That was a hard-fought game and a great example of a good team finding a way to win.”
Southwest opened the tournament with convincing wins against Rockville, the Western Tennessee state champions, 17-2, and then Bellevue, the runners-up from Virginia, 17-3, before beating Fipps to close out pool play 11-1.
Now, the team will turn its attention to Branson, Missouri, and has already begun fundraising efforts.
“It’s a real quick turnaround and we’ve already got a GoFundMe up and active,” Sullivan said. “They are expecting about 20 teams or so in Branson. There are eight regions in the U.S. and there will be seven international teams, with one from the Caribbean already qualified.”
Sullivan said the team will likely have this week off and resume on-field preparations next week.
“They might not realize it yet how special this is and may not really understand the significance of it until they get older, but I know that when we get there, they will be super excited and anxious to play,” Sullivan said. “And they have earned this. And that is what really makes it special.”

Want to help?
The team has set a goal of raising $15,000 to help with travel expenses.
Search GoFundMe for SWA 12U All-Stars World Series Fundraiser to donate if you are able.