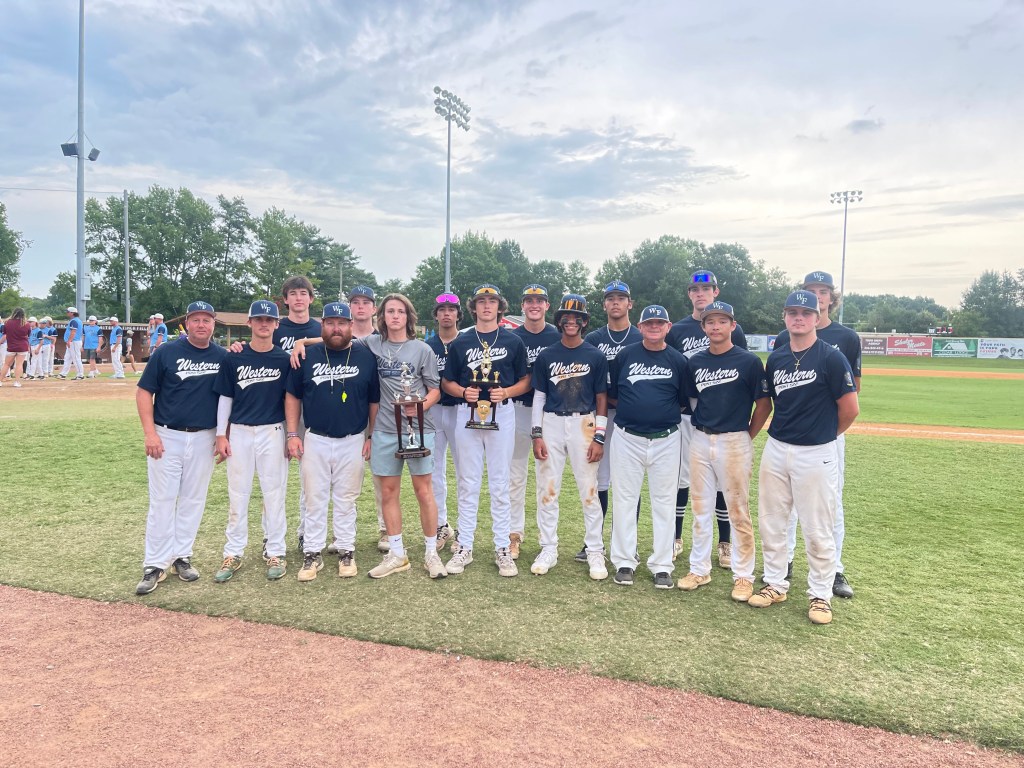 Western Forsyth Post 522 Blue came up just short in the championship game of the American Legion state baseball tournament on Monday at Finch Field in Thomasville, falling 2-0 to Burns Post 100 and ending the season with a 21-5 overall record.

The accolades for the team were numerous, as were the first-time accomplishments for the program.

“So many positives we can take away from this,” Coach Jon McIntosh said. “We came up just short (Monday), but we had our chances. But these guys were fighters.”

Post 522 Blue could muster just three hits in the championship loss to Burns.
“We had the bases loaded with no outs in the fifth and couldn’t scratch,” McIntosh said. “And we almost tied the game in the bottom of the seventh on a ball that would have been a home run, but it was about five feet foul in left field. Our guys just kept battling.”

Post 522 Blue advanced to the tournament round out of pool play with a 2-1 record, losing its opening game 16-9 to Caldwell Post 21 last Thursday, but came back and won the next two games in pool play 8-1 against Kinston Post 43 and 8-4 against Pembroke Post 50.
It then nipped Post 87 HiToms 7-6 in the semifinal on Sunday to advance to the championship game.

“We’ve had great pitching all year and we’ve played great defense,” McIntosh said. “I can’t remember any game where our guys just kicked it around. And our pitching was always on point, even though a lot of times we did pitching by committee and got great results.”
Post 522 Blue started the season strong with an 8-1 record, then dropped three straight games in three days before steadying themselves by reeling off 10 straight wins, including a 7-6 win against Stokes Legion to secure the No. 1 seed from Area 3 for the state tournament.

“We lost those three games in a row playing with the same nine players for three straight days,” McIntosh said. “We had a few out on vacation during those games but once we had everyone back, we were rolling again.”

McIntosh praised the play and leadership of Parker Lowe, a rising senior at West Forsyth, for his efforts both on and off the field.
“We went as Parker went,” McIntosh said. “He was also like another assistant coach for us out on the field.”
Lowe led the team with a .404 batting average, hits (36), singles (28) doubles (tied with 7) and runs scored (28).
“Parker and Will Siceloff and Chris Cornett were the oldest players on the team, and they were our leaders,” McIntosh said. “Ethan Chandler and Jordan Richardson were solid all season on the mound for us and did everything we asked them to do. Jordan threw a complete game in the second game of the state tournament, a game that if we lose, we are probably done. And Ethan pitched a complete game in the championship game and only gave up two runs.

“We had a knack for coming back and that’s what I’ll remember about this group,” McIntosh said. “We used to joke around with them about it. I think we trailed in just about every game we played this year. One game, we were down 11-0 and came back and won. We were down 15-0 in the first game of the state tournament and came back and made it 15-9. So, they were always fighting. They had that ‘never quit’ attitude and that’s all you can ask for.”