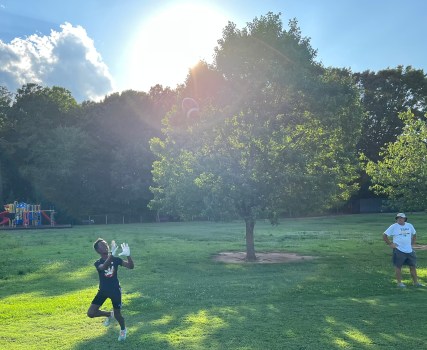 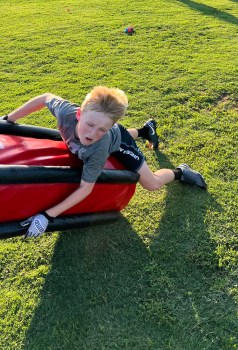 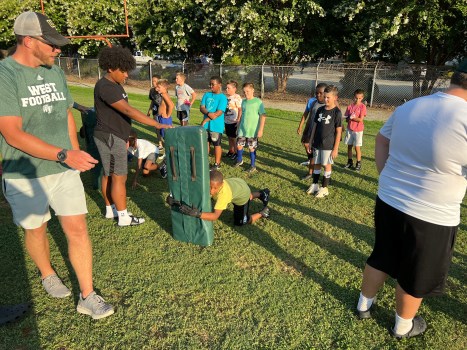 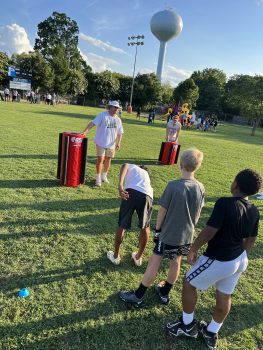 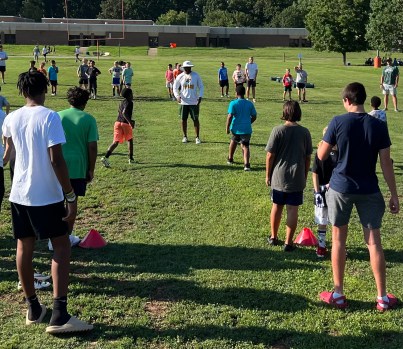 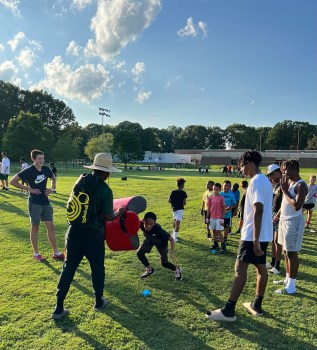 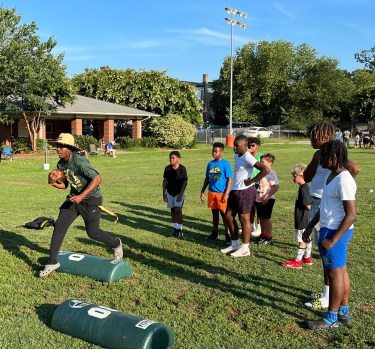 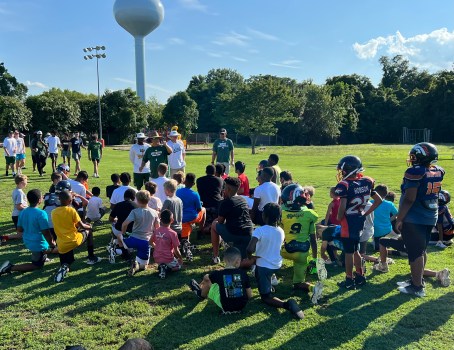 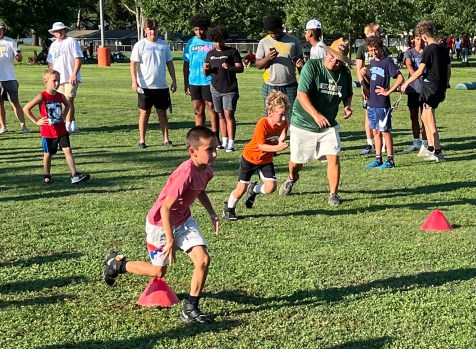 In between all the whistles, water breaks and instruction, there was still a lot of fun to be had last Thursday at Clemmons Elementary School.
About 50 players from the Forsyth County Broncos, who call the field behind the school home during their season, were learning about football from a different set of coaches and players.
Several coaches and players from West Forsyth were on hand conducting a skills clinic for the younger players, teaching them drills and fundamentals that many of the Titan players have learned over the years.
And for Coach Adrian Snow, the experience meant a lot more than teaching other players from the community about the game he loves.
“We talk to our guys about giving back and being servant leaders, trying to help people other than yourself,” Snow said. “I just feel like we have opportunities like this that can keep that going, that’s a pretty big deal. We all need something bigger than ourselves. Football is just part of the equation.”
It was the second clinic Snow and his staff conducted last week. They also did a similar event for the Tiny Indians football program last Tuesday.
It has been a busy summer of workouts for the Titans, who held the last of their 7-on-7 scrimmages last Wednesday.
“We did one of our last workouts earlier this morning and we’ll have mini-camp next week on Monday through Thursday,” Snow said. “Then we are officially back at it on Aug. 1 once practice gets going.”
It was the second year the Titans have done an event last this. Last summer, it was scheduled during a “dead period,” meaning coaches were not able to participate.
“Last year, our players ran it, and they had a great time,” Snow said. “We knew this year we wanted to make sure we could be here, too. This is a great way for our kids to teach and coach. It’s just a positive situation for everybody.”
Participants were divided by age and position and took part in drills at several different stations.
With the sweltering heat, the water breaks were abundant.
One of the biggest highlights came when Snow tasked the Titans’ kicker, senior Alejandro Morillon, with making a 40-yard field goal.
As the campers gathered around Morillon, they began chanting, “Alex, Alex,” and clapping as they did it.
Snow informed Morillon and the campers that they would all get some extra time during the next water break to refresh themselves if he made the field goal.
If he missed — extended time for that session of drills.
Morillon said his foot was hurting and tried to play that up to the participants, but their chanting persisted. As Morillon measured the distance and looked one final time at the uprights, he went into his routine and launched the ball towards the right side of the goal posts. It easily had the distance. And the ball was comfortably inside the right upright.
The participants started cheering. Morillon had a wry smile on his face.
And the unmistakable voice of Snow bellowed, ‘Gooooo geeeeeetttttt waaaaaaaaater….”
“This was just the perfect time for us to get out here and do some fun things with this group,” Snow said. “I hope they are having as much fun as we are.” 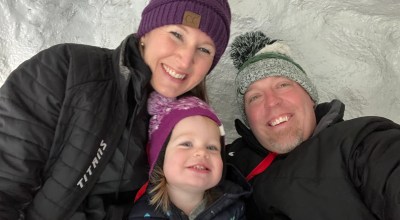 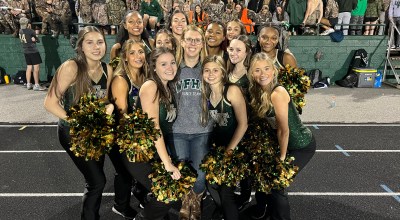