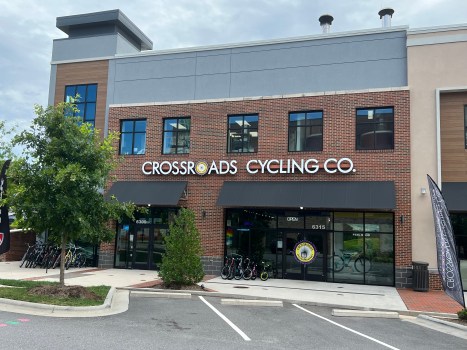 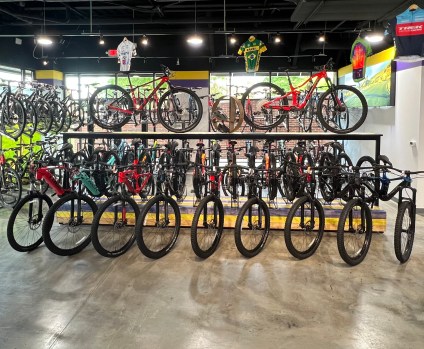 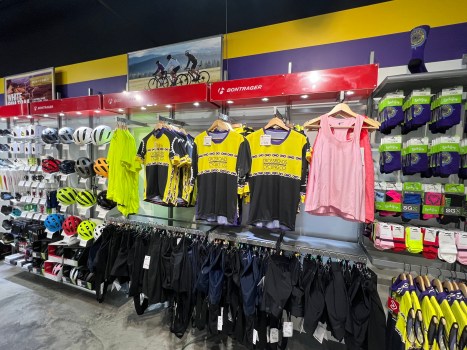 Crossroads Cycling Company has been open since June

David Carleton likes to end his long bike rides somewhere where he can get an ice cold beverage. This is something he kept in mind when opening Crossroads Cycling Company, the newest bike shop in Clemmons.

“We consider it a destination bike shop. You can ride your bicycle with your friends and when you get off of them, you have so many choices of activities to do after your bike ride: the playground, Cugino Forno, Abbott’s Frozen Custard, Mossy’s, Dairio, East Coast Wings… all those places where you can get off of your bike and still spend time with friends,” Carleton said.

The location is also nearby several common biking areas with plenty of options to take your route, including Harper Road, Tanglewood Park and the bike lanes near Novant Health.

Carleton’s interest in biking began when he was running at the Jerry Long YMCA and saw a poster for a duathlon, which is an athletic event that consists of a running leg followed by a cycling leg and then another running leg.

“I went home and told my wife I was going to do the race, and she reminded me that I didn’t own a bicycle. I borrowed a bicycle from a friend and I’ve been in love with them ever since,” Carleton said.

Carleton also managed to get his wife/co-owner, Angela Carleton, involved in cycling.

“He got me a bike and got me out on the road and shortly thereafter I was hooked,” Angela Carleton said.

Together, they opened their first store in Statesville in 2017.

“When I opened my first store, my cycling went from 400 miles a week to 0 miles a week. It was far different from what I imagined being a bike shop owner — that we were going to be able to ride bikes all the time,” David Carleton said.

In 2020, they opened a second store in Kannapolis, which was full of ups and downs. Many people invested in bikes as gyms were shut down due to the pandemic. Though, high demand in what was known as “the bike boom of 2020” led to global shortages. Once again, Carleton’s time was spent looking for bicycles to keep his business alive.

“The world shortage of bicycles has been time consuming and very tough as a business owner,” David Carleton said.

Nevertheless, Carleton and his wife finally opened a store close to home.

“We’ve been a part of the cycling community (in Clemmons) for a very long time and we felt that there was a need for a new bike shop. The population and the enthusiasm in cycling has grown since the pandemic,” David Carleton said.

All the employees at this store are cyclists and couldn’t wait to help out their friends as soon as they heard that the new store was opening.

“People were knocking down the door to come work for us,” David Carleton said.

In fact, many of the employees at the Clemmons location are women in order to cater to female cyclists in the community, since biking is a male-dominated sport.

“Women can be apprehensive to go into a bike shop with a bunch of men… it’s much easier for women to come into the store and talk to another woman about cycling,” David Carleton said.

Crossroads Cycling Company also hosts a monthly “Ladies Ride” the first Monday of each month which is followed by maintenance tips and guidance for working on your bike. Angela Carleton enjoys helping out with the Ladies Ride, too.

“It’s an excellent way — especially for women that are just getting into cycling — to come out and we offer the very basics of getting used to riding on the roads,” she said.

When they’re not in the shop or hosting biking events, the Carletons cycle together and enjoy biking locally, finding places to ride while camping, or traveling in search of new trails. This past weekend they attended a charity event in Wisconsin to support childhood cancer research.

“We just like adventure. That’s what we’re looking for. We’re in Wisconsin for the weekend. We’re doing a 100-mile bike ride tomorrow from the Trek headquarters out into places that we’ve never been before,” David Carleton said.

However, you don’t have to be an experienced biker to come into the store. In fact, helping new bikers is one of Carleton’s favorite parts of his job.

“I truly enjoy it. My eyes light up when a family of four or five come in looking for bicycles. I tell people, ‘You have a lot of milestones in life and the first milestone that I remember was my first bicycle,’’’ David Carleton said.

The Carletons are happy to be in Clemmons fulfilling the project that has taken them two years to complete.

“It took a little bit for us to get where we’re at, but we’re happy. We love it.”