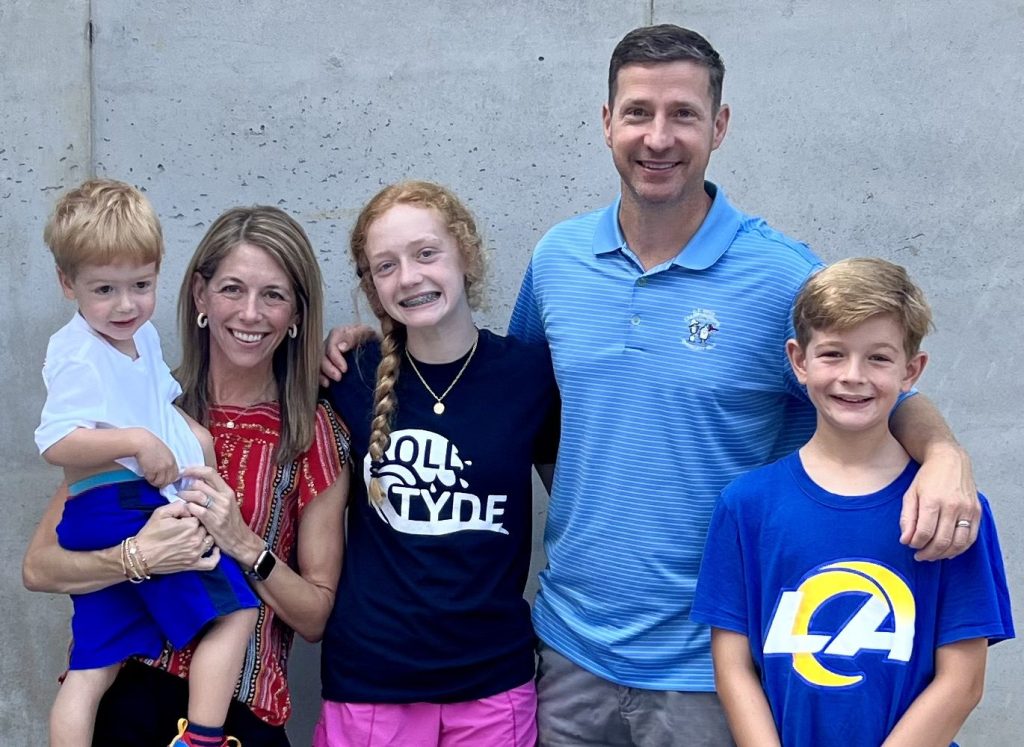 Kevin Hinshaw grew up in a close-knit family in Mocksville.
The youngest of two kids, Hinshaw’s parents encouraged him to play outside or in something active.
“I don’t even think we had cable until I was at least 12 years old, so whatever we did it didn’t involve technology,” says Hinshaw of his childhood. Hinshaw played sports ranging from soccer, baseball, football, basketball and tennis. His parents helped support his enjoyment of sports, and even coached when needed. “As you get older and it gets a little more competitive you narrow your focus where you get more success,” Hinshaw said. “I stayed with tennis and basketball while I attended Davie High School.”

During high school, Hinshaw spent a lot of his time working in the tennis pro shop at Bermuda Run Country Club with Bill Appelt. Hinshaw started helping out there at such a young age he had to attain a workers permit to officially work there. “I spent a good bit of time stringing tennis rackets, teaching lessons, clinics, and I learned so much from Bill. Not just about tennis, but also just about life too. Bill made such an impression on me about being respectful and how to treat others,” Hinshaw said.

Hinshaw’s love for tennis showed on the court too. He excelled in high school for the War Eagles and earned all-conference honors. Though he could have chosen a smaller college to continue playing tennis, he followed in the family tradition of going to the University of North Carolina at Chapel Hill.
“Both my parents went there, and so did my older sister. I knew that I wanted to go somewhere big, and I thought it was the right fit,” Hinshaw said.
Although UNC was big, it didn’t take Hinshaw long before he found a good group of friends. “It’s funny because I ended up becoming good friends with a group of about 15 guys and a good handful of them were from Clemmons and went to West Forsyth. One of them we used to compete against each other in tennis in high school and had a bit of a rivalry. To this day, we have maintained our friendships,” Hinshaw said.
Hinshaw was also steadfast in his degree focus in business. “My sister had chosen the medical route, and I always knew that I wanted to do something in business. I knew that I enjoyed meeting people and talking with them,” he said.

Hinshaw knew after graduating in 1999 from UNC that he wanted to spread his wings in a bigger city. “Right after I graduated, I headed to Atlanta, Georgia and began working for Black and Decker in a marketing sales job. I lived at the time with one of my college friends too, which helped make the transition easier. At that time the economy was pretty strong so Black and Decker was hiring a lot of college graduates (around 300),” Hinshaw said.
The job was beneficial in another aspect. Hinshaw met his future wife, Lindsay, at a training session. “Lindsay was from Ohio but had moved to Phoenix, Arizona to work for the company. We spent about two weeks together at the training session for our company in Towson, Maryland and we hit it off,” Hinshaw said.

After a year and a half in Atlanta, Hinshaw took a new job at Century Furniture and ended up working out of Ohio. “My dad, Mike Hinshaw, had spent his career in the furniture business working at Baker Furniture. I had learned a lot from him and was interested in a career that was similar to his. After a few years working at Century, my dad and I decided in 2003 that we wanted to open up our own business. We both left our steady jobs to open Woodbridge Furniture. At that time, I was too naïve and young to understand the risk of it all. I didn’t have any family responsibilities to worry about. My dad was in a different stage of his life, and I really admire the leap of faith and courage he took to start it. I moved to Charlotte to be closer to home and get everything started with him,” Hinshaw said.
As Kevin and Mike started their dream company, Kevin also married Lindsay in 2005. “Lindsay was very supportive of our business venture too. We started off with three employees and now have steadily grown to 26. One of the things that we value is ensuring people get a lot of our personal attention. A lot of time our competition is larger companies. They care but they don’t know you as well on a personal level as we do. One of the first places we began showing our furniture was Meg Brown Home Furnishings. One of the owners, Davin Brown’s mother, was friends with my mother, and they were very good to us. Those types of relationships matter,” Hinshaw said. Locally, Woodbridge Furniture is also found at Today and Tomorrow in West End.

While growing a family furniture business, Kevin and Lindsay welcomed their oldest, Taylor (13) in 2008 and then their son, Max (11) in 2011. “One of the benefits of owning your own business is having flexibility with your schedule. Lindsay and I adjust our days around the kids’ schedules. You don’t realize what being a parent is like until you’re in that moment. It made me realize how much your parents sacrifice for you once you’re in their shoes,” Hinshaw said.
A few years after Max was born, the Hinshaws moved back to Clemmons to be closer to their family. “We thought we were done having children,” Hinshaw said with a laugh.
However, Kevin and Lindsay welcomed their youngest son in 2018, William.
“We weren’t planning to have a third, but he has been such a blessing and a joy,” Hinshaw said. “He is almost like the family mascot because he comes to all of Taylor and Max’s sporting events and activities. “We always say that the whole village is helping raise him.”
Much like Hinshaw experienced as a child, he attends all of his children’s activities. He has also coached basketball for his children. “They’ve taken interest in sports that both my wife and I didn’t play with the exception of basketball so that’s been the only opportunity to really help out. We’ve enjoyed watching them do what interests them most and thrive,” Hinshaw said.

If not going to one of the kids’ activities Hinshaw likes to spend his time trying to get to the gym at the Jerry Long YMCA or watching anything involving Tar Heel sports. “I’ve always been an avid fan and it’s fun to share in it with the kids,” Hinshaw said.
“My family has also appreciated being so welcomed at Hillsdale Methodist in Advance. Tiffany Gulledge, the director of children’s ministry, was a friend of mine growing up. I knew she was involved in the program there, and she said such great things about it, and Lindsay and I wanted our children to have that in their lives. We really believe in giving back to our community, and there are a lot of opportunities within our church to do so. Our community has been very good to us, and I want to reflect that gratitude back, too.”