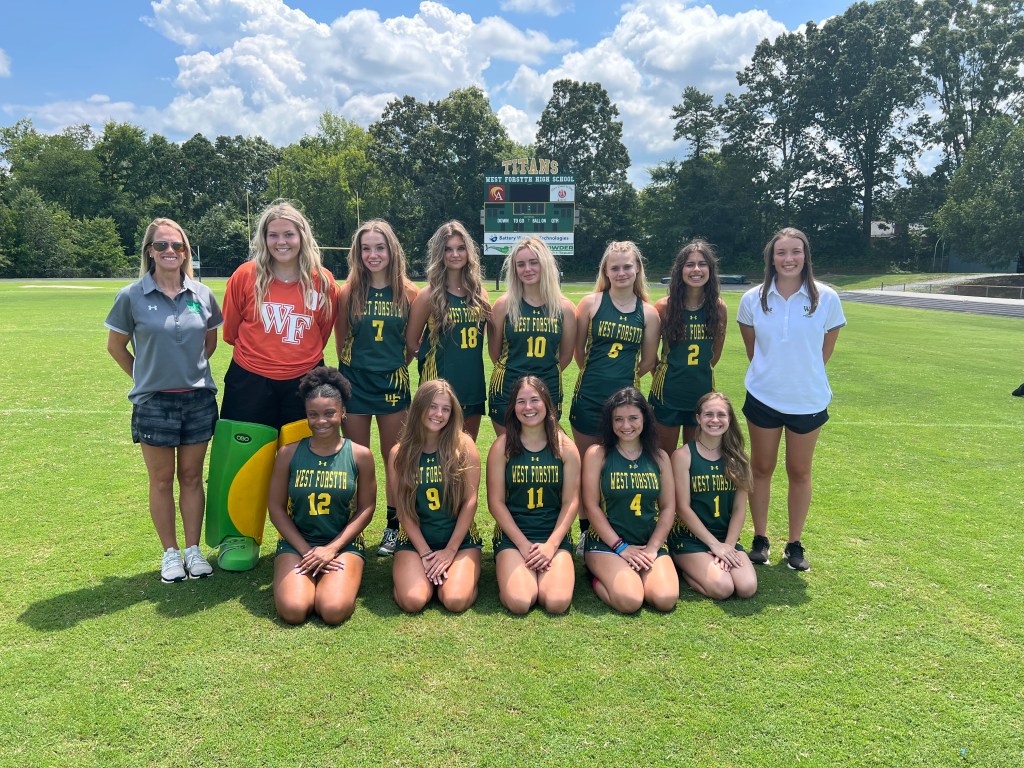 Field hockey is a relatively new sport to North Carolina.

However, it’s not new to Ann Marie Westmoreland, who is the new field hockey coach at West Forsyth, replacing Mike Bryant. Westmoreland, 32, is a native of Delaware and played collegiately two years at Appalachian State.

Westmoreland was Bryant’s assistant last year, but she said he became sick during the preseason, and assumed the reins as head coach last year until Bryant returned towards the end of the season.

“At first I was a little nervous,” Westmoreland said of coaching last year. “But after I got into the groove of things it was actually really nice because I could do whatever I thought was right.”

“It went from scheduling practices to making sure I had a bus driver for away games to ordering the gear for the girls, making sure the girls were able to get out of school,” she said. “So, I had no idea any of that had to happen. Every day I was learning something new as to what a head coach would do.”

One way she did improve was setting up reminders to the West Forsyth players and parents through the Remind app of anything that either they or she needed to know. She said that when Bryant returned toward the end of last season, it was nice to have him back.

“It was good to work with somebody because we say, ‘Hey, what do you think about this?,’” Westmoreland said. “Because I played field hockey at Appalachian State. So, he asked, “What drills did you guys do? And maybe we can bring it down to a high school level.’”

Once Westmoreland was named the head coach for this season, she said one of the first things she wanted to do was hire an assistant coach. Enter Abby McAninch, the daughter of former West Forsyth principal Charles McAninch, who is now the principal at Lewisville Middle School. Abby McAninch never played field hockey, but she did play lacrosse, soccer and swam.

“I think having an assistant is a huge help just because of that (drawing plays),” Westmoreland said. “I also have a family. So, I’m married and have three kids. So, that’s helpful if my husband isn’t able to be home right at 5:30 (p.m.), I can say, ‘Abby, start the girls on warm-up. I’ll be right there.’”

As far as this season, West Forsyth has plenty to build off from last season. It was 9-6 overall and 6-2 in the conference.

Field hockey is still an unsanctioned sport by the NCHSAA, but the Titans played in the N.C. State Field Hockey Association tournament before losing to eventual state champion Cardinal Gibbons in the first round.

Westmoreland said that the Titans should be in the mix to compete in the conference with Reynolds, which went 8-0 in league play last year. However, the Titans lost four seniors from last season — Kelsey Bryant, Anna Frucht, Emma Fuehrer and Mia Laws.

“Emma Fuehrer, Mia Laws and Anna Frucht were my three back defenders, so now this year, I’m trying to rebuild my defense,” Westmoreland said. “And I think I have a strong defense this year.”

As for the sport itself within the state, it could one day be a sanctioned sport by the NCHSAA with the help of club teams like Fusion to help develop the game in middle schools.

‘I think if we can do that, I think we’ll be a sanctioned sport within the next couple years,” Westmoreland said.