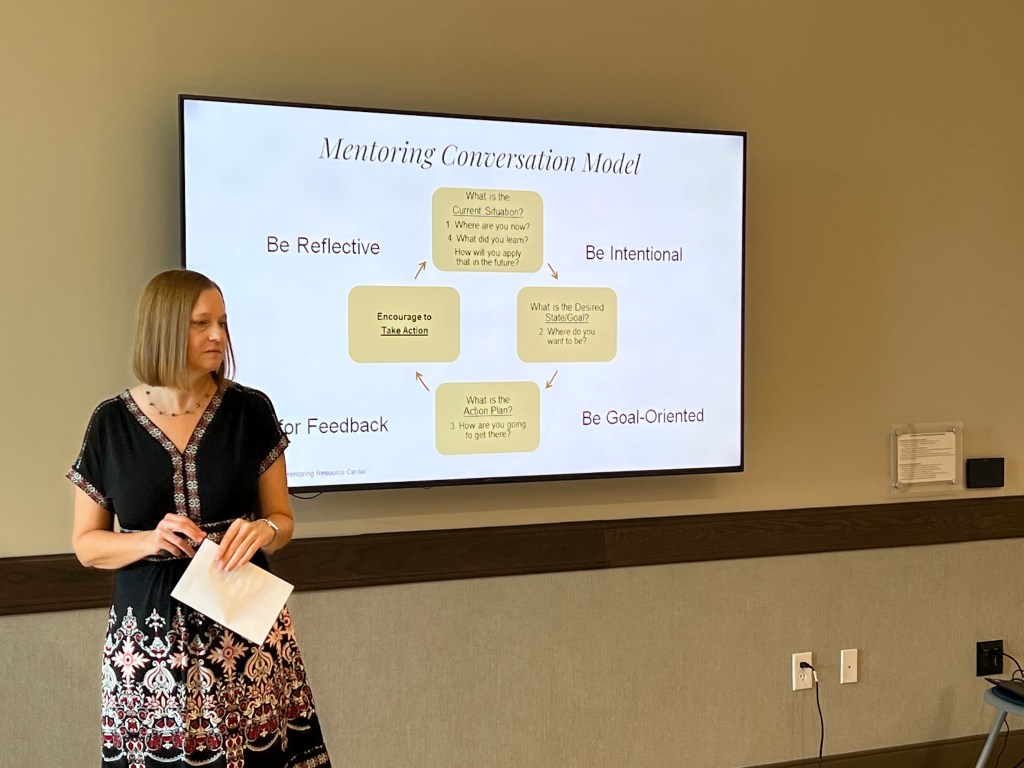 What is mentoring? Is it teaching? Being a counselor? A surrogate parent, a friend, a coach or manager? Several community members learned last week that mentoring contains elements from all those things.

The Shallow Ford Foundation, a community foundation serving Clemmons, Lewisville and Yadkin County, sponsored a workshop specifically for individuals serving in the role of mentor as part of a scholarship awarded through the foundation. The workshop offered on Aug. 9 at Lewisville’s Mary Alice Warren Community Center included members of the Salem Glen neighborhood, Reynolda Rotary Club, BNI Advantage One, The Lewisville-Clemmons Chamber of Commerce and Yadkin County’s Shore Scholars program, which serves students at Forbush and Starmount High Schools.

What mentoring is — and is not — was unpacked and discussed in depth during the morning session, led by national expert, Dr. Allison E. McWilliams. McWilliams is assistant vice president for mentoring and alumni personal and career development at Wake Forest University and has written on the topic for Psychology Today, among other publications.

While mentorships can vary in formality, goals and other aspects, some things are universal, including commitment.

“Mentoring only works when both people make the commitment to show up for each other, consistently, and work to build a relationship based on trust and mutual respect,” McWilliams said. “At the end of the day, these are relationships between humans. Like any other relationship, mentorship requires intention, care, and work to be successful.”

The workshop concept came out of the foundation’s desire to better support its scholarship partners. 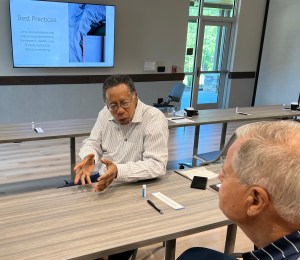 “The foundation has the privilege of helping facilitate many scholarships on behalf of local donors, several of which have a mentor component,” Program Officer Greg Keener said. The foundation encourages mentor pairings with scholarship recipients to better ensure a student’s success in their career preparation. National and state data documenting student drop rates from secondary education suggests that many students need additional support in navigating their post-secondary education and balancing life demands.

“We envisioned mentoring as more than just meeting for coffee and offering advice,” Keener said. “Talking with Allison affirmed our thinking and helped us better understand how robust a mentoring relationship could be. We wanted to offer this special training opportunity to help and support our partners in their admirable goals to help students be successful.”

Ken Burkel is a resident of Salem Glen and is actively involved with the Salem Glen College Assistance Program. This year, one of the two scholarships awarded from this program is given in honor of Jerome (Fritz) Burkel, Ken’s uncle. He will also serve as a mentor to Chantel Gillis, one of the recipients this year. Chantel, an adult student, is studying nursing at Davidson-Davie Community College. As luck would have it, Chantel and Ken were having their first meeting just hours after this workshop.

“I met with my mentee the same day and was able to apply several of the goal setting tools provided in the seminar,” Burkel said. “My student was most appreciative that someone was willing to devote the time and energy to help her be successful. We were both very excited to meet each other and get started.”

The workshop allowed participants to get to know one another and trade personal experiences with mentoring. They also left the training with conversation starters, templates for planning, and other resources to improve their mentoring.

“Allison brought this group many fantastic insights and practical tools,” Keener said. “I saw so much note-taking and head-nodding. I know this group of mentors will approach this work in a much deeper way as a result.”

That deep work will make a big difference. “Starting college brings not only excitement, but fear and apprehension as well. Knowing you have a mentor helps address uncertainty and fear,” Burkel said.

For more information on setting up a scholarship award with mentoring, contact the Shallow Ford Foundation at 336-663-6794 or email greg@shallowfordfoundation.org.

Greg Keener is program officer for the Shallow Ford Foundation.