‘It’s more meaningful because we all played here’ 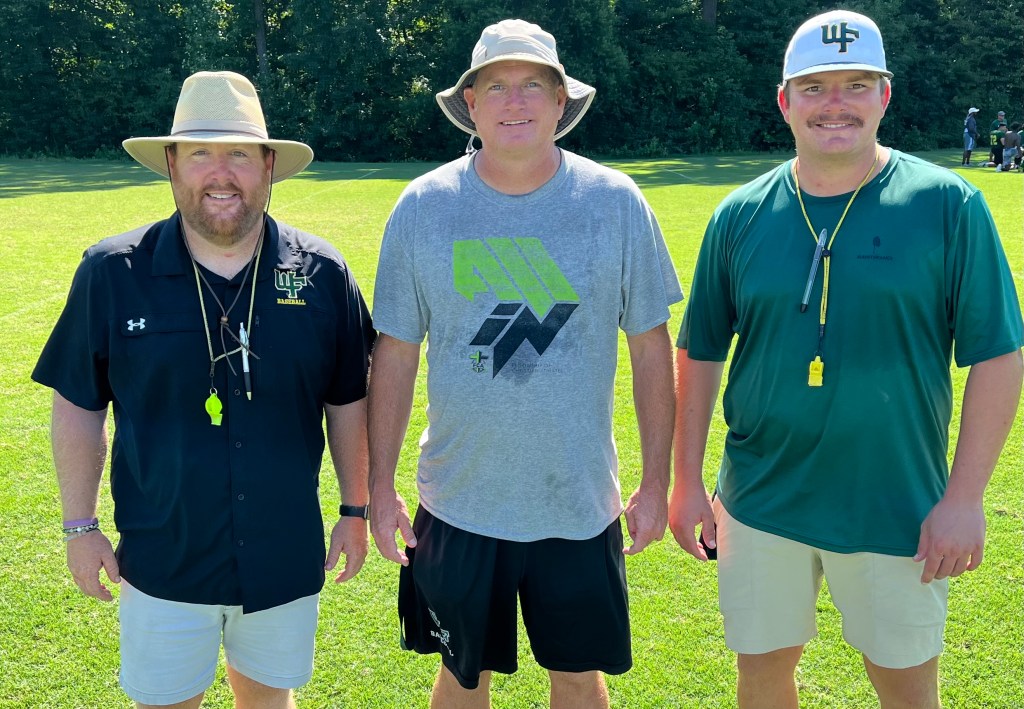 Assistant coaches Bovender, McIntosh and Willard all played at West Forsyth and now coach at their alma mater

Stop by any West Forsyth football practice and you’ll see Jon McIntosh, Brad Bovender and Kyle Willard working with their defensive players as they run through drills or making sure they are in the right spots for a certain coverage or explaining to them how the play in front of them may unfold.
McIntosh, the defensive coordinator, oversees the schemes that Bovender and Willard teach the defensive backs as their position coaches.
The three work closely together, so much so that Bovender will joke with head coach Adrian Snow that they don’t need to attend the weekly meeting to game-plan because they already have it figured out from all the texting and messaging they do with one another.
All three of them also played football at West Forsyth, so the pride they feel now that they are all coaching the Titans is on another level.
“It makes it that much more special because you really care,” said Bovender, the oldest of the three who graduated from West in 1994 and began as an assistant coach in 2003. “It’s not a job. It doesn’t feel like work. It’s more meaningful because we all played here, too.”
McIntosh, who described himself as an “undersized offensive lineman” during his playing days, graduated in 2004. He started coaching at West in 2009.
“I weighed about 180 pounds. I just cut people all the time. That’s the only way I could block them. I’d snap the ball and dive at their knees,” McIntosh said with a laugh.
Willard, the youngest of the three, was a tight end and receiver who graduated in 2012. Snow was his head coach. McIntosh was Willard’s position coach during his senior year, McIntosh’s first year of coaching, and Bovender was on the staff.
“I didn’t really know what I wanted to do once I graduated from college when Jon (McIntosh) called me and told me they had an opening on the football staff and he asked me if I’d be interested,” Willard said. “It’s worked out really well.”
Bovender was on the staff when both of them played.
“Jon was nasty and was always willing to do the dirty work, get muddy, not afraid to hit people,” Bovender said. “He knew he wasn’t going to overpower anyone. And Kyle was always cerebral in his approach. Ran great routes, always blocked the guy he needed to block. Those are the kinds of things coaches notice, which is probably what helps them now. But seeing them both now where they are and seeing them as players, that’s really the most rewarding part of all of this for me. Having those relationships is the best part.”
Both Bovender and McIntosh grew up attending games at West in the late ’80s and early ’90s. Bovender has been around football his entire life — his father Jim was the head coach at Carver for more than 20 years and his older brother, Gray also played at West.
McIntosh remembers coming to games at West and playing football games in the grass behind the home side bleachers.
“Both my parents went to school here,” he said. “Both of my brothers went to school here. I grew up wanting to be a West Forsyth Titan. When I started coming to games here, they had some great teams in the early ’90s and were really rolling. I can’t tell you how many times I was Gray Bovender or Titcus Pettigrew in my backyard growing up. I thought it was the greatest thing ever to come over here and watch the games on Friday nights. So, when I got to play here, I felt like I made it as a 14-year-old kid.”
Last season, Bovender came up with a slogan for the defensive unit that the players responded to. If you see a player run towards the student section to celebrate during the game with a hard hat on, that means he made a big play for the defense.
“We like to say we hang out hats on our defense and it was just something fun we came up with to help get our kids going,” Bovender said. “We feel like you have a better chance of stopping people when you have more pride in winning the play. Let’s not worry about winning the quarter, winning the half. Let’s focus on winning the play. And anytime one of our guys gets an interception or a fumble recovery, they get to put the hard hat on and go celebrate for a few seconds and then get back to business.”
Willard appreciates all the traditions he has seen since his playing days. He also likes the new ones that have been created.
“I’ve been around the program since when my brother went here a few years before me,” Willard said. “I love all the traditions that Coach Snow has kept in place and now what we started with the hard hat. I think it gives these guys some confidence and some attitude and positive energy. We try to have fun with it.”
All three still love the energy that Friday nights give them. Bovender also shares that now with his daughter, Hannah, who is a varsity cheerleader.
“I think the pride we feel for this school is a lot like an onion,” he said. “Through all the layers and all the way to the middle, we bleed green and gold. It’s been like that forever with West. I think we all feel that.”
McIntosh echoed those sentiments.
“West Forsyth is my home,” he said. “I’m engulfed in the community. For the better part of 30 years now, I’ve been coming here on Friday nights. And I still get the goosebumps on my arms and all my hairs stand up when we walk out before the games and the entire crowd rises up to their feet in the bleachers. That’s just a really special feeling.”