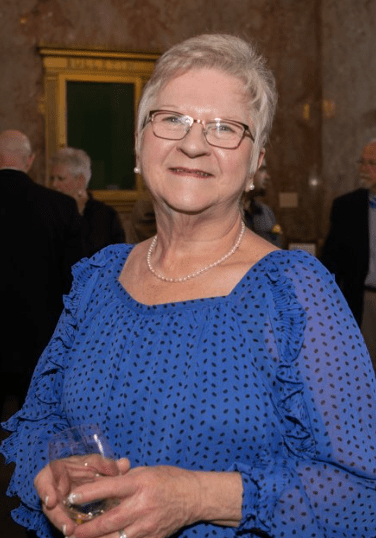 Joyce Fish grew up in Waynesville as the middle child of three siblings.
“I was a tomboy,” Fish said with a laugh. “I enjoyed doing mountain girl things from making mudpies to creating playhouses in the woods. I would also play ball with my brother and his buddies in my free time. I don’t think my brother enjoyed that too much.”
Fish’s love for baseball was strengthened as she spent many days at the ballpark watching her dad coach Little League baseball.

When Fish graduated from high school, she decided to go to hairdresser school. “For the longest time that’s what I thought I wanted to do. And I did that for a couple of years, until I met my future husband, Terry. That began my career in volunteerism and passions for nonprofit,” Fish said.
Terry and Joyce met through mutual friends.
“I first met Terry when I was sitting on a porch, and he lived across the yard from a friend of mine. Not too long after he went camping with his family and I went with their friends. We were soulmates to the core. We stayed up talking until 5:30 a.m. and after that I knew his life story and he knew mine. It was just so easy right from the start,” Fish said. “I remember going home and telling my mom after that first night that I had met the man I was going to marry.” Terry and Joyce were married seven months later in 1976.

Joyce and Terry expanded their family not long after they got married. Son, Matt was born in 1978 and daughter, Molly just three years later.
“I stayed home to raise the kids for 14 years,” Fish said.
A friend of Fish asked her to consider a part-time position as an activities director for a senior center. Fish also found her talents were needed working in vocational education, which she did for about 12 years as a substitute teacher.

As the children got older, Fish looked into positions that were full time. “I had applied for the director of volunteer services at the Westcare Health System position. They decided to put me in marketing instead. After six months the president of the hospital came to see me and said that I was the person that should have been hired for that position. At first, I wasn’t certain I would want to take it, but I did, and it was a wonderful beginning in the ins and outs of helping grow volunteer bases,” Fish said.

Fish’s knowledge of how to recruit and retain volunteers made her a good fit for her positions at AIDS Care Service, Lexington Memorial Hospital, and the Habitat for Humanity in volunteer outreach.
Fish stayed busy leveraging the respective organizations’ existing network and cultivating new relationships to improve their volunteer services and outreach related to the mission of their institution.

“One of the benefits of my jobs was that I got to work with great people,” Fish said.
“In 1999 I was working with a small business owner for an activity with the AIDS Care Service. I met a board member from the Animal Adoption and Rescue Foundation (AARF). At that time, I had been helping rescue cats in the area on my own and incurring all medical expenses. She had told me that if I volunteered with AARF that I would be able to get support to help those cats and kittens in the community. It was the beginning of finding my second family at AARF,” Fish said.

Fish initially began volunteering at AARF with cats and kittens primarily. After fostering for a bit, Fish was asked to consider leading the cat team program on a volunteer basis, which she did while working full time. “I don’t remember what year it was but sometime a few days after Christmas someone found a puppy in the parking lot of Hanes Mall. The kind Samaritan brought it to the AARF facility, and Terry was there with me too. When Terry saw that puppy, he extended his arms and held it. We named her Ellie Belle and that began our journey to help the dogs at AARF. It has been a memorable journey including our first “foster fail,” which is when you realize the home that the dog was needing was your own,” Fish said.
“Our first foster fail was Ernie. He had to have hip surgery from the abuse and neglect he endured at the hands of his first owner. Ernie was forced to live under a crawl space with his siblings. We helped raise money for his surgery, and that sweet boy laid on his bed at an event and licked the people that came by as we told his story.”

Fish spent years heading up the dog team before officially becoming staff last July as the dog intake and adoption coordinator.
“AARF is my second family. When Terry passed away in 2019, they were there for me with their arms open. When my son, Matt, passed unexpectedly this spring once again they comforted me in my most difficult time,” Fish said. “Both Matt and Terry were cremated, and their ashes were spread in the foundation of the new AARF building that was recently opened. Terry was put in the double doorway in the dog area so he can still greet people as they come in. And Matt isn’t too far from where we put his ashes so they can be together again. AARF meant so much to Matt and Terry too. We had their celebrations of life at AARF because of it.”

Fish continues to find comfort from saving the lives of abandoned animals to help her with grieving of the two main men in her life. “My daughter Molly has been an incredible source of comfort too. We live together right now, and I am so grateful for that. She also enjoys helping out at AARF and I love that we can share that together,” Fish said. “I could write a book about all that has transpired while spending my time at AARF. It has been quite a ride, and one that I will be forever grateful for.”