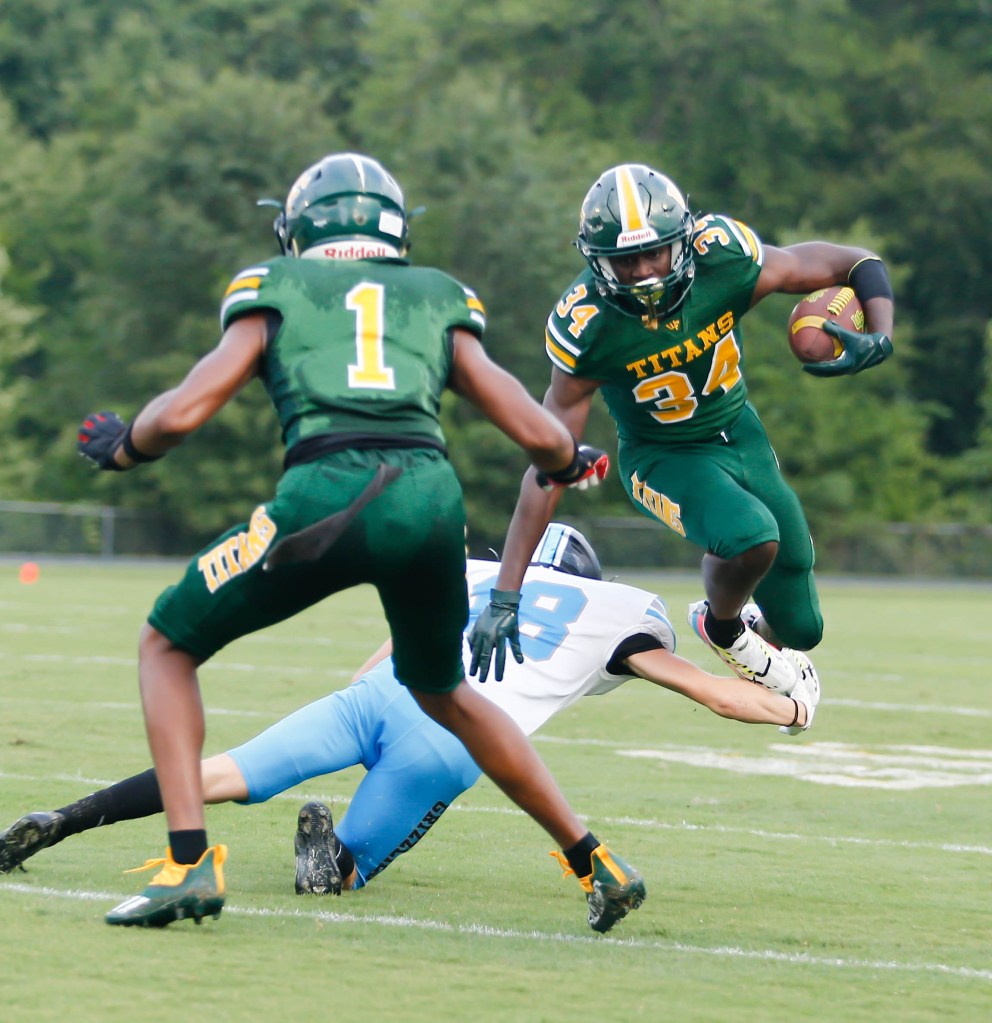 Matthews Weddington up next for West Friday night

After a season-opening loss last week at Asheville Reynolds, West Forsyth was hoping for some home cooking Friday night in its home opener.
It didn’t happen, however, as Oak Grove downed West 23-14 at Jerry Peoples Stadium after holding the Titans scoreless in the second half.
West fell to 0-2 for the first time since 2011 and things won’t get much easier next week.
Matthews Weddington, which has won three NCHSAA state championships since the 2016 season began, will come to Clemmons next Friday.
“We were just trying to get going, and we’re not going to make excuses,” Snow said. “I’ve never been that way and I’m never going to make an excuse here. So, the biggest thing is I told our guys I’ll be back here on Monday and ready to work.
“We’ve been part of a lot of successful years here. We’ve only played two games, but we’ll call it uncharacteristic, but at the end of the day what we have to do is get back to work and get better. That’s all we can do.”
Oak Grove (2-0), which opened in 2017, rushed for 317 yards on 47 carries, and quarterback Connor Creech finished 13-of-22 passing for 174 yards as the Grizzlies piled up 486 total yards.
West Forsyth was led by Caman Chaplin’s 118 yards on 23 carries, including a 74-yard touchdown and quarterback Bert Rice was 11-of-22 passing for 84 yards.
Oak Grove has had some success, but Friday’s win against West could be the school’s signature win.
“In the grand scheme of things, it’s a nonconference game, but just against a great program,” Coach Mark Holcomb of the Grizzlies said. “We talked about that all week — believing. We’ve been here before, and they’ve come to our place before. We didn’t believe we could win then. We talked all week about believing we could win.”
The Grizzlies went on their first scoring drive with five minutes to go in the first quarter. The drive finished seven plays later after Ethan Yarbrough caught a 30-yard touchdown pass from Creech to help take a 7-0 lead with 1:58 left.
On the ensuing kickoff, Oak Grove attempted an onside kick. The kick was executed perfectly, but the Oak Grove player jumped on the ball and squirted out, allowing West to recover.
The Titans’ possession stalled, and after the punt, the Grizzlies took over on their own 17. Seven plays later, Creech zipped a 50-yard touchdown pass to Peyton Parker with 9:30 left in the second quarter to help push the lead to 14-0.
“I thought they (Oak Grove) were good,” Snow said. “I thought they did some good things. Their quarterback is a good player. Savvy, does a good job.”
The Titans answered two possessions later. Chaplin broke through the line and scampered 74 yards for a touchdown with 4:44 left to slice the lead to 14-6. However, Alejandro Morillon’s kick for extra point was blocked.
“They were just putting everybody in there (the box up front),” Snow said of Oak Grove’s defense. “We had to hit some throws, and sometimes we didn’t.”
Oak Grove took over at its own 20 with 55 seconds left. With 5 seconds left, it had the ball on the West Forsyth 37. Holcomb elected to try one more play. Creech threw an out-pass to Jake Smith. Initially, the officials said the clock had run out. However, after a brief consultation, they put 1 second back on the clock.
Holcomb sent Daugherty out to attempt a 50-yard field goal. The kick was blocked, and Marcus Wilson of West Forsyth picked it up and raced in for a touchdown to make it 14-12.
“Good things started happening early for us, and then I screwed up and started coaching right before the half and got that field goal blocked, which is absolutely idiotic,” Holcomb said. “I shouldn’t have done it. I got greedy.”
After Wilson’s touchdown, Snow went for a two-point conversion. Jordan Stephens scooted in to knot the game at 14-14 at halftime.
“That was a big deal,” Snow said. “Going. Into halftime, you’re 14-14. That was big momentum. I think it made them believe.”
In the third quarter, Kaden Hart of the Grizzlies scored on a 53-yard run with 2:22 left to help take a 21-14 lead. Hart finished with 130 yards on 22 carries.
“We felt like we should’ve been ahead (at halftime),” Holcomb said. “It was kind of a gut punch when you go in 14-14, but I thought our kids handled it well. They responded there to each to each other.”
Any chance West Forsyth had to come back was erased after Chaplin was tackled in the end zone for a safety with 3:55 left in the fourth quarter to extend the lead to 23-14 after an Oak Grove punt was downed at the West 3-yard line.
“I think they stood up, too,” Snow said. “They coach their guys just like we do. Sometimes that happens. The biggest thing is, we’ve just got to continue to work and get better.”