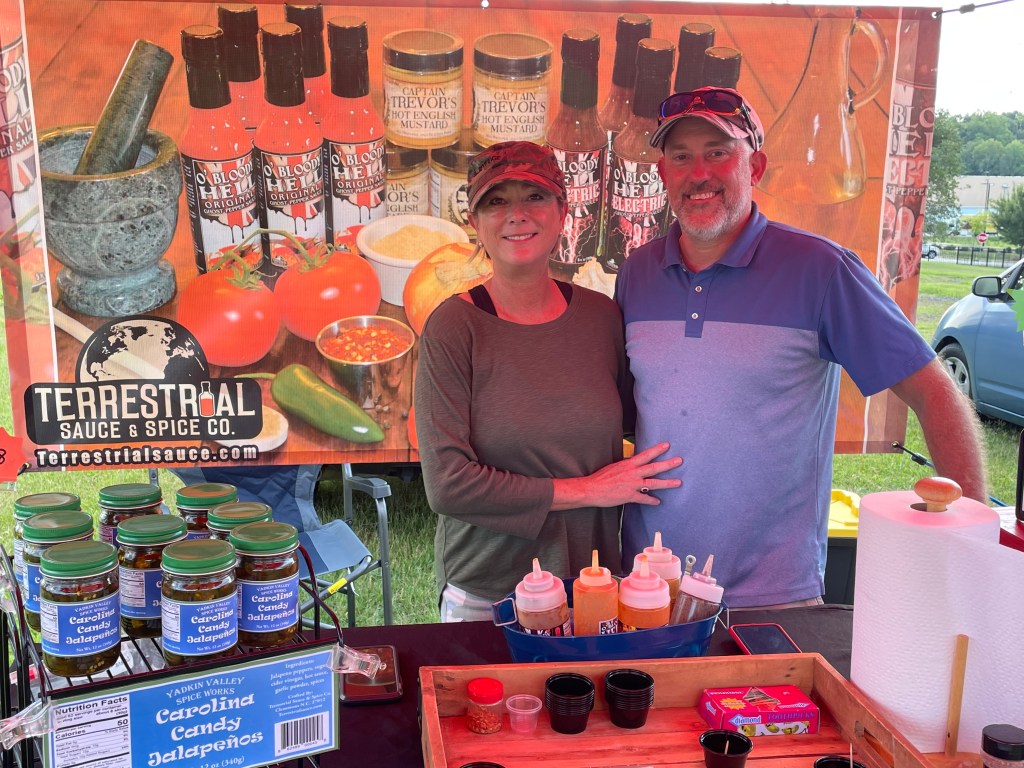 Jim Buice photo Vicki Braswell and her husband, Chris, have a variety of sauces and spices on display at the Clemmons Farmers Market through their business, Terrestrial Sauce & Spice Co.

From certified acidified foods to hydroponic farming, there’s something for everyone at the Clemmons Farmers Market.
Take Terrestrial Sauce & Spice Co., for example. Vicki Braswell retired from a career in the classroom after 30 years, including the last five as a science teacher at West Forsyth, to totally embrace a new venture with the lessons she taught — including non-sustainable approaches to food manufacturing.
Combining a love for food and a passion for flavor, she and her husband, Chris, created a business centered on creating barrel-aged pepper sauces, mustards and other flavorsome products.
Then there’s Yellow Bell Farms, launched by Ann Anderson, a retired nurse who raised a garden while working before beginning to sell some of the traditional goods and then adding hydroponic farming.
Shannon Ford, marketing and communications director for the Clemmons Village Council who coordinates the farmers market, said that Yellow Bell Farms is her only farm dabbling in hydroponics, which involves the process of growing plants in sand, gravel or water/liquid — with added nutrients but without soil.
These are the kinds of vendors, along with many others, that set up shop on Saturday mornings from 8:30 a.m. to 11:30 a.m. through Oct. 1 at the Jerry Long Family YMCA on Peace Haven Road, to sell their wares and share their unique stories. 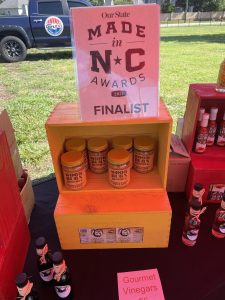 Jim Buice photo
The Wood Burn Reserve Bourbon Barrel Mustard made by Terrestrial Sauce & Spice Co. was a 2021 Finalist in the “Our State” Made in NC Awards contest.

Vicki Braswell recalls how Terrestrial Sauce & Spice Co. as what her husband called “a little hobby” eventually turned into much more than that.
“We started growing some peppers for some friends of ours about six years ago,” she said. “They stopped making their product and had all these peppers, so my husband said, ‘Let’s try making a hot sauce.’ I like to cook, so we just tried different recipes and giving away sauces to our friends. Then one of our friends asked if we’d make a hot mustard, so now our mustard is one of our biggest sellers.”
In fact, the Wood Burn Reserve Bourbon Barrel Mustard was a 2021 Finalist in the “Our State” Made in N.C. Awards contest. Terrestrial Sauce & Spice Co. entered its Candy Jalapeños in this year’s competition.
“I’ve got a little more time on hands to make those since I retired from teaching,” said Braswell, who is originally from England.
That includes more experimentation with the hot sauces, mustards, jalapeños and the like, and perhaps more markets and getting the company’s products into more local stores. The Braswells live in Clemmons.
“Our biggest is probably the Oyster Festival in Ocean Isle Beach,” she said, “and we now have our products in the Clemmons Country Store and Musten & Crutchfield Food Market in Kernersville.”
Her husband, Chris, who was with Vicki at their booth at the Clemmons Farmers Market, has a full-time job as wine distributor, said, “It’s mainly her, and I help out where I can.”
Vicki said he does all the labels and marketing while she does “all the making.” They also do the bottling. She went to N.C. State to get her certification in acidified foods to meet all the requirements for her latest endeavor in the science arena.
Braswell said that her vision has always been to produce small-batch products sourced from local farmers using fresh ingredients and natural preservatives.
Certainly, their business has added a special kick to the Clemmons Farmers Market. 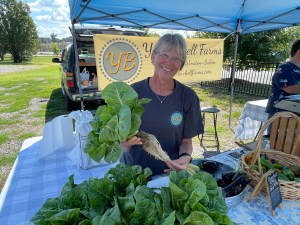 Jim Buice photo
Ann Anderson of Yellow Bell Farms has a long history of gardening but recently added hydroponic farming to the mix.

Ann Anderson laughs when talking about how her goal of having “a golf cart fund” led to the creation of Yellow Bell Farms.
Actually, gardening became her “therapy” while she was still working a full-time job, but then Anderson had more corn, beans, tomatoes and other produce than she and her family could eat or can.
“While I was working, I said, ‘I’m going to start taking stuff into work,’ but people didn’t really show a lot of interest,” she said. “Then I said, ‘I’m going to sell this stuff.’ People would come by, and they’d buy the produce. I said I’m going to start a golf cart fund because we always go camping down to Ocean Lakes every year. And to rent a golf cart is expensive, so I said, ‘I’m going to make enough money to rent my golf cart.’ That’s how it all started.”
She and her husband, Larry, who worked for the City of Winston-Salem as a fleet manager and is also retired, have land in Davie County about six miles east of Mocksville.
With more bountiful crops, Anderson decided to take the next step in 2015 while she was still working, when her husband and daughter-in-law would go to the Bermuda Run Farmers Market, “and then I would get off work and go by there. And everything just evolved from there.”
Then came the expansion to some hydroponic farming about five years ago.
“My husband just got really interested in it and he started watching YouTube videos,” Anderson said, “and he said, ‘I think we can do that.’ So we started out with just boxes with water in it with no circulation and that worked well. We’re still using that method.”
They grow lettuce, basil and bok choy, and Anderson said that Yellow Bell Farms has tripled its production this year.
“We grow outside — not in a greenhouse, which most people think we do. We start about March and go to mid-October to early November.”
The process includes “a stock tank that we put water and nutrients in. There’s a pond pump in the bottom of that tank that recirculates that water. It runs continually and recirculates back into the tank. The turnaround time from when we put out seedlings is four to five weeks when it’s ready for harvest.”
This is the first year at the Clemmons Farmers Market for Yellow Bell Farms, which also has a regular spot at the Mocksville Farmers Market on Wednesdays from 3 p.m. to 6 p.m. in the parking lot of the old Mocksville Police Station at 278 N. Main St.
“Things have gone very well here,” Anderson said of the 2022 addition of the Clemmons market to her schedule. “We believe that every meal is a reason to celebrate. We strive to provide the freshest, highest quality produce possible so that you can fully enjoy the flavors of each season.”