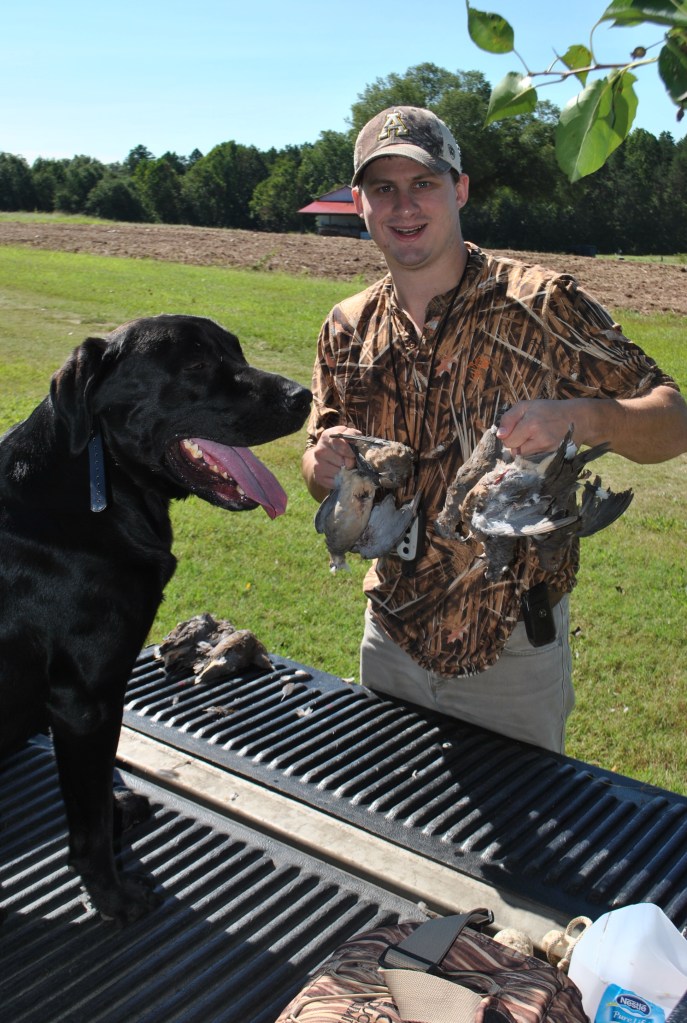 Dan Kibler photo Andrew Kibler and his dog, Buckshot, with their haul of doves from a hunt a few years ago

I can remember, as a kid, getting very little sleep the night before the third Saturday in November — opening day of deer season in my neck of the Virginia woods. My father occasionally allowed me to skip a day of high school for opening day; I understood — from hunting buddies above the Mason-Dixon line — that opening day in much of Pennsylvania was actually a school holiday.

With so many hunters now greeting a handful of deer-season openers — archery, blackpowder and gun — across four different sections of North Carolina that all stagger their seasons — opening day of deer season doesn’t carry as much weight as it did back in 1972, when I skipped school but got back in time for driver’s ed in the afternoon.

Nowadays, there is one hard and fast opening day that I put on my calendar almost immediately after dates are announced. It’s usually the first Saturday in September, but it often winds up being Labor Day. It’s the day doves suddenly become the most important game bird or animal across much of the Southeast.

Opening day of dove season is a rite of passage for many hunters. It’s the official kickoff of fall hunting, when guns get retrieved from safes and cabinets for the first time in months, when hunting clothes get a thorough machine washing, when boxes of shotgun shells are sorted by gauge and shot size, and even more purchased. Often, it’s a great excuse for barbecue to be bought or smoked and served to big groups of acquaintances at the end of the morning’s festivities — or the beginning of afternoon festivities. Or it’s venison sausage biscuits at daybreak and dove on the grill, wrapped in bacon and maybe stuffed with jalapeño, at the end of a morning hunt.

I have spent some wonderful opening days in North Carolina, Virginia and Georgia over the years, killed a lot of limits — this year, again, it’s 15 birds — and admired great wing-shooting from guys far better than me. This season, North Carolina hunters get a three-part season: Sept. 3-Oct. 1, Nov. 5-26 and Dec. 10-Jan. 31, 2023. Legal hunting hours are 30 minutes before sunrise until sunset.

I think I’m safe in saying that quite a few hunters got their start in a dove field, first sitting on a stool beside an older relative and watching for doves to enter the field and marking those that don’t make it, then graduating to a dove stool and something like a side-by-side, 20-gauge double-barrel choked improved/modified.

My son and I have prepared dove fields the past two seasons — sorghum in strips surrounded by millet the first year, sorghum in strips with plowed fields oversewn with wheat. The doves were really in there in 2020 — at least a week before the season. Then, some storms bringing torrential rains and cooler weather ran them out and we had just a few on opening day. They were in there last season, thick enough for good hunts on the opening Saturday and on the morning of Labor Day.

Hunts the past handful of years have been very, very special. My son, now 30, decided that he wanted, for his Appalachian State graduation present back in 2014, a Labrador retriever puppy. I found a friend with a litter already in the oven, so to speak, and spoke for a male puppy long before they arrived on April Fool’s Day. We picked out little Buckshot the week before graduation and picked him up on Memorial Day weekend. He has accompanied us to opening day dove shoots ever since, and he’s made them even more memorable than they were before. His son, Boone, joined us on opening day last year, and there were enough doves for both of them.

If North Carolina’s deer herd didn’t get enough bad news with the discovery of two CWD-positive whitetails in the last 8 months, now they’re dying all over several areas across the state from a different ailment.

The N.C. Wildlife Resources Commission said hunters in the Foothills, Piedmont and Coastal Plain are likely losing deer on a regular basis from an outbreak of hemorrhagic disease — a regular visitor to North Carolina whitetails, especially during hot, wet summers.

Moriah Boggess, the commission’s deer biologist, said the agency has received reports of deer affected by hemorrhagic disease in 39 counties, with the highest frequency being in the Foothills and Piedmont. Both major hemorrhagic diseases — bluetongue and Epizootic, have been confirmed in samples.

Hemorrhagic disease is spread by biting midges during the summer and into early fall. The disease will typically disappear at the first frost and will leave local herds immune for a handful of years.

On the hunting side, the commission voted on Aug. 18 to restrict the use of some natural deer attractants and scents in the Primary Surveillance and Secondary Surveillance (CWD) areas.

The General Assembly had already prohibited the use of substances that include cervid excretions (bodily fluids or glandular oils) to attempt to attract and take deer, except for natural deer urine collected from a facility in North Carolina with a valid Farmed Cervid License and labeled as such, and excretions collected by a hunter from a deer legally harvested in North Carolina. It does not affect synthetic scents or products labeled as part of the Responsible Hunting Scent Association’s Deer Protection Program.

What the commission’s latest decision does is prohibit the possession and use of any excretion collected by a hunter from a harvested deer in the surveillance areas.