‘This is still my happy place’ 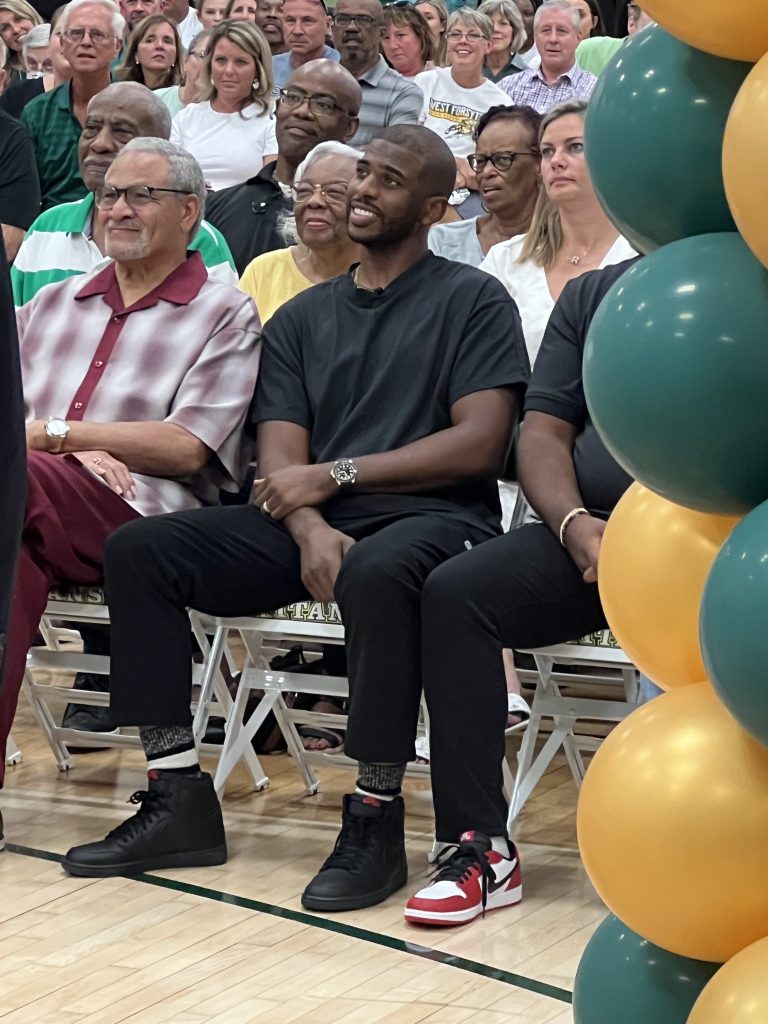 Marc Pruitt photo Chris Paul is all smiles while listening to Kurt Telford, the former principal at West Forsyth, tell a few of his favorite memories about the NBA superstar's time as a Titan 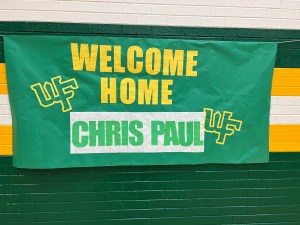 The gym at West Forsyth High School was always a sanctuary for Chris Paul during his four years as a Titan.
And yes, that includes the old gym — the one that still has the tile floor, as Paul noted during his remarks during the ceremony to honor him last Thursday.

Paul, who is about to enter his 18th season in the NBA, made a name for himself by spending countless hours crafting his basketball skills in Harold Simpson Gymnasium during practices, games, off-season workouts and even some early morning and late-night workouts.
And now his name is a permanent fixture on that very gym floor that Paul called his “happy place.”

Chris Paul Court was christened on Sept. 1 during a celebration that included the Paul family, current and former teachers and school administrators, friends, community members and students at West Forsyth. 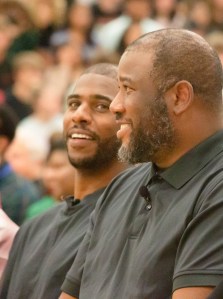 Brad Richard photo
Chris Paul and his brother, C.J., share a laugh while listening to their former coach, David Laton, share some of his favorite memories

“Let’s just be frank. It feels like a reunion in here,” West Forsyth Principal Kevin Spainhour said. “It’s a special day here at West Forsyth. The Classes of 2023 and 2024 in attendance and nearly 1,200 students watching the live stream across campus because we can’t fit everyone in ‘The Village’ in the gym. This is a day of celebration that you will talk about long after you graduate.”

“To be here today, I’ve been so blessed and so fortunate in my life to travel, to do so many things with basketball, to play on Olympic teams, but you never forget where you came from,” Paul said. “I’m 37 years old now. I remember coming to this gym since I was 13, 14 years old. I was fortunate enough that Tim Fuller (an assistant coach at the time) gave us a key to the gym. I lived on 801 Lewisville-Clemmons Road, just down the street, and I used to come up here late at night, after school, if I didn’t feel like going up to the Y. I would come up here to this gym and I would hoop. It was my happy place. It still is my happy place. I’m so grateful for what the game of basketball has brought me. A lot of that has to do with a lot of the relationships that were built here.” 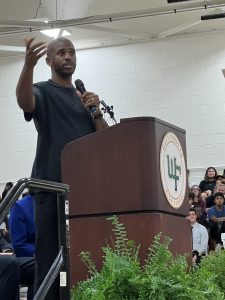 Marc Pruitt photo
Chris Paul addresses the gathering of West Forsyth students, friends, family members and other distinguished guests last Thursday durind the ceremony to dedicate the gym floor at his alma mater in his honor.

Spainhour, a former basketball coach and player, mentioned his career as a “basketball guy” and related to all the time Paul probably spent in Simpson Gymnasium.
“I wonder how many hours Chris Paul has been on this floor?” Spainhour said. “The countless mornings. The countless long nights that he dedicated himself to live out his dreams. I’ve got full confidence as he sits with us today, that this basketball court, although it looks a little different now, helped shape him into who he is. He sat on this court many years ago and he dreamed his big dreams. And now we’re here today to honor him by naming the court after him.” 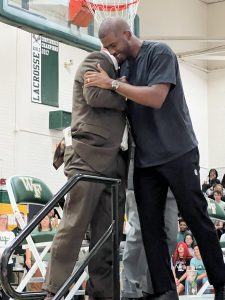 Marc Pruitt photo
Chris Paul hugs West Forsyth Athletics Director Mike Pennington after learning that he will be the first member of the West Forsyth Hall of Fame. Pennington was the basketball coach at Parkland during the game when Paul scored 61 points to honor his grandfather.

David Laton, who coached Chris and his brother, C.J., told the audience that teams that featured Chris — both varsity and junior varsity — never lost a game at Simpson Gymnasium during his four years there. 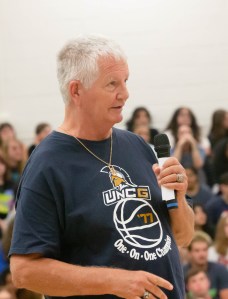 “Coach Laton, thanks for telling me that we didn’t lose a game in this gym when I played here,” Paul said. “I didn’t know that, but it does make sense. We were nice!”

More laughter ensued when Kurt Telford, who was the principal at West went Paul attended school there, shared two stories about Chris Paul the person and student.
“He would stand in the breezeway and hand out Krispy Kreme doughnuts when he was running for class president,” Telford said. “He was the prom king. An honor-roll student. During his junior year, he played in an AAU basketball tournament game in Charlotte, I think, and then came back here later that day to help decorate for the prom. He walked the talk. He was also the only student I ever had that other students would ask for his autograph or ask me if I could help them get his autograph.” 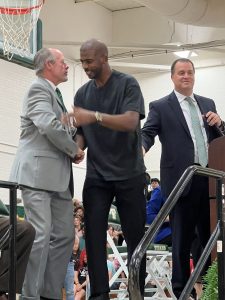 Telford’s funniest memory came from graduation rehearsal for Paul in 2003 .

“As the class president, Chris is going to speak and is supposed to be on stage with the rest of us,” Telford said. “I’m looking around to find Chris and I’m a little miffed because he’s on his phone and we had a strict no phones policy. I walk up to him and can hear him saying ‘yeah, yeah, well congratulations.’ So, I asked him who he was speaking with, and he said ‘LeBron (James) just signed with Nike, Mr. Telford.’ I’m probably not going to experience that as a principal again, so I just let it go.” 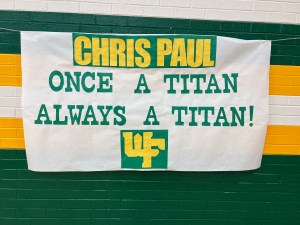 Paul told the assembled students — and the students who were in class following along on the live stream — about his time as a Titan, giving them all a small peek into his psyche and how he built a competitive edge.

“I don’t know if you know that my first two years here at West, I played on the JV basketball team and on the varsity football team, Paul said. “School would get out and I would go to JV practice in the old gym. As soon as my JV practice was over, you know what I did? I ran down the breezeway and came in here to practice with the varsity. Every day I practiced with the JV and I practiced with the varsity. As a freshman and a sophomore. Every day. Coach Laton being hard on me, not putting me on varsity. This might sound crazy, but I needed that. That made me keep an edge. I wanted to walk down that breezeway with a letterman jacket on so bad. But I couldn’t. My dad kept me on JV as a sophomore to keep me motivated. To keep me working. Something I still do to this day. You’ve got to keep working. My freshman year wasn’t what I wanted it to be. But what I did was, I had a goal. I had a plan. Regardless of how much I liked certain classes or teachers or subjects, I knew I wanted to hoop. At the end of the day, you realize that if you want to get to one of your goals, you’re going to have to sacrifice. When I finish here, I’ve got to go work out. I’ve got to go and train because I know that if I want something, it’s not just going to come to me. I’ve got to go and get it. So, my message to all you guys is never to forget where you came from and always show gratitude.
And I say thank you. I appreciate it very much.” 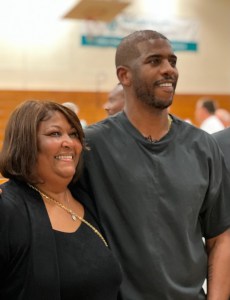 Brad Richard photo
Chris Paul and his mother, Robin, during last Thursday’s ceremony at West Forsyth to name the basketball court after the NBA superstar

Once Paul and his family lifted the covering off the floor to unveil the new logo, Spainhour also informed Paul that he would be the first member of the West Forsyth Athletics Hall of Fame.
The emotions for Chris’ parents, Charles and Robin Paul, were evident when they saw their son’s name and signature on the floor. The three joined in a tight hug, with mom and dad wiping away tears at the magnitude of the moment. 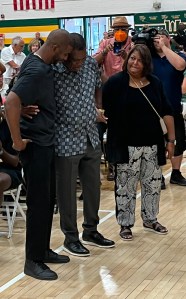 Marc Pruitt photo
Charles Paul (center) and Robin Paul (right) get emotional and are comforted by their son, NBA superstar Chris Paul, after the logo for Chris Paul Court is unveiled at a ceremony last Thursday at Harold Simpson Gymnasium at West Forsyth. 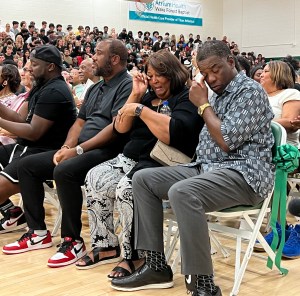 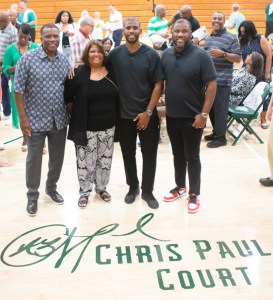 Marc Pruitt photo
The Paul family poses for a photo at one of the new logos for Chris Paul Court unveiled last Thursday on the floor at Harold Simpson Gymnasium at West Forsyth
From left: Charles Paul, Robin Paul, Chris Paul, C.J. Paul

Sept. 1 was a busy day for Paul and his family.
Before heading to West Forsyth, Paul was at the dedication ceremony for the new Paul Family Men’s Basketball Clubhouse at the Wake Forest Men’s Basketball practice facility on campus.
Paul arrived in Winston-Salem at 3 a.m. with his older brother, C.J. to begin his full day. He got a workout in following the celebration at Wake Forest, headed to West Forsyth, and then got another workout in before going to his facility, the Chris Paul Basketball Academy, to speak at two skills clinics at 5:30 and 6:30 p.m. for children from kindergarten through high school.
Paul answered questions and asked some of his own about his career to the participants. If they answered him correctly, they would play the shooting game, “Go For It” with a chance to win several CP3-themed gifts. 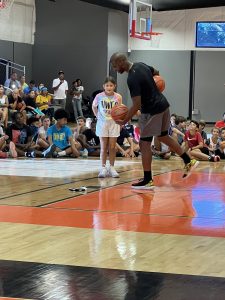 Marc Pruitt photo
Chris Paul goes over the rules to the game “Go For It” with a participant in one of the skills clinics he spoke to at the CP3 Basketball Academy last Thursday. 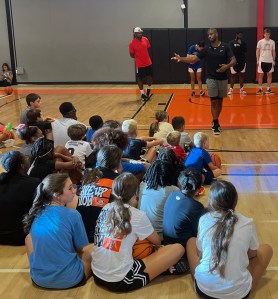 After the clinic, he headed to Winston-Salem State University to speak to the men’s basketball team. He was going to try to get to the Wake Forest football game after that, but also knew that time might not be on his side.
“I may just have to go home and watch it there,” Paul said. “But this has been a really busy day, a really fun day and a really special day.” 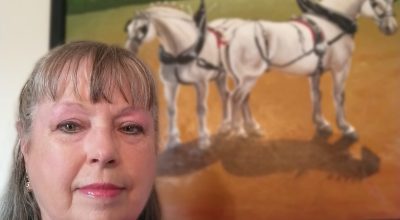