Perfect match: Tennis has been a constant for Sam McEachran and her father, Gordon, who is in his first year as the Titans’ coach 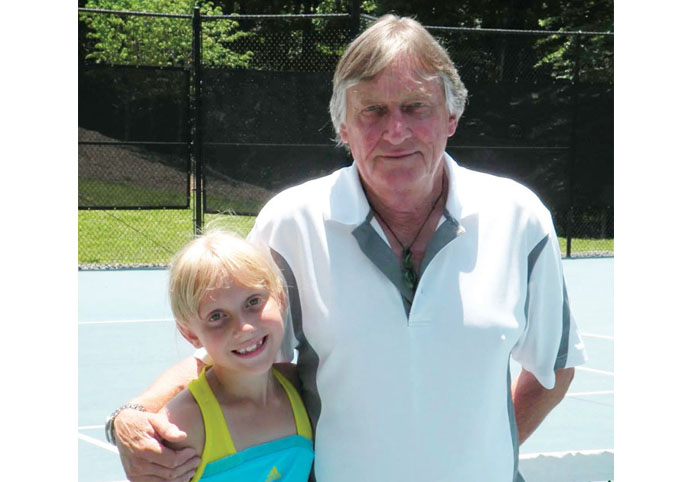 The U.S. Open tennis tournament has been played for the past two weeks, and much of the talk has been focused on how influential parents are to the development of a player.
The same can be said for Sam McEachran, a junior on the West Forsyth girls tennis team, who picked up a racket at a young age after seeing her parents, Gordon and Angie, around tennis courts.
Now, Gordon McEachran, a 73-year-old native of New Zealand, who first came to the United States in 1991 to coach tennis, is in his first season as the girls tennis coach at West Forsyth after replacing Shana Krenz.
And in doing so, he gets to coach his daughter, who is the No. 1 singles and doubles player for West Forsyth.
“Most people would probably be like, ‘Well, I can’t believe my dad’s coaching,’ But I was excited that he was getting to coach because it was like the last two years that he’ll get to coach me before I go to college. I was really excited when he said he was going to do it.”
Gordon McEachran has had smooth sailing since taking over for Krenz. As of Monday, West Forsyth was 5-0 overall and 4-0 in the Central Piedmont 4-A with home matches on Tuesday against Davie and Thursday against Reynolds this week.
Gordon McEachran might be new to coaching high school tennis, but he was the teaching pro at Tanglewood and ran the facility there from 1994-2019.
While teaching at Tanglewood, he met and later married his wife, Angie.
“Both of my parents were big into tennis when I was born, quite literally,” Sam McEachran said. “So, pretty much as soon as I could walk, I started playing.”
Gordon saw that Sam became fascinated by tennis.
“(She) was about 3 before she really started playing. You could see there that she had a lot of (potential),” Gordon said. “She’d been watching everybody. I mean, you know you see more than anything else. So, that’s how she started.”
Even at a young age Sam still has fond memories of stepping on a tennis court.
“I would remember sometimes my dad would take me out and let me join in on the clinics he would do and kind of get me started,” Sam said. “It was different because I was always in with the big kids. But I felt like that helped me a lot because they were older and I got to experience that at a younger age where most people don’t get to do that.”
Fast forward to third or fourth grade, when Gordon noticed something about Sam. She started playing tournaments.
“Probably about 8 or 9 (years old) we knew she had it there,” Gordon McEachran said. “The first tournament she played in she lost in the final. But you could see there was a bit of good there, but I don’t know if you call it arrogance or what. But she was a bit of a fighter. But you could see, technically, she was growing, but that’s about when she stopped listening to me.
“She won’t listen to me. I’ll try and help her and tell her something and, ‘No, no, no.’ Or she’ll say, ‘I am doing that.’ I’m going, ‘If you were doing it, I wouldn’t tell you.’ But I think it’s getting a little better.”
Playing up in competition made Sam a better player.
“I typically play better against better players,” she said. “My first tournament, I think I got second in my first tournament in the 14s. So, I definitely picked up a lot from playing with the older kids.”
While at West Forsyth, Sam hasn’t lost a regular season match during her first two years on the team. She has lost in the regionals each year. Last year, she lost to Merritt Wilson, who is now a senior at Marvin Ridge, in the quarterfinals in three sets. In order to qualify for the state tournament, you have to reach the regional semifinals.
“I remember, I think every school had somebody from our conference in regionals last year. And I was one of the last matches of the day,” Sam said. “And every single person that was there stayed to watch my match. So, I had 30 people there cheering for me.
“And even though I lost they came up and congratulated me. And I remember crying because I just felt so happy that I did so well and they were all there to support me.”
Sam received her citizenship to New Zealand last year, making her a dual citizen.
“That definitely brought me closer with my dad with that aspect,” she said. “Very proud (of it).”
Gordon McEachran does have limitations on what he can do as a coach. He has COPD. To compound it, Gordon contracted COVID-19 this past spring and spent three weeks in the hospital. But he does have a golf cart to ride on and an assistant coach, Jeff Rickert, who is a teacher at West.
In West Forsyth’s match last week against Reagan, Sam McEachran defeated junior Elizabeth Tomblyn 6-0, 6-1. She also teamed with senior Vivian Do to win their doubles match 8-2, helping West Forsyth win the overall match 6-3.
“She’s as good as the top players, and I’m not saying that just because I’m her dad,” Gordon said. “But because she can’t get the consistency of training she’s not winning.
“You’ve got to have these tough draws and long hitting sessions and stuff to be good. But ability-wise, she’s up with the rest of the top kids.”
Even though she almost two full high school seasons left, her ultimate goal is to play college tennis at Furman. She knows what she needs to work on to make that happen.
“I definitely think playing some more tournaments with a lot better competition than me to study what they do,” Sam said. “And definitely outside of school, just getting into shape and getting my mental game a lot better.”