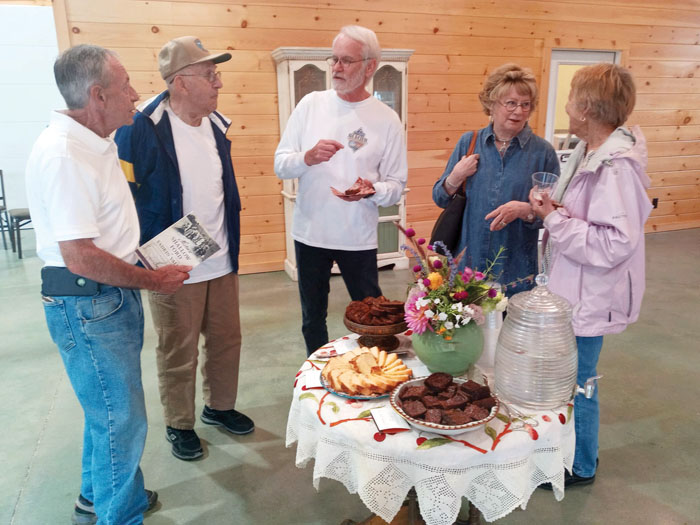 Food references are juicy ingredients in any story, and I’m hooked. But when a tale combines food with history, the author’s reeled me in.

In her recently published book, “Historic Shallow Ford in Yadkin Valley,” Marcia Phillips casts a net of historical research that compels readers to want to know more. While the rocky road traveled might have been shallow, its significance in history runs deep. Like all history, the road was of great value and still is. The place has big stories to tell — a path of wet rocks that served as a gateway to the Western North Carolina frontier. A skillful writer, Marcia takes readers with her, crossing that path like the ones who came before us.

Early pioneers who traversed the waters represented different people groups and eras. Crossing the shallow ford goes back to a time in history when Eastern Carolina was still strongly tied to England. The area was the cradle, a training ground for trans-Appalachian western settlement, not just in North Carolina, but in Kentucky, Tennessee, and beyond — like the first frontier.

A few of the book’s fascinating stories include how English explorer John Lawson described eating heritage persimmons, an old type still found locally. Lawson humorously described his all-puckered-up experience, “if eaten before (ripe), draws your Mouth up like a Purse, being the greatest Astringent I ever met.” Lawson also referred to seeing an Indian technique for drying venison — a cooking style he called “barbaku.”

Tax regulators were the first revolutionaries, and fought Governor Tryon over taxes to support England. When the colonies’ relationship with Britain went sour, the regulators couldn’t take the heat and got out of the kitchen, so to speak, hightailing it to the hills. The story has it that home cooks, afraid to take them in, would bake bread and put it on the posts along the trail so the regulators wouldn’t starve to death.

The book also includes an interesting local tidbit — Revolutionary War General Cornwallis describes his attempts to trudge through mud, saying it was like plodding through pudding and difficult. I’m sure he meant like British figgy pudding, which was filled with fruits and nuts. The man Cornwallis gave name to our local Pudding Ridge, not one of our patriots.

A fascinating story surrounds pound cake. Two brothers, Confederate deserters, were captured and sentenced to die. A day before the hanging, their sister, Grace, delivered the boys a large pound cake, no doubt a loving gesture to serve as their last meal. Surprisingly, hacksaws and files had been baked into the cake — and those boys escaped, living to tell about it.

Women back in those days made simple meals like stews and bread. To feed their families, they used foods available to them. Local, natural foods were grown — harvested, pulped and dried — as a more organic way of preparing meals. Pure ingredients were used, and seasonings were added.

Following the Civil War, women left pots of soup for returning weary and hungry soldiers making their way back home in time for spring planting. These and many more stories are examples of how local cooks came through in times of dire need for their neighbors and strangers. That is Southern hospitality at its best.

Of hospitality, I recently attended Marcia’s new book release, where she served a few of her heritage recipes that record measurements, such as a half-pound of butter. On Marcia’s website is an excellent quote by Barbara Tuchman that reads, “I am a disciple of the ounce because I mistrust history in gallon jugs.” History is about small measures and increments of time — the details. Studying history is much like eating — you want to take one small bite at a time.

History’s not just facts and stories, but also research — a tool to reveal truths. My favorite history book is my Bible. The Bible encourages us first to learn and then live, not the other way around. To walk in the light, life, and love of the Lord is at the heart of wisdom. There are no silent witnesses to history found here. Instead, you will find a full accounting of eyewitnesses to history — the life and miracles of Jesus. God’s word gives us a historical perspective from which to understand the significance of being a recipient of spiritual blessings.

Ephesians 1:3 reads, “Praise be to the God and Father of our Lord Jesus Christ, who has blessed us in the heavenly realms with every spiritual blessing in Christ.”

Sometimes an old recipe is missing some measurements — we have to guess what comes next. But when reading the Bible, deeper study helps us understand any gaps that prevent us from accurately understanding God’s word. There’s no guesswork involved.

The Holy Spirit leads us into truth — by way of history.

Preheat oven to 350 degrees. Beat eggs by vigorously whisking or fast speed on mixer for 1 minute. Reduce speed to mix in butter, buttermilk, molasses, marmalade, dried fruits, nuts and dried bread crumbs. Mix until blended, at least 2 minutes. Meanwhile, whisk flour with spices until blended and light. Stir into wet mixture until just blended. Ladle into large bundt or pound cake pan greased with butter. Setting pan in larger pan with 2 inches of water or putting water pan on rack below will give it steamed moist aspect. Bake for 2 hours, checking for doneness at 70 minutes and every 10 minutes after that, as ovens differ. At that point, brew yourself a cup of hot Earl Grey Tea to enjoy when taste testing. Good served warm with whipped cream, but after a few days of sitting, favors improve, so best made several days before serving.

Marcia curated her version from a traditional British Christmas dessert using dried fruits or pudding, as the Brits referred to desserts. Marcia’s British heritage — her dad was Canadian — was tempered by an American convenience from her Southern mom, who preferred baking instead of a two-hour-long steam bath. Every cook made a signature dish differently and historically used what they had on hand — like dried bread, dried fruits from summer, and available spices. They had to grind their spices which gave it a more intense flavor. The Brits often pour rum over it and light it on fire. Brits always have cream or milk in their cup of tea — the milk was poured in the cup first by the poorer common person to prevent breaking their cheaper china with hot tea, whereas the upper crust with nice bone china showed off by adding their milk after tea was poured. Figgy pudding is excellent with a hot cup of tea.

Let butter soften and pulp thaw (if frozen) overnight. Preheat oven to 350 degrees. Grease a 9 x 13 pan or dish. Do the following by hand. Mix brown sugar into pulp until blended. Then blend in butter. Sift or whisk together the flour, cornstarch, baking soda and baking powder. Stir the dry ingredients into the pulp until mixed. Add eggs and vanilla flavoring and stir in till mixed. Add milk gradually, more or less, until creamy and thickness desired. Type of persimmon used may need more or less. Spoon the mixture into pan to make a soft crust and with a gentle touch, smooth over top. Sprinkle top lightly with white sugar if desired. Bake about 30 minutes on middle rack or until edges leave sides and a toothpick inserted comes out clean. Let cool before cutting into squares. (From Marcia’s grandmother, Mae McClamrock’s recipe collection.)

• 3 tsp. vanilla extract or other combo of flavorings

Begin with all at room temperature. Grease all insides of pound cake pan with butter. Cream butter, shortening and sugar. Add vanilla. Add eggs one at a time, beating well after each one. Add flour and milk alternately and blend until mixed and smooth. Put evenly in prepared pan. Place in cold oven and turn on to 325 degrees. Bake (resisting the urge to open the door and check on it) for 70-90 minutes until tester comes out clean. Do not overbake. Let cool and turn out. (From Marcia’s grandmother, Mae McClamrock’s recipe collection.)

• Juice and grated peel of large orange or lemon

Whisk together dry ingredients well. Combine the molasses, butter, and brown sugar in a saucepan over medium heat, constantly stirring, until all have melted and mixture is smooth.

Remove from heat and pour into glass spouted bowl. Beat eggs vigorously if by hand or with whisk attachment until thick and light yellow in color, 3-5 minutes. Gradually pour and incorporate warm mixture in a steady stream. Add flour mixture gradually while incorporating. Stir in citrus until just blended. Put in a 9 x 9 pan and bake at 350 degrees about 25 minutes or until tester comes out clean. (First printed in historic Mrs. Leslie’s Directions for Cooker in its Various Branches by Eliza Leslie, 1840.)

Marcia made this gingerbread for her history students so they could sample how bland medieval food is enhanced by flavoring it with freshly ground ginger and other imported, exotic spices. It’s similar to Moravian gingerbread. Up to this time, pearlash was used for rising, but modern versions use baking soda. Molasses was still being used as white sugar was a luxury.

In a mixer bowl, beat egg. Add sugar and mix well. Beat in butter and mix well. Beat in flour and baking powder while alternating with milk. Mix well. Pour into a glass pie dish. Add fresh fruits to center of the mixture. Bake in a 400-degree oven for 25 minutes or until done. Makes own pie crust as it bakes. Serve with toppings of your choice.

In a mixer bowl, beat egg whites until white peaks form. Add cream of tartar, and pinch of salt. Continue to beat until stiff. Gradually beat in sifted sugar. Beat well. Fold in pecans and vanilla. Pour meringue into a buttered 9-inch pie plate and form into a nest-like shell, building the sides ½-inch above edge of plate. Bake in a preheated 300-degree oven for 50-55 minutes. Completely cool. In a saucepan, melt chocolate with coffee over low heat, and stir until smooth. Completely cool chocolate and stir in vanilla. In a mixer, whip heavy cream until stiff. Fold the cream into the cooled melted chocolate mixture. Turn into pie shell. Chill for at least 2 hours.

In a bowl, combine flour, salt and pepper. Dredge meat in the seasoned flour. Reserve leftover flour. In a skillet, heat cooking fat. Brown meat and pour off drippings. Pour in ¼ cup water and add onions. Tightly cover and slowly cook 2½ hours. After cooking, dissolve bouillon cube in 1/3 cup of very hot water. Pour bouillon into the skillet. Add squash and apples to meat. Tightly cover again and cook additional 35 minutes or until meat and vegetables are tender. Remove meat and vegetables to a warmed platter. Stir reserved flour into the cooking liquid and cook to thicken. Add water as necessary for desired consistency. 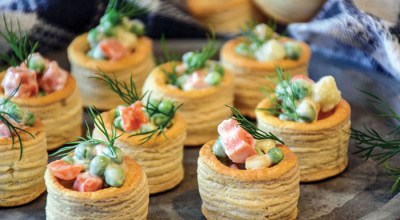 Bless Your Spoon: Heat up those leftovers 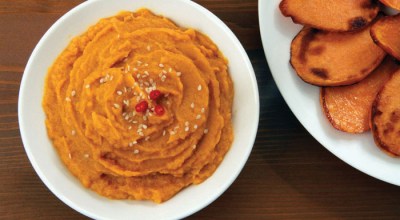 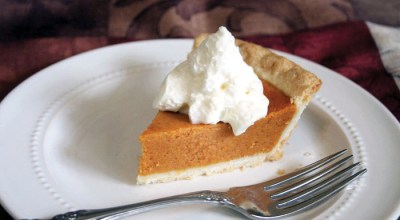 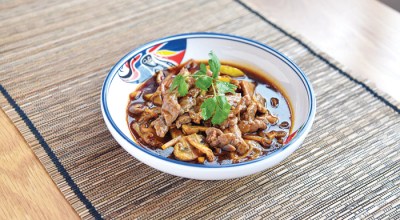