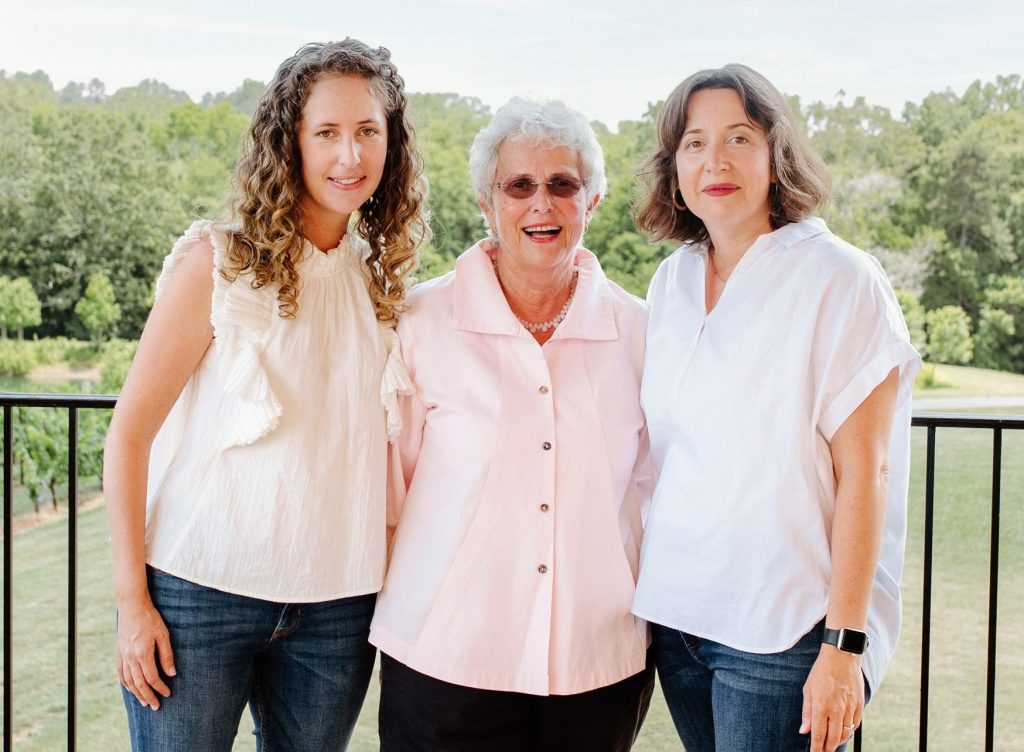 Rachel Johnson was born and raised in the Lewisville area. The youngest of two daughters, Johnson loved living on 40 acres in Lewisville in what is now known as the Tuscany neighborhood. “I grew up with horses and loved every bit of farm life. We were always encouraged to be outside, and I developed a real passion for the outdoors. In our free time, we would be outside playing with friends from the surrounding neighborhood if we weren’t at school or involved in an extracurricular activity like softball or field hockey,” Johnson said. “I attended Summit School from kindergarten through ninth grade before graduating from Forsyth Country Day School for high school.”

An impactful part of Johnson’s childhood was also traveling as a family. “Through my dad’s job, he traveled frequently, and we would accompany him as much as possible. Those trips and memories are something that were very special to me,” Johnson said. “Especially the summers we spent out in Wyoming.”

Johnson’s parents, Joe and Joyce Neely, had taken a trip to Napa Valley in California that would greatly impact their family. They were inspired to create wines locally similar to what was being done out west. “Before prohibition, North Carolina was the No. 1 producer of wine in the country. After prohibition, people pulled up their vines and stopped growing grapes. My parents wanted to revitalize that industry, so they tried to plant vines on our property in Lewisville. Unfortunately, there was too much red clay. They started to look for property that would be conducive farmland and also convenient for people to get to,” Johnson said.
Thus, Johnson’s parents sold their 40-acre farm and purchased 138 acres in the Yadkin Valley to begin their vineyard and winery known as RayLen Vineyards and Winery. The vineyard and winery that features 35,000 European varietal grapevines acquired its name as a combination of the Neely’s two daughters, Rachel and Helen.
“During that time when they started RayLen Vineyards and Winery, I was in school at Emory University in Atlanta. I didn’t think at that time I would come back and work there. I had decided to major in business, and was interested in doing something in banking,” Johnson said. “I also met my future husband, Mark, in my first year at Emory, and we started dating seriously.”

After Mark and Rachel graduated, they were married at RayLen Vineyards and Winery. “It was such a beautiful setting and meaningful. They were still building the pavilion at that time,” Johnson said. As the Johnsons began their next chapter, Rachel was offered a position at Wachovia Bank in Charlotte. “I knew pretty quickly after starting my job that I wanted to go back to school to get my master of business administration at UNC’s Kenan-Flagler Business School,” Johnson said. “Mark was going to law school at UNC, so I knew it was now or never.”

Johnson graduated from her program at UNC first and went back to banking. “When I graduated Wachovia Bank didn’t exist anymore. I went to work for Bank of America for a team that documented and improved the change management system. I spent a lot of my time working in governance rule with a slant towards the operational path,” Johnson said. “The bank was flexible with letting me work remotely too when Mark graduated from law school and got a job in Winston-Salem. I would work from home four days a week and then come back to Charlotte one day. I was able to work even when we had our daughter Maddie (9) because of their flexibility.”

Johnson stayed at the bank until Maddie was 3½ years old.
“We moved to Raleigh for Mark’s job, and at that time it wasn’t going to be possible to continue commuting to Charlotte. We were there for four and a half years before moving back to this area,” Johnson said.

With Johnson’s daughter getting older, and establishing roots back in her hometown, she began to consider going back to work. “I really believed in RayLen Vineyards and Winery. I saw the demand for it and the unique niche my parents had created to make a true North Carolina product. To grow the grapes and make the wine is what sets us apart. Most places either do one or the other. From start to finish, the process is controlled in house. I was drawn to the idea of being able to be a farmer essentially. There is a lot of chemistry involved, manufacturing, marketing and sales. I wanted to help wear all of those hats,” Johnson said.
When Johnson’s father, Joe, passed away from cancer a year and a half ago, she and her sister, Helen took over full time. “When my dad passed away it was really hard. The end was not long, which is harder on the people left behind. He built a tremendous small business with my mom, and both my sister and I were passionate about continuing to see it succeed to bring great local vintages to our friends and community members that have supported us along the way. What we really are energized by is the community support we have felt. Seeing regulars and spending time with them, having events at the property which include helping local charities, and continuing to grow the best grapes and wines is important to us,” Johnson said. “I am especially grateful I am able to do something that allows us to give back to our community in so many ways.”