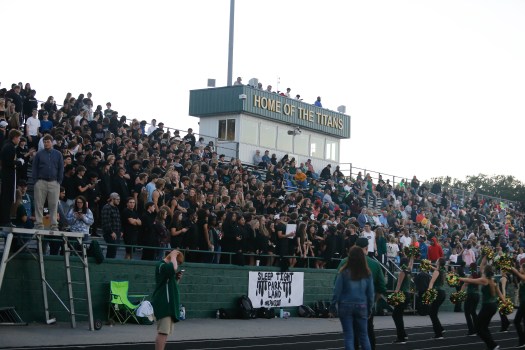 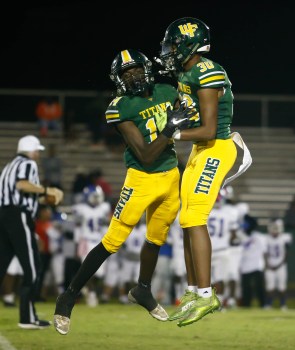 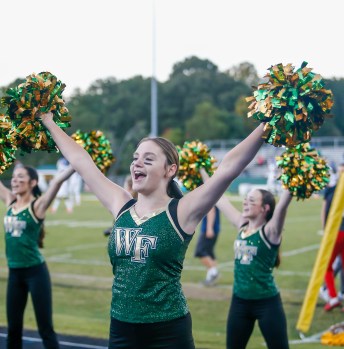 Even though it was just one win, you could almost feel the pressure released from the West Forsyth football team Friday night after it coasted to a 58-0 win against Parkland at Jerry Peoples Stadium.
And in doing so, the Titans, who came into the game with an 0-4 record overall and 0-1 in the Central Piedmont 4-A, won in such dominating fashion that there was a running clock in the second half after building a 52-0 lead at halftime.
“It’s better than the alternative,” Coach Adrian Snow of West Forsyth said. “I told our kids I was proud of them. We’ve been through a lot. The expectations at West Forsyth are always the same. And I felt like our kids came out and performed well.”
The Titans finished with 418 total yards, including 257 rushing and held the Mustangs (0-5, 0-2) with 43 total yards.
“Coach (Derek Bryant of Parkland) is doing a great job. He’s fighting, man. And he’s a great dude,” Snow said.
Running back Caman Chaplin led the Titans with 132 yards rushing on 11 carries and added two touchdowns.
“Everyone is enjoying it. If you can hear it, it’s amazing,” Chaplin said.
“We worked hard. We truly had to work hard in practice. It’s been a (heck) of a run for us. We’ve just been trying to do our best every single day, trying to win every single day. Every single loss, we’ve just been working harder and harder every single time.”
It didn’t take long for West Forsyth to take charge. It took the opening kickoff and went 56 yards in 10 plays and scored on a 2-yard pass from quarterback Bert Rice to Kian Bailey with 7:22 left in the first quarter. Chaplin tacked on a run for two points to make it 8-0.
“It’s been pretty rough,” Chaplin said of the season. “With our first game going to A.C. Reynolds, that was the (toughest) game I have ever played. It felt like we just couldn’t do anything. But over time we have gotten better. We should’ve beaten Oak Grove, Weddington and Mount Tabor, but even though we lost it made us better and it allowed us to do what we did (this past Friday night).”
On the ensuing possession, punter Francisco Rojas of Parkland kicked it 6 yards, which gave West Forsyth the ball on the Parkland 28. Bailey scored one play later on a 28-yard run and Alejandro Morillon tacked on the kick for extra point with 6:15 left in the first quarter to extend the lead to 15-0.
Chaplin scored again on the next possession on a 25-yard run with 4:27 left in the first quarter to help push the lead to 22-0.
“With the way that we’ve been working, we’ve done what we needed to,” Chaplin said. “We’ve earned this in my opinion. We’ve done what we needed to. This is just what we should do every single time.”
West Forsyth just kept pouring it on. Jordan Stephens caught a 20-yard touchdown pass from Rice with 10:55 left to help extend the lead to 29-0 with 10:55 left in the first half.
The same tandem accounted for the next touchdown after Stephens caught a 28-yard pass with 8:21 left in the second quarter to help make it 36-0.
“We do have a good football team,” Snow said. “The problem is, the people we’ve been playing are good, too. So, the last game before (this past Friday), the four teams we’ve played were 16-2. And the two teams they lost to were unbelievable. So, our kids, we came out and played well, performed well.
“I didn’t want it to be an ugly win. I just wanted it to be a good win. I wanted us to play clean, do the little things, and I thought we did that.”
Rice threw another touchdown pass, this time to Gabe Akpen with 4:38 left in the second quarter to help make it 43-0.
Rice finished 9-of-10 passing for 161 yards, four touchdowns and no interceptions.
“He had some good throws,” Snow said. “I don’t think we had a drop in the first half, which was awesome. But it was good for our kids. We’ve gone through a lot.”
West Forsyth scored again after Will Hayes blocked a punt that bounced out of the end zone for a safety with 2:50 left in the second quarter to make it 45-0.
Akpen added a 5-yard run with 38 seconds left in the second quarter to help extend the lead to 52-0.
“I think the biggest thing is, we talked about us a lot,” Snow said. “We talked about what they (Parkland) did and what kind of schemes and what-not, but ultimately, we were trying to get West Forsyth better. And that’s what we did. It was about us.”