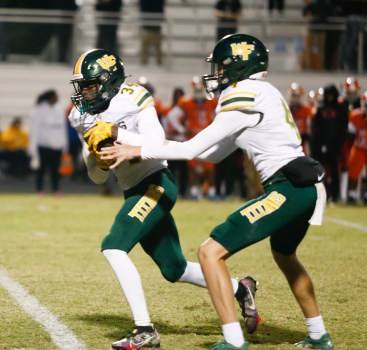 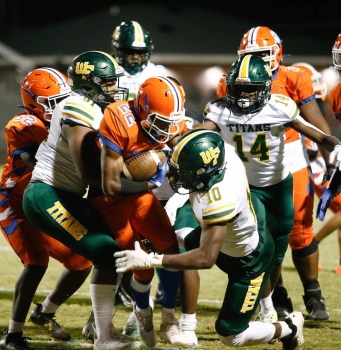 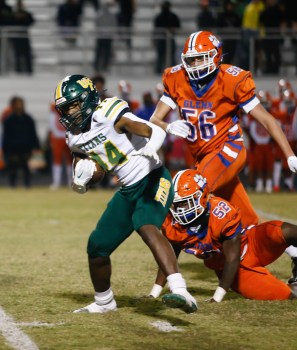 Brad Richard photo Davion Eldridge comes up with one of three interceptions for West Forsyth last week in the win against Glenn. His brother, Davian, also had an interception return for a touchdown earlier in the game.

KERNERSVILLE — It may have been a rare Thursday night high school football game because of Hurricane Ian, but West Forsyth was able to get the same result as last week.
Running back Caman Chaplin rushed for 156 yards on 26 carries and scored two touchdowns as West Forsyth fended off a late rally by Glenn to win 28-21 in a Central Piedmont 4-A game at Marty Stanley Stadium.
The Titans (2-4, 2-1) have now won two straight games, including last week’s 58-0 win against Parkland at Jerry Peoples Stadium in Clemmons.
The Titans led 14-7 at halftime and immediately took control in the second half. They took the opening kickoff of the third quarter and Chaplin rushed for 45 yards on the first play, and on the second play, he darted in for a touchdown for 20 yards with 11:35 left in the quarter to help extend the lead to 21-7.
“Sometimes he just makes something happen,” Coach Adrian Snow of West Forsyth said. “I’m proud of him. He works extremely hard. And he’s not a big talker. He’s just a doer, which I like. That’s fun to be around.”
The Bobcats (2-4, 1-2) went three-and-out on the ensuing possession, and the Titans took over at the Glenn 49 with 9:37 left in the third quarter. Chaplin scored on the first play on a 49-yard run with 9:23 left to help extend the lead to 28-7.
“We had to keep working,” Chaplin said. “The plan was for me to keep bouncing it out, juking and scoring. That’s what we — we had to keep focused and make sure the offensive line would be able to hold them off long enough for me to be able to do what I do best.”
Coach Antwon Stevenson of Glenn knew his team had dug itself a hole.
“We start the second half, and we give a (109) yards in three plays,” Stevenson said. “…We can’t give up that. We can’t allow those runs like that.”
After going scoreless in the third quarter, Glenn came back in the fourth quarter. It took possession at its own 13-yard-line with 2:10 left in the third quarter and went on a 17-play drive, and running Brandon Sutton scored on a 1-yard run with 9:47 left in the fourth quarter to help slice the lead to 28-14.
“The kids just continued to play,” Stevenson said. “I applaud that.”
Any chance Glenn had of coming back looked like it was erased after Sean Davis of West Forsyth intercepted quarterback Jerrell Crawford — his third of the game — at the 11 and Davis ran it back to the 25 with 2:16 left in the game. Sophomore Justin Ferguson also intercepted Crawford during the game.

Trying to run some clock, on their first play after Davis’ interception, the Titans fumbled and the Bobcats recovered it on the Titans’ 18-yard line with 2:11 left.
Glenn capitalized three plays later after AJ Coverdale caught a 20-yard touchdown pass from Crawford with 1:27 left to help make it 28-21.
Following the touchdown by Coverdale, Glenn attempted an onside kick, but West Forsyth recovered it on the Glenn 49 with 1:25 left. Two plays later, Chaplin sealed the win with a 20-yard run.
“We got the first down,” Snow said. “That was a big deal because if you don’t get the first down that becomes a problem. Caman had a big run there and it was nice.”
West Forsyth took the early lead after Daviare Eldridge intercepted Crawford and ran it back 18 yards for a touchdown with 7:17 left in the first quarter to take a 7-0 lead.

The Titans added to the lead after Gabe Akpen caught a 9-yard touchdown pass from Rice with 1:26 left to go in the first quarter to extend the lead to 14-0.
“it’s my job to have the kids mentally ready, and they weren’t mentally ready,” Stevenson said. “…I’ve got to have the kids ready. They weren’t ready to play the beginning of the game.”
The Bobcats chipped into the lead 4:30 left in the second quarter after Coverdale caught a 4-yard touchdown pass from Sutton to help make it 14-7.
After two straight wins, West Forsyth will travel to Reagan (4-2, 2-1) next week.
“I was proud of our kids,” Snow said. “We made it interesting there at the end, but it’s one of those things. I told them, you’ve always got to enjoy winning. And we kind of struggled in the beginning (of the season). It kinds of makes it sweeter.”