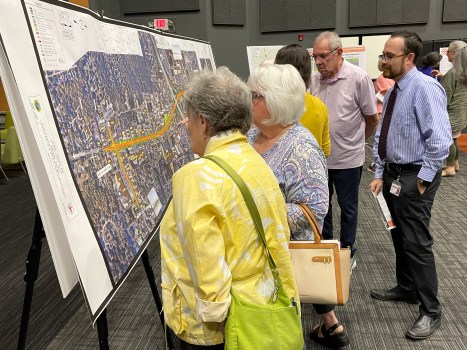 Jim Buice photo Mike Tingle (right), the former chairman of the Clemmons Transportation Committee, was among the first to arrive for the NCDOT public meeting at River Oaks Community Church. 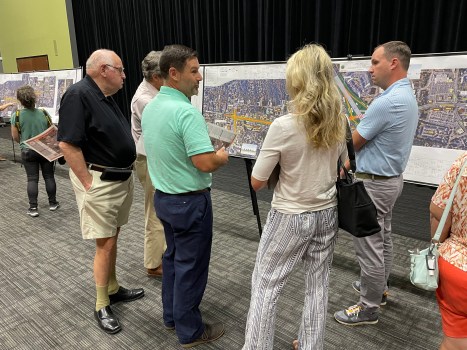 Jim Buice photo Residents check out the maps and discuss the Lewisville-Clemmons Road improvements project at the NCDOT meeting. 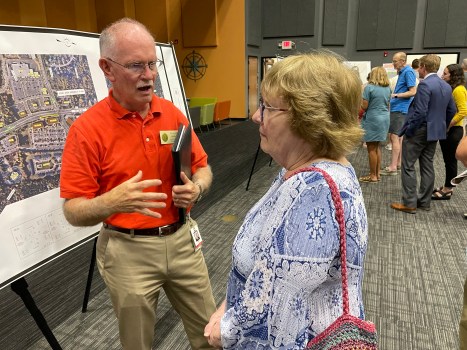 What’s the latest with Lewisville-Clemmons Road improvements these days?
Well, after a lengthy NCDOT delay because of funding availability, Project U-6004, which is better known for proposed improvements on the busy stretch of Lewisville-Clemmons Road — including the I-40 interchange to U.S. 158 — is back on the drawing board.
In fact, there was a public meeting held on Sept. 22 at River Oaks Community Church to give residents an opportunity to look at maps and other information along with asking questions to representatives from NCDOT and project manager Kimley-Horn on the proposed design.
“It’s a committed project, on the schedule and ready to go,” said Pat Ivey, District 9 engineer for NCDOT. “Basically, we had some initial comments from the council and the public, and we’ve made some modifications to some things. The whole purpose tonight is to let everybody take a look at it, give us some comments and some feedback, and then we’ll make a decision on which action we want to go with. Then we’ll get into final design.”
Ivey said that the proposed design includes two alternatives for the bridge over I-40 — one for actually widening the bridge to make a standard size sidewalk and the other being building a parallel pedestrian bridge on the east side of the interstate.
Then there are a couple of options on navigating the entrance at the Westwood Village shopping center and the intersection at Stadium Drive, including possibly taking the McDonald’s property to make more room to create safer movements.
In addition, Ivey said that the proposal “actually ended up adding a little more median than we anticipated going beyond Stadium Drive because of some of the congestion issues” and then putting in a U-turn movement while heading south near Wells Fargo with a left-turn lane for traffic to go back to the north.
Mike Tingle, who was chairman of the Clemmons Transportation Committee several years ago, was one of the first to arrive at River Oaks for the recent public meeting.
“All these plans, they’re all safety plans,” Tingle said. “It’s such a hot debate right now because everyone wants to focus on the business aspect or the safety aspect, and the DOT is doing the best job they can. It’s a tough balance, and they have some very interesting ideas out there. I’m very curious to hear the feedback from a lot of individuals in that room.”
Tingle hopes a new and improved design might mean he won’t have as much use for his first-aid kit going forward.
“I’ve been either the first Good Samaritan or the second Good Samaritan on the scene of three different incidents,” he said of his experiences navigating the dangerous road. “The last one I was getting a coffee in the Clutch Coffee Bar and trying to leave and someone getting T-boned right there.”
As stated in the fact sheet, the primary purpose of this project is to address safety issues for drivers and pedestrians along Lewisville-Clemmons Road by improving traffic flow and reducing traffic delays, particularly through the I-40 interchange. Preliminary designs presented at the meeting included comments last received in 2018.
That was when the Clemmons Village Council, in September of that year — with a mayor and three council members that were elected largely on a “no median” platform — approved allocating Transportation Advisory Committee points to the project, stating a need for a safer road and hoping for more in-depth research into the design and implementation with local input.
NCDOT recommended that a median be placed from I-40 to Stadium Drive, which was only 20 percent of the entire corridor. Ivey said at the time that all the preliminary findings showed the shorter median for the busiest stretch of the road to be the best option.
About a year later, Clemmons learned that all pre construction activities for NCDOT, including Lewisville-Clemmons Road, had been put on hold until further notice.
In January 2021, Clemmons got some good news when town officials found out in a Transportation Advisory Committee meeting that while many current and pending projects were still being delayed, that wasn’t the case with the corridor project on Lewisville-Clemmons Road.
Then in May 2022, council member Mike Combest, who is the TAC representative for Clemmons, informed the board that the project was “proceeding on pace” with a price tag of over $40 million.
The NCDOT breakdown for costs includes $24.9 million for construction and $15.4 million for property acquisition. The preliminary timetable dates calls for right-of-way acquisition in December 2023, starting construction in 2025 and completing construction in 2028
Clemmons council members and staff were well represented at the public meeting.
Village Manager Mike Gunnell said he was “just looking at the plan. We met with them prior to this meeting for a first look for council and staff. As far as I know, we didn’t get any input as far as the design. It’s all based on them consulting it out to a firm that did the traffic analysis and the study. That’s their job.
“Of course, we expressed our concerns about Middlebrook (Drive) and 158, which they do show some improvements on this with the intersection, but the question is if it’s enough to handle the traffic from what’s being proposed with Riverwalk (a proposed new development in the county with more than 500 homes where traffic will flow into Clemmons).”
Ivey said that the proposal of adding a double left turn from Lewisville-Clemmons Road onto U.S. 158 and another lane up to Spangenberg Avenue will be a big help with traffic flow.
Those in attendance at the meeting were able to submit written comments on the project, and that window remains available for 30 days — up until Oct. 22 — via email to Connie James, NCDOT project engineer, at ckjames1@ncdot.gov.