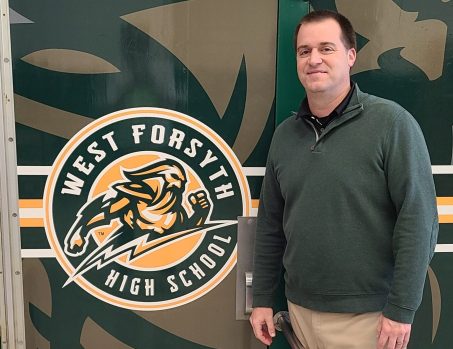 The rich tradition of athletic excellence at West Forsyth that spans almost 60 years will finally have a permanent place to honor and celebrate former student-athletes and coaches for their achievements and contributions to the sports programs at the school.

Principal Kevin Spainhour and Athletics Director Mike Pennington have revealed plans for the West Forsyth Sports Hall of Fame and the wheels are already in motion to induct an inaugural class in the fall of 2023.

The nominating window is now open on the school’s website through Jan. 31, 2023. Visit the page, which also includes eligibility information, with this link: https://www.wsfcs.k12.nc.us/domain/14610

NBA superstar Chris Paul, who graduated from West in 2003, became the first member of the inaugural class of inductees when Spainhour and Pennington announced the news during the ceremony to name the basketball court in Simpson Gymnasium after Paul in a ceremony Sept. 1.

“We’re not going to put a limit on the number of people who get in the first group of inductees because we have so much history,” Spainhour said. “It will be a fun process and something the school will definitely enjoy, and also something the community can really enjoy. We want to celebrate those folks who have done great things from years ago. And from my point of view, if you have been successful in the athletic world, then chances are that their outreach and their significance and influence throughout their life has also continued. To celebrate them now as adults is something that our school and students and this community can reach in and get behind and be excited about.”

Pennington said that talks about a potential Hall of Fame have materialized over the years and were discussed with Charles McAninch, the school’s principal prior to Spainhour taking over in March 2020.

“We probably would have been able to jump on it a few years ago and then COVID hit,” Pennington said. “I think this is the perfect time to do it now. We’re piggybacking on the court dedication to Chris (Paul) and him being the first one. We’ve already had a lot of fun speculating about who the first class would include. We have a lot of names to talk about.”

Pennington said the next steps will be to select a nominating committee and to go ahead and get dates planned for the induction ceremony and recognition.
“We’ll probably have a nice dinner for them here at school next fall and pick one of the home football games where they can be recognized,” Pennington said. “We’ve looked at how several other schools are doing their hall of fames and got some great feedback.”

Spainhour said that one such conversation with Ed Weiss, the recently retired principal at Mount Tabor, spurred plenty of ideas.

“I think talking to him really convinced us to have the dinner here at school,” Spainhour said. “Some of these people may not have stepped on campus in 20 or 30 years and it might be fun for them to come back and see all the changes. For them to come back, potentially walking around with their kids and grandkids, I think there is a lot of value in that. There is so much tradition here that we love the idea of bringing them back on this campus.”

The West Forsyth Booster Club will also have an active role in the process, with the president of the club or a designee serving on the selection committee.

“Once someone is nominated for selection, their application will always be considered if they don’t happen to make it in the first year,” Spainhour said. “They will not need to be nominated a second time. They would automatically be considered for every class. After the first class is inducted, we will limit the number of people in each class after that.”

Pennington said that once the nominations have been finalized, the committee will meet early in 2023 and make the final selections. Then they will notify the group that is selected before the end of the 2022-23 school year to give them all enough time to plan for the induction ceremony.

“That will be the cycle every year,” Pennington said. “We’ll take nomination through Jan. 31 every year and keep the same pattern going forward. We know it’s going to be an undertaking and a year-to-year commitment from our boosters, and I know they are willing to help make this happen and do it the way it needs to be done.”

Spainhour said he is thrilled to help get this initiative started and is excited about where it will lead.

“We want to be sure we do this the right way — the West Forsyth Way,” he said. “It’s well past the time to get this going and we’re excited about what it will become.”