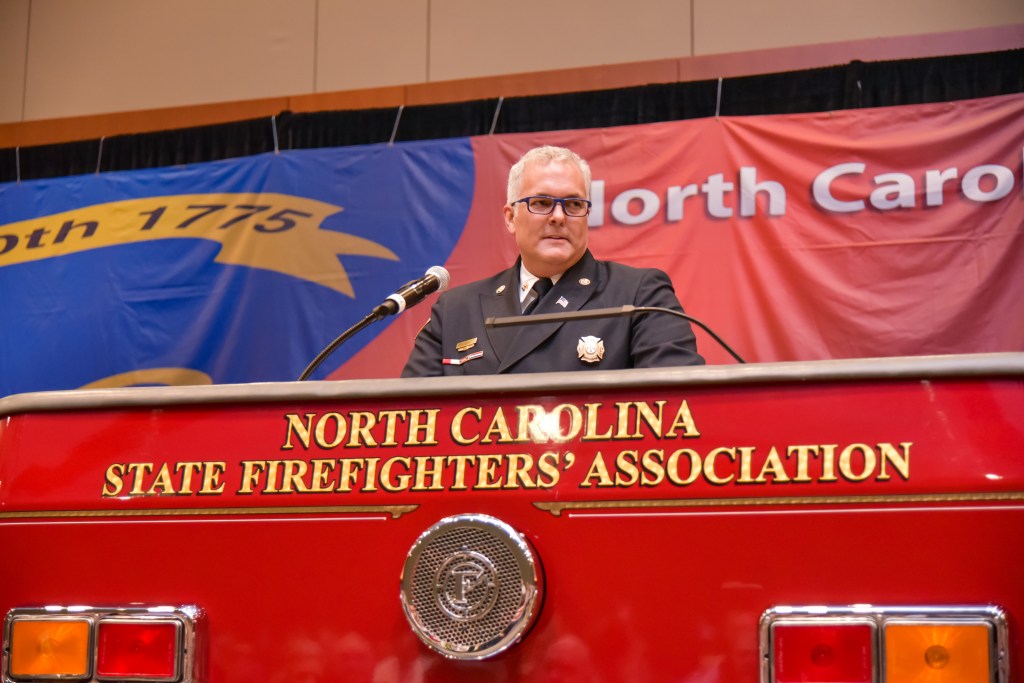 Davis, Assistant Chief of the Clemmons Fire Department, will serve a one-year term

Chris Davis didn’t always want to be a firefighter. He always envisioned himself working on his family farm in Clemmons until it was sold in 1989.
And now, after a nearly 40-year career in firefighting, Davis has been installed as the president of the North Carolina State Firefighter’s Association at the organization’s conference in Raleigh in August.
Davis joins Clemmons Fire Chief Jerry Brooks in the role. Brooks was installed as the president of the association in 1989.
“I think it is pretty remarkable that two people from the same small-town, rural fire department have served as the president of this organization,” Davis said. “Chief Brooks has been a great mentor to me. I think someone told me that I’m now the 96th person to hold this position in the state. That’s pretty neat. And very humbling.”
The NCSFA was established in 1887 and currently has more than 56,000 members that Davis now represents.
“We just got cancer insurance passed during the last state legislature and that will remain our No. 1 priority this year,” Davis said. “But we’ll continue to find issues that we can push out and find support for. We also provide plenty of benefits and services for firefighters and their families and award $262,000 worth of scholarships every year. It’s a daunting task and a responsibility that I’ll take very seriously.”
Davis began his journey into firefighting in the summer of 1983 when he became an Explorer through the Boy Scouts of America and a junior firefighter in Clemmons. That role led to him being a volunteer firefighter and ultimately a full-time position in Clemmons in 1988. In 1991, he went to work for the Forsyth County Fire Department until he retired in 2018 as assistant chief over the Fire Suppression Division.
He has remained as a volunteer firefighter with Clemmons since his retirement in addition to his responsibilities as assistant chief. He also works for the North Carolina Office of the State Fire Marshal.
“When I first started with the Explorer program, it was really just a way to be able to hang around with my friends,” Davis said. “I always thought I would end up working on my family farm. Then my parents sold it in 1989 and I had to figure out what I wanted to do. By that time, I enjoyed being a volunteer firefighter and thought that might be something I needed to pursue. I figured that with as much time as I had put into it at that point, hopefully they could find something more for me to do. Helping people and serving the community is what is most important and I’m thankful that I’ve had a chance to do that in my career.”