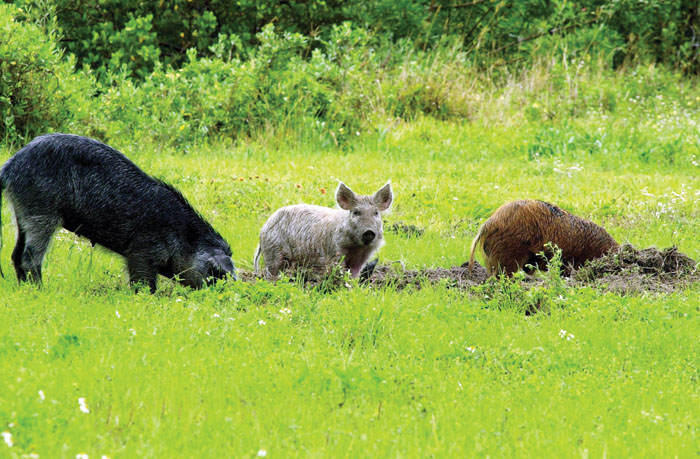 Courtesy NC Wildlife Resources Commission Invasive feral swine have been called the “rototillers” of nature. Their longs snouts and tusks allow them to rip and root their way across America in search of food. Unfortunately, the path they leave behind impacts ranchers, farmers, land managers, conservationists, and suburbanites alike.

Landowners in five North Carolina counties — four in the Piedmont — can obtain tools to help remove invasive feral swine as part of a pilot program through the N.C. Department of Agriculture and Consumer Services.

The 5-County Trap Loan Program will be available in Anson, Davie, Haywood, Montgomery and Randolph counties. It provides high-tech corral traps that can be borrowed for up to a month by landowners who have feral swine problems. The traps will be available through August 2023.

The traps include a remote trigger system that allows operators to monitor traps on their smartphones and close the gate remotely when a group of pigs is inside.

Information about feral swine in North Carolina and applications for the trap loan program are available at ncferalswine.org.

“Because they reproduce so quickly, protecting the land from feral swine isn’t really about how many you can remove, but rather how many you miss and are left to multiply,” said Falyn Owens, a member of the N.C. Feral Swine Task Force from the N.C. Wildlife Resources Commission. “True success requires removing the entire group of pigs, which is exactly what these traps are designed to do.”

Feral pigs can do plenty of damage to farms and wildlife habitat through rooting and competition for food. According to the commission, they can be found all across the state. They are a blend of Eurasian wild boar and domestic pigs, and they can produce multiple litters per year of a dozen piglets each.

Sport hunting has had little effect on feral swine populations, which are on the increase across North Carolina.

North Carolina fishermen are again being asked to give up something to help the N.C. Division of Marine Fisheries react to bad news about one of the state’s most-popular fisheries.

The DMF announced in late September that it wasn’t going to the fall recreational season for striped bass in the Albemarle Sound Management Area — because their original harvest numbers were off.

DMF reviewed its 2021 stock assessment and decided that too many fish had been caught last year, so it was forced to reduce this year’s allowable catch — and that move eliminated the recreational season in the Albemarle Sound and Roanoke River management areas.

A 2021 stock review shows that stripers are declining because of poor reproduction over the past handful of years after the fishery was one of North Carolina’s real shining lights in the early 2000s — when catches during the spring spawning run in the river often produced 100-fish days for anglers. DMF said stripers are being overfished.

DMF said because so many stripers were caught in 2021, the Total Allowable Landings for stripers in 2022 was changed to 15,726 pounds, equally divided between recreational and commercial fishermen. DMF surveys indicate that about 35,000 pounds have already been harvested in 2002, so there will be no fall season.

Another bass fisherman from North Carolina will compete in the 2023 Bassmaster Classic.

Monetti caught 8 pounds, 13 ounces, to defeat Seth Slanker of Florida Gateway College, who came up with 7-11.

Monetti will fish with some of the world’s best pro fishermen in the Classic, which is scheduled for March 24-26 on the Tennessee River out of Knoxville. Three North Carolina bass pros have already qualified through the Bassmaster Elite Series: Matt Arey of Shelby, Brandon Card of Salisbury and Shane LeHew of Catawba

Monetti will receive paid entry fees into nine Bassmaster Opens in 2023, along with the use of a fully rigged pickup truck and bass boat.