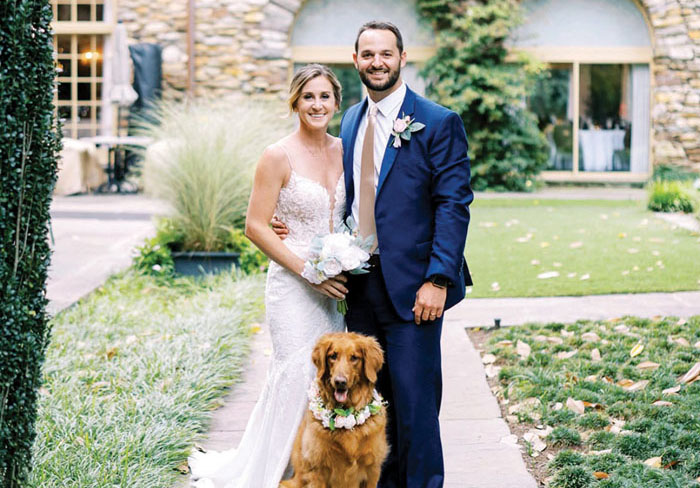 Alison Menzies McCann, her husband, Jacob and their pup, Ruby

Alison Menzies McCann, PA-C, was born in Canada before moving to the Winston-Salem area for her father’s job. “As a child, my parents encouraged my brother and me to try new things from sports to the arts,” McCann said. “I really took to gymnastics; however, I realized that injuries in middle school just made me want to shift gears despite enjoying it tremendously.”

Like many former gymnasts and trampolinists, McCann would find out that she was a natural fit to get into diving. “I had gotten word about a diving club in Greensboro from a teacher and head swimming coach at Reagan High School, Ryan Michel,” McCann said. “He gave me the information about where people start to train in Greensboro, and how to get in touch with them. I started the program the summer before my ninth grade year. I enjoyed it so much; Coach Michel encouraged and connected me with a club program in Chapel Hill at the university. I began traveling back and forth to participate twice a week on their team.”

During McCann’s commuting to her diving club team, she would get her homework completed. “The club diving team practiced year-round, and in the summers, I would practice twice a day,” McCann said.

McCann’s dedication took the three-time state champion to diving camps in Michigan. “When I was a sophomore in high school, I went up to Michigan State University. That was my first of several times participating in their diving camps with Coach Eric Best. He was fantastic, and I got to know him well,” McCann said. Never shying from a challenge, McCann decided to head to the Big 10 school, and joined the diving team.

“It was intimidating at first being at a school with 40,000 people, and you grow very quickly. I felt fortunate to have a built-in friend group with my dive team, and other athletes. I did get homesick though because I had always been close to my family. I focused on my schoolwork and bettering myself as a diver. It was really cool to be surrounded by such high-caliber divers,” McCann said. The four-year collegiate athlete didn’t shy away from her academic pursuits. “My first two years, I was a chemical engineer. Bless those people, they are geniuses,” McCann said with a laugh. “I realized I was not going to flourish in that subject. I had always thought about doing something medical. I switched to a degree focused in biomedical lab science. My mom was a lab tech, so I had a built-in tutor and influence in that area.”

After thriving at Michigan State University, McCann came back to the Winston-Salem area with her degree in biomedical lab science and four years of diving experience. “At that point, I took a gap year. I had strongly considered medical and physician assistant school. After speaking with my neighbor, I decided to attend physician assistant school to have more of a work/life balance. I was also drawn to not having to declare a specialty,” McCann said. “During my gap year I began applying to PA schools. I also reconnected with Coach Michel. There was still a need for a diving program in the Winston-Salem/Forsyth County Schools. We began one for high schoolers that practiced then at Winston-Salem State University. Any diver that was interested in trying out that attended a high school in Forsyth County was able to have a local program and compete. Throughout my entire time in PA school at Wake Forest University, I would coach twice a week for an hour with the team. We typically have 12 divers on the team. The athletes learn 11 dives, and compete within a two-month period,” McCann said. “Working with Ryan Michel has been such a treat. Diving would not be here today if it was not for him fighting so hard for it. He has grown from being a coach to like family. Anyone who knows Coach Michel knows that he really is invested in his students and athletes. That’s been such a gift for our community.”

McCann has continued to run the diving team after graduating from PA school in May 2018. “We’re practicing over at Wake Forest University now,” McCann said. “They’ve got a great facility and it’s convenient for the divers.”

When McCann isn’t inspiring the diving team, she’s working full time in outpatient cardiology as a physician assistant. “I realized pretty quickly that I loved cardiothoracic surgery. It allowed me to be in surgery about 80% of the time, and in clinic about 20% of the time. I had a great team over at Wake for my first four years and am excited about my position now at Novant in the cardiology outpatient clinic,” McCann said.

McCann has another reason to be excited: she is a recent newlywed, having married Jacob last month. “We met through my best friend in PA school who was working over at Baptist Hospital in the neuro intensive care unit. I reluctantly agreed to go on a blind double date, and it actually worked out,” McCann said with a smile. “He was even brave enough to help renovate our house in Clemmons West together while he was in Certified Registered Nurse Anesthetist (CRNA) school.”

The McCann family and their dog Ruby have enjoyed establishing their roots. “It’s been nice finding a way to come home. My hope is to give back and help others both professionally and in the diving world,” McCann said.