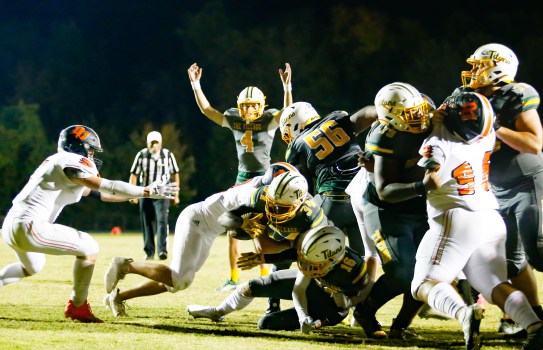 Brad Richard photo Caman Chaplin (34) lunges forward for the game-winning touchdown with 33 seconds left while quarterback Bert Rice (4) signals 'touchdown' in West Forsyth's 34-31 win against Davie County. Chaplin ran for 358 yards and four touchdowns as the Titans picked up a key win in the CPC. 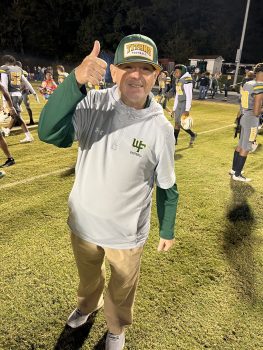 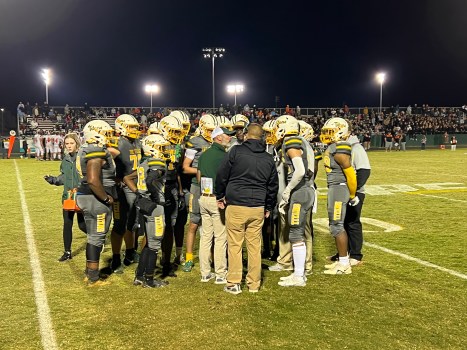 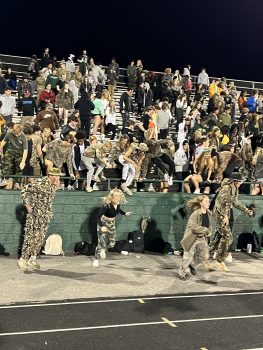 Caman Chaplin rushes for 357 yards and four touchdowns, including the game winner with 33 seconds left as Titans pick up homecoming win

The stars were shining on a crystal-clear Friday night at Jerry Peoples Stadium, but none was brighter than the one on the field named Caman Chaplin.
Chaplin rushed for 357 yards on 38 carries and added four touchdowns, including a 1-yard run with 33 seconds remaining, as West Forsyth slipped past Davie County 34-31.
West Forsyth improved to 3-5 overall and 3-2 in the Central Piedmont 4-A, and Davie County dropped to 2-6 overall and 1-4 in the conference.
“I do what I normally do and break away and score,” he said. “It was a rough game. I knew it was. Davie always plays us hard. But we should dream and we fought all the way to the end. We haven’t played four quarters in any other game, but this time we did play four quarters.
“I think we just huddled together, we were (ticked) off and we were able to come out on top.”
In addition to his 1-yard run, Chaplin had touchdown runs of 82, 71 and 12 yards.
“If I get past the defensive line, it’s pretty much over,” he said. “If you don’t have anybody else, I’m going to score.”
As a 5-foot-11, 165-pound junior, Chaplin is effective in both in short- and long-yardage situations.
“He does a good job of making people miss,” Coach Adrian Snow of the Titans said of Chaplin. “And even when there’s nothing there, he goes. And he can run, too.”
The Titans needed every yard Chaplin gave them.
The Titans led 27-24 after Chaplin scored on a 12-yard run with 4:20 left in the third quarter. However, the War Eagles responded late in the fourth quarter.
Starting at their own 44-yard line with 7:43 left in the fourth quarter, the War Eagles went on a 12-play drive. On the 11th play, which was third down, the Titans were called for a controversial pass interference penalty in the corner of the end zone after an incomplete pass, which would have set up fourth down.
With a fresh set of downs, the War Eagles capitalized on the penalty when Ty Miller scored on a 3-yard run on the next play with 4:49 left to help take a 31-27 lead.
“Obviously, we had to score,” Coach Tim Devericks of Davie County said. “So, punching it in there was big for us.”
As everything unfolded and Davie County took the lead, the West Forsyth offense watched from the sideline, knowing the game was in its control.
West Forsyth took possession at its own 27 with 4:47 left and went on a 14-play drive to churn some of the time off the clock.
“My whole thing was, I had three timeouts,” Snow said. “And I didn’t want to use them. So, the guy on the sideline, he’s a great official, he kept looking at me like I might call one, I said, ‘No, we’re good.’
“Because what I didn’t want to do was give them a lot of time (if West scored). You know, I wanted to make sure we had enough time, but I also didn’t want to give them a lot of time.”
On the game-winning drive, Chaplin had 10 carries.
“One of our assistants said we needed to take him out (for rest),” Snow said. “I said, ‘Nah, he can rest here in a minute. In about 2 minutes we’ll take him out then.’ Because we were kind of churning it out there with him.”
Chaplin was able to punch it in for a 1-yard touchdown with 33 seconds remaining to take a 34-31 lead.
“I had to,” Chaplin said running during the final drive. “I had to. We are a running team. But I did power to the end, and I kept running the ball. It was amazing when I got the touchdown and we won.”
Devericks was also impressed by Chaplin’s performance.
“He’s elusive and he can break tackles,” Devericks said of Chaplin. “Because there were multiple times where we had our hands on him in the backfield, but just couldn’t corral him.”
Davie was left with 33 seconds and one timeout to try and put together a drive for a tying field goal but could only advance to its 33-yard line.
“We were just trying to get it to the outside and get it out-of-bounds, and get another pass and get out-of-bounds, as well,” Devericks said.
On the penultimate play of the game, Miller threw it to Brodie Smith on the Davie sideline. Smith initially caught it, but he was flipped on the tackle and dropped the ball as he came down hard. He was able to get up after being checked by the trainers. On the last play, Miller threw it to Aidan Froelich, but the clock ran out after he was tackled.
Snow was proud of his team for their response on the game-winning drive after the pass interference penalty. He also noted plenty of similarities between his team and Davie.
“Davie and West Forsyth can look in the mirror this year and it’s been tough losses, been close losses,” Snow said. “They’re young, we’re young. I told our kids before the game, I felt it was going to go to mentally whoever wanted it more, not to say that they didn’t.
“I think we may have made a few more plays later, but at the end of the day, we’re mirror images of each other, and hey, we found a way.”