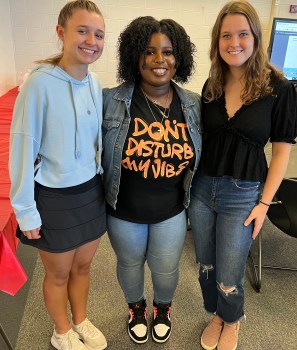 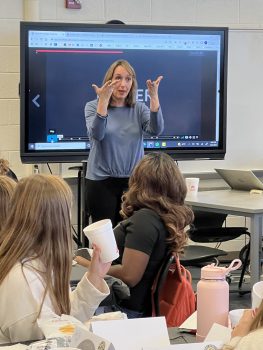 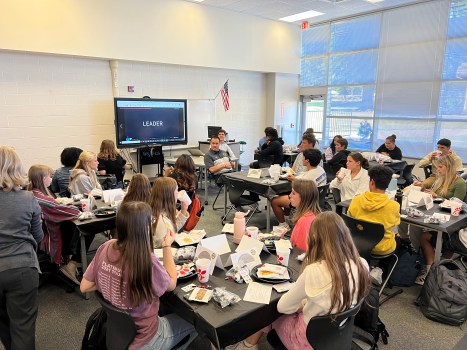 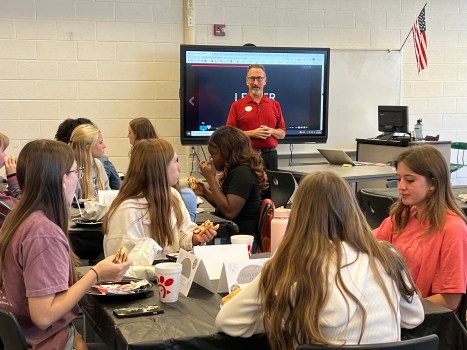 Thirty members of the West Forsyth Student Government Association are involved with a brand-new initiative — and the first among high schools in Forsyth County — for the 2022-23 school year as part of the Chick-fil-A Leader Academy.
The program began in 2013 and is a national high school leadership program sponsored by Chick-fil-A operators that is focused on making an impact in a given community through action.
A kickoff celebration was held earlier this month in the West Forsyth media center. Students watched a video about different types of leadership from two of the founders of the program, who also encouraged servant leadership and emphasized moments of impact and how they can make a difference.
The students will participate in monthly “Leader Lab” meetings, get involved in regular community service events, and close the year with an Impact Project of their choosing.
David Moore, the operator of the Clemmons Chick-fil-A, said that he felt like the timing was right to get the Leader Academy going at West this year.
“As an operator, we’re encouraged to help facilitate the program with the schools and let them see what leadership can look like and help them with their leadership principles, Moore said. “These students will learn about what makes a great leader and will have an opportunity to put what they learn into action through the various service projects they will do. There are several different aspects of this program that will help everyone involved become more well-rounded. We recognize the importance of getting involved in the community and helping others and are thankful that Chick-fil-A, Inc. and Coca-Cola are partners that invest in this program so that we are able to do it.”
Kevin Spainhour, the principal at West since March of 2021, knew about the Leader Academy from his tenure as a teacher and boys basketball coach at Mount Airy High School and said he thought it would be a good fit in Clemmons.
Spainhour talked to the students during the kickoff celebration about what it means to be a leader and how he felt the West Forsyth SGA could make more of an impact at school and in the community through Leader Academy.
“He has recognized the value of our student government since he started here but also recognized that often times, the students involved in SGA were busy helping other clubs with activities and programs in service to others but had stepped away from developing an identity of their own,” said Laura York, an English teacher at West and one of the SGA advisors. “I had noticed a trend in which students were representatives but weren’t often as involved as I felt like they should be. It wasn’t their fault, though. I think it was the structure of how things had evolved, and I felt like we needed a change in structure.”
York said that when she found out about the potential for the Leader Academy to come to West, she mentioned it to the other SGA advisors, Stephen Langford and Tavia Gilmore.
“We wondered if this was something that we might be able to incorporate here,” York said. “When we were introduced to this, I was pleasantly surprised by how developed the program is. It impacts schools all over the country. We were able to watch videos about their impact projects and it was really moving to see a diverse group of students at these other schools coming together to really impact change. And I thought, ‘this would be really neat to do here.’ Being involved with this gives SGA a vehicle to participate in its own service project as a group in addition to learning about leadership.”
It will be the job of the SGA Executive Board to map out the service projects throughout the year as well as the Impact Project.
Some of the service projects — such as volunteering at a local soup kitchen at Thanksgiving and donating to an area food pantry are already in place.
“I think it’s important to show that West can lead by example to all of the other schools,” said senior Trichelle Cross, who is the president of SGA. “Leadership is not just a mentality. It’s an action. It’s not just being in charge of something, but it’s leading by example and showing others how to be an example in your school and in your community. It’s being mindful of what you do and what you say. I think that Leader Academy will make SGA stronger and closer throughout the school year.”
Senior Kate Schaffer, the SGA treasurer, echoed a lot of what Cross said.
“I think in the past, SGA poured ourselves out to other clubs and organizations on campus, but we weren’t really doing anything on our own,” Schaffer said. “I’m excited to learn from this and apply it to what we will do the rest of the year. What a great opportunity.”
Junior Marissa Vernon, the vice president of SGA, came away from the kickoff with plenty of good vibes.
“So many people in SGA showed up to be a part of this,” Vernon said. “Having this opportunity s really cool because we are the only school in Forsyth County to have it right now. It’s really an honor that they thought of us for this. Once other schools see what we are doing, maybe they can bring it to those schools as well.”
York also recognizes the positive impact the program can have on not only West Forsyth, but the Clemmons area as well.
“Just knowing the association with Chick-fil-A and all the good vibes that come with that, what better partnership can we have than joining with Chick-fil-A and trying to do some good in Clemmons and in the area,” York said. “What a great opportunity these students have to participate in this. We are excited to see where it takes us.”