Wanna step outside? Flathead catfish are freight trains that will take you for a ride 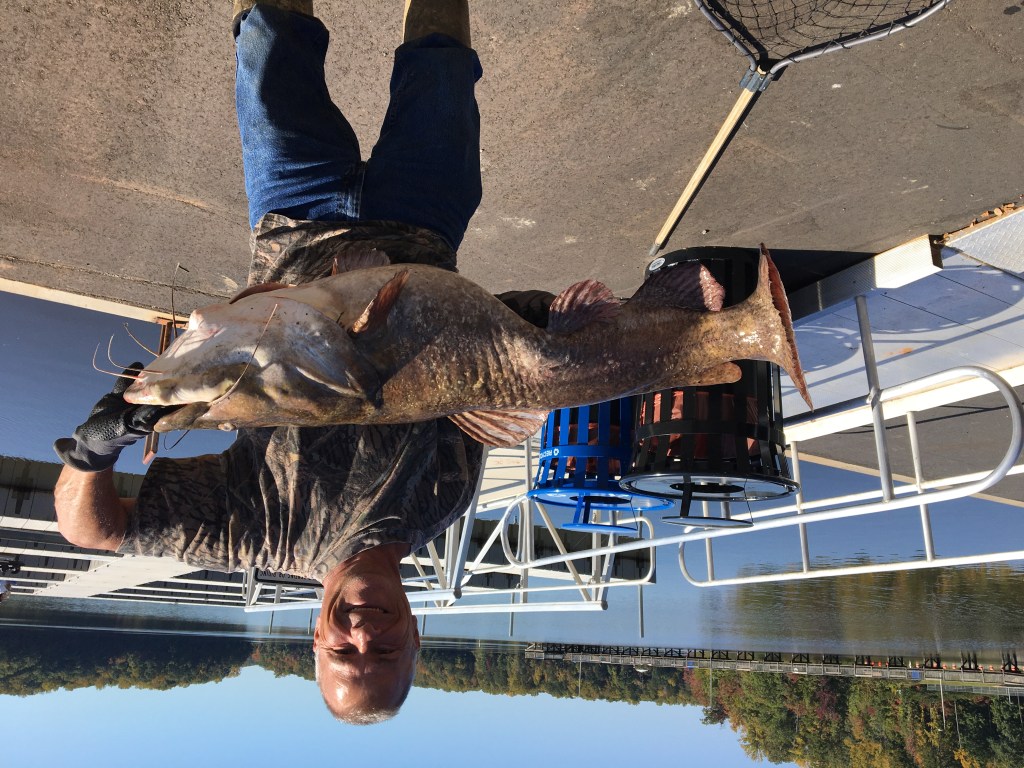 Submitted photo Randy Cardwell of Kernersville with the 38-pound, 14-ounce flathead catfish he caught at Salem Lake on Oct. 7.

The largemouth bass fishery at Salem Lake, Winston-Salem’s 365-acre municipal reservoir, has long been considered one of the state’s best. Biologists sample it with electroshocking equipment every couple of years, and it always ranks among the state’s best in terms of total numbers of fish sampled for the effort expended.

And surprise, it may not be the best fishery on the compact little reservoir, which is a secondary water source for the city’s residents. The best fishery, in fact, isn’t even supposed to exist.

The story starts back in the late 1970s when, according to several commission staffers, a hatchery truck from the state’s warm-water hatchery in Watha pulled up to the lake’s boat ramp to stock its annual load of fingerling channel catfish.

The truck had already been several other places; Salem Lake was its last stop before heading back down I-40 to Watha, a tiny hamlet a few miles off the interstate near Burgaw. According to the story, somebody on the hatchery truck asked city employees in the lake’s office if they could wash out the truck’s four holding tanks before leaving. The request was granted.

So a few minutes later, when they started flushing water through the tank that had held fingerling flathead catfish for stocking in W. Kerr Scott Reservoir in Wilkes County, a handful of little catfish were still in the tank, and they suddenly became residents of Salem Lake.

Almost 50 years later, they may have become the reservoir’s signature — and accidental — fishery. It was first discovered, also quite by accident, in the late 1980s when two biologists piloting an electroshocking boat to sample bass, bream and crappie, stunned a hefty flathead — estimated at around 20 to 25 pounds — that floated to the surface, stayed there for a few seconds, then flipped its tail and returned to the lake’s depths.

These days, hardly a week goes by without some fisherman, often unsuspecting, hooks into a big, yellow-brown freight train and gets taken for a ride. Bass fishing two weeks ago, the ride I took lasted five or six seconds before the fish spit out my 10-inch plastic worm.

There haven’t been a lot of studies done on flathead catfish by scientists. We know they are long-lived eating machines, in adulthood, possessing mouths big enough to easily inhale a volleyball — much less a 5-pound bass.

Unlike their catfish brethren, they aren’t scavengers, attracted to the nastiest-smelling offering on the bottom. They mostly eat other fish — bass, bream, crappie, shad, whatever is available. Their crack cocaine might be bullheads, smaller catfish common to river systems. A prime example? The Yadkin River downstream from Idol’s Dam in Clemmons has been completely stripped of bullheads by the flatheads present there. The Yadkin River upstream from the dam is full of bullheads, safe because the big predators are absent from that area. And unlike blue catfish, the other huge predator catfish, they don’t top out at about 50 inches and just get fatter and fatter; they continue to grow in length as well as girth as they age.

North Carolina’s state-record flathead, caught in July 2020 in the Neuse River, weighed 78 pounds, 14 ounces. The all-tackle world record, a 123-pound monster, was caught in 1998 in Elk City Reservoir in Kansas. Salem Lake’s record catfish — on display in the lake’s tackle shop — weighed 55 pounds, 8 ounces and was caught by Robert Grubbs on June 3, 2003. Grubbs and the late Robert Strickland remain head-and-shoulders above the rest of the lake’s anglers in terms of catching big flatheads, although Randy Cardwell of Kernersville has dominated fishing since late July when the lake’s boat ramps reopened after being closed by construction since early September 2021. Cardwell has put 16 catfish over 5 pounds on the tackle shop’s “brag board,” including flatheads weighing 40 pounds, 3 ounces, and 38 pounds, 14 ounces.

“I have been fishing Salem Lake for 3 or 4 years,” Cardwell said. “I knew there were flatheads in there, but I hadn’t paid any attention to them until I tied into one one afternoon.”

Since then, most of his time and fishing efforts have gone into battling the big catfish, with an array of rods and baits anchored in rod holders on the gunwales of his aluminum boat.

“If you don’t have your (reel’s) drag set and you don’t have the rod in a rod holder, it’s good-bye when one hits,” he said. “When they take it, they just drive off. They do whatever they want, and you’ve got to let them do it.”

When Cardwell hooked his 38-pounder several weeks ago, he maneuvered the fish into open water and let it pull his boat around until it was exhausted and ready to be netted.

“You just hold on and let him swim around until he comes up with his tongue hanging out,” he joked. “I like to let ‘em run around until they start blowing bubbles. If you don’t let ‘em blow bubbles, when you release ‘em, they’ll have a hard time getting back down to deep water (because their air bladder is engorged).”

Cardwell says he catches flatheads and their smaller channel catfish cousins in some of the same areas, typically while drifting a variety of baits.

“I have caught ‘em anchored up and (casting), but not nearly as many as I do drifting. The flatheads are temperamental; you’ve got to really fish hard to catch ‘em.”

The first part of North Carolina’s three-part duck season opens on Friday for a two-day run in the state’s “inland” waterfowl zone — west of I-95. Hunting will be allowed on Friday, Oct. 21, and Saturday, Oct. 22, from 30 minutes before sunrise to sunset.

The daily bag limit is six ducks, but few hunters will approach that since the great majority of ducks taken in October will be native wood ducks; hunters are limited to three woodies per day.

Most of the damage will be done on rivers, larger streams and smaller bodies of water with oak trees along their banks; woodies and other ducks are suckers for acorns. With what looks like a big acorn crop this fall, a few mallards might be included in the right areas. The daily bag limit for greenheads is two, with only one hen mallard allowed.