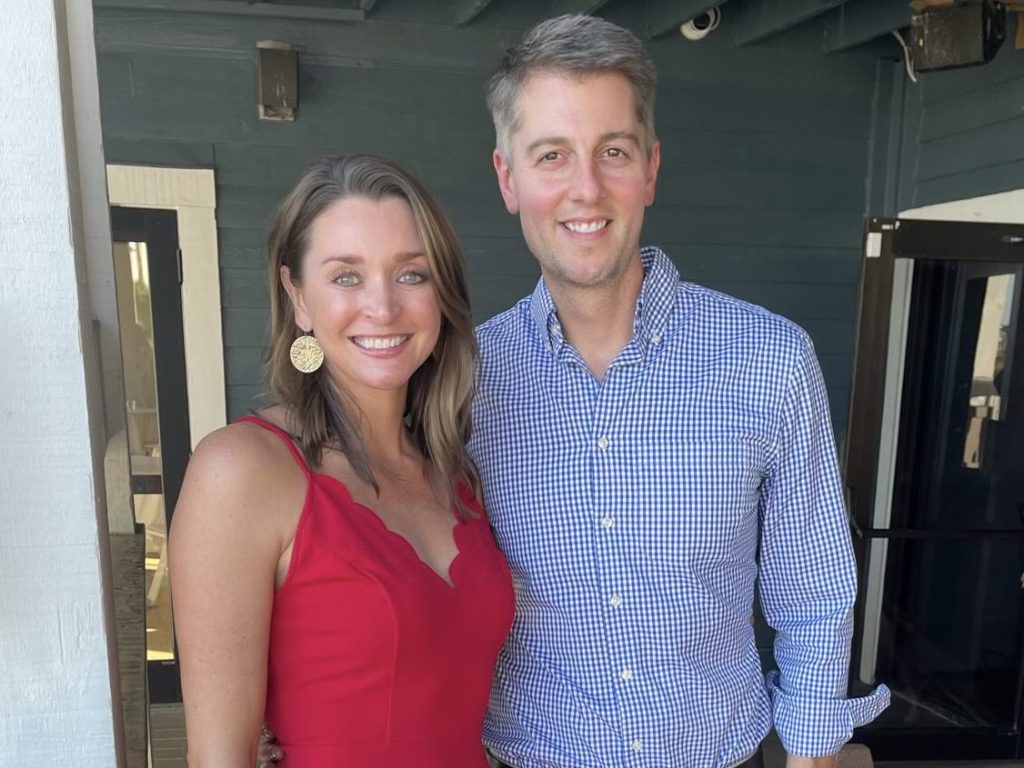 Submitted photo Meredith Means and her husband, Will

Meredith Means grew up in Winston-Salem as the second oldest of three siblings. “My parents had us in activities early on, and I really took to gymnastics. I realized in middle school though it was getting tougher to do because I was getting taller. It made it challenging to do flips, and I also worried it would stunt my growth. I began to do cheerleading instead and enjoyed it tremendously,” Means said.
Means continued to do cheerleading in high school at Mount Tabor.
“At the end of high school, I went to summer practices at Appalachian State University where they had scouting opportunities. I loved the feel up there at Appalachian and knew I wanted to go to college there,” she said.

Means was accepted to ASU and tried out for their cheerleading program. “I didn’t make it my first year and I was really bummed. As a kid, it was one of the tougher setbacks at that time for me because I had worked hard,” Means said.
Means had learned perseverance as a child and tried out again her second year. “I was on the team every year after that for the remaining three years at ASU,” Means said.

While at ASU, Means focused on public relations for her degree. “I enjoyed doing presentations and saw the applicability of the major in the real world and geared towards my skill set,” she said.

During Means’ senior year, she met her future husband, Will.
“We had a lot of mutual friends, and when we realized we were not only from the same town but lived on the same street it seemed like an even crazier and small world. We became really good friends at first, and then when he was in a pretty severe car accident, we realized that we cared about each other much more,” Means said. “We began dating not long after his car accident.”

Will and Meredith’s relationship endured distance too. Meredith had moved to Charleston, South Carolina, not too long after graduating. Will, who was a year behind Meredith academically, accepted a job in Winston-Salem.
“I was enjoying living in Charleston and had a good job in sales with Coca-Cola at that time. But I knew that Will wasn’t going to move, and I wanted to be near him. I left my job to come back home to work for Labcorp in their sales department,” Means said.

With Will and Meredith being back in the same town, getting engaged and married was the appropriate next step in 2010. “I always knew that I wanted to be a mom too. We were pregnant with our oldest son, Tripp (10) just six months after getting married. And just a year later, we had Leo (9),” Means said.
“When I had Tripp, he didn’t eat or sleep. I just assumed that’s how it was, until I had Leo. It was much easier, and I started to talk to the doctors more and more about my concerns. I almost felt like they tried to talk me out of being concerned about his lack of sleeping or eating, and other signs like staring off into space that pointed towards autism,” Means said.

Wanting to find answers and provide as many resources as possible for her son, Means learned about the Children’s Developmental and Services Agency.
“When Tripp was about 2½ years old I learned that they would come to your home, assign you a caseworker, psychologist, and set you up with behavioral therapists, and everything you need until the age of 3,” Means said.
“Tripp was diagnosed with autism at 2½ years old, so my window for working with them was small, but it was incredibly helpful. At that point, it was suggested to go into regular preschool. However, we realized quickly that wasn’t going to work. We had learned about ABC of NC when Tripp attended summer camp there. We had him there for several years and that truly helped change his life. We were so lucky for the support he had.

“During COVID-19, we made the decision for Tripp to do homeschooling and work with the Behavior Consultation & Psychological Services (BCPS) in Clemmons to provide him with an individualized plan to help support him. Tripp is high functioning, and they really helped tailor to his specific needs. They don’t just send you to a clinic. They go into your home, other children’s birthday parties, and family gatherings to really understand your child and help them.

“A good friend of mine had approached Winston-Salem Christian School to create a program for children who were high functioning like Tripp that still needed support in the classroom. We were so grateful to learn that they were interested in doing that and partnering with BCPS to make it a collaborative effort. The kids are exposed to typical peers, and still get the academics they are capable of doing with support. Really it is everything we have ever prayed for. It goes all the way to high school, too. This program is called the Autism Academy within Winston-Salem Christian School, and currently it has enrolled students in grades three through six. Each year the program continues to expand. It’s been incredible to see what doors this has opened for Tripp and other kids who have benefited from a community coming together to support these children.
“I have also been lucky to have support from my mom and mother-in-law who have helped every step of the way too. When Will was working full time, traveling a lot, and getting his MBA at Wake Forest University, they were always there to help support us.”

Means reflects, “It can feel very isolating when your child is different. And it’s frustrating because when you experience dead ends, you know you can’t give up. But over the years my support system has helped sustain me whether it’s my group of girl friends at the YMCA or the Imago Dei Bible study group. I show up when I can and enjoy getting such positive energy from them. I treasure that time and when I get to go on dates with Will. The little things mean the most.”