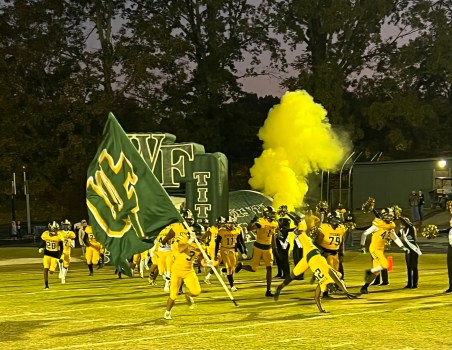 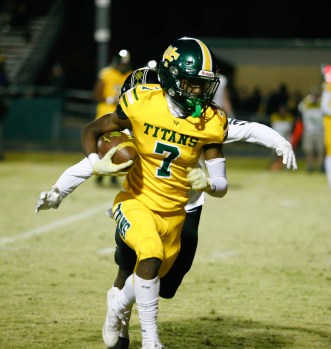 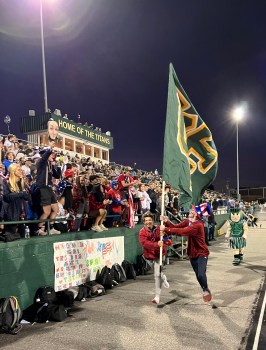 It wasn’t the prettiest of wins Friday night, but West Forsyth will take it.
Caman Chaplin rushed for 215 yards on 23 carries and three touchdowns to help West Forsyth wear down Reynolds on Senior Night for a 31-10 win in a Central Piedmont 4-A game at Jerry Peoples Stadium.
West improved to 4-5 overall and 4-2 in the CPC and has a state playoff berth in its sight. It will close the regular season Friday at East Forsyth.
The Demons (2-7, 1-5) squandered some early scoring opportunities and fell to 2-7 (1-5).
West started slow — including a botched kick return on the opening kickoff of the game — but picked up steam to lead 14-7 after the first quarter.
Alex Calhoun kicked off and Jordan Stephens of the Titans bobbled the ball several times, and the Demons recovered on Titans’ 8-yard line.
Reynolds failed to capitalize, however, as its 22-yard field-goal attempt sailed wide right.
“We had talked about it all week that we kind of needed to get going, and if we got going, we felt good about it,” Coach Adrian Snow of West Forsyth said. “And it was like the exact opposite. Like we said, ‘We can’t come out and put it on the ground, and we can’t have penalties, and we’ve got to be clean. We don’t have to be perfect. We’ve just got to be sharp.’
“And we weren’t. But I told the kids I was proud of how they handled it, that we just didn’t let it take us.”
The early malaise for the Titans continued on the ensuing possession. On successive plays, the Titans were called for an offensive face mask and a false start. At that point, Snow had seen enough and called timeout with 9:35 left in the first quarter.
“I didn’t settle them down. It wasn’t a settling,” he said. “It was a, ‘Let’s get going and let’s do what we need to do, in no uncertain terms.”
West Forsyth’s drive stalled, and Reynolds took possession at the West Forsyth 46. Three plays later, quarterback Lane Albright fired a 21-yard touchdown pass to Justin Williamson with 6:57 left in the first quarter to take a 7-0 lead.
“I just told the kids, ‘We’ve got a very slim margin of error,’” Coach Pat Crowley of the Demons said. “…I credit our offensive coaches and defensive coaches. I thought we had a good plan of attack against them today. We kind of mixed it up on them. I don’t think they were ready for some of the stuff we were doing, and our kids played hard.”
Reynolds attempted an onside kick on the ensuing kickoff, but West Forsyth recovered it at its own 44. Eight plays later, Chaplin galloped in for a 3-yard touchdown to help knot the game at 7-7.
“It was such an odd game. I can’t lie to you,” Chaplin said. “Everyone was sick, everyone didn’t feel well. The first drive was the worst. That’s all I can really say.”
On Reynolds’ next possession, it punted, but the snap went over the head of the punter, and West Forsyth took over at the Reynolds’ 27. Chaplin scored one play later on a 27-yard touchdown run for a 14-7 lead.
“They’ve got some guys that can play,” Snow said. “They’ve got a kid going to the Shrine Bowl (Tashawn Jeter), the quarterback played really well for them tonight. But I was proud of our kids of how we kind of kept going and took care of business.”
West Forsyth added to the lead on the next drive after place-kicker Alejandro Morillon nailed a 44-yard field goal with 5:18 left in the second quarter to push the lead to 17-7.
Reynolds responded with a 13-play drive the finished with a 31-yard field goal at the buzzer to make it 17-10 at halftime.
After bending but breaking for much of the game, Reynolds gave up a 70-yard touchdown run to Chaplin with 3:59 left in the third quarter to help extend the lead to 24-10.
West Forsyth finished with 195 yards rushing on 30 carries and had 252 total yards, and Reynolds had 64 yards rushing on 35 carries, and Albright finished 15-of-25 passing for 160 yards and a touchdown and an interception.
The West Forsyth defense also buckled down and held Reynolds scoreless during the second half.
“(Chaplin) broke that long one,” Crowley said. “That was a killer right there because our defense was playing pretty well. We can’t give other teams short fields. So, there’s a couple things there in the second half that’s happened to us almost all season. Part of it is, we don’t have a lot of depth.”
Any chance Reynolds had of coming back was erased with 10:41 left in the fourth quarter after Stephens caught a 4-yard touchdown pass from quarterback Bert Rice to extend the lead to 31-10.
“We slammed the ball up in there, which is a big deal,” Snow said. “We had a couple kids sick. But we had some kids step up, which was nice.”

Notes: West honored 23 senior members of the football team and three support staff in a pre-game ceremony. Senior cheerleaders, Titanides and band members were also recognized at different points during the game.