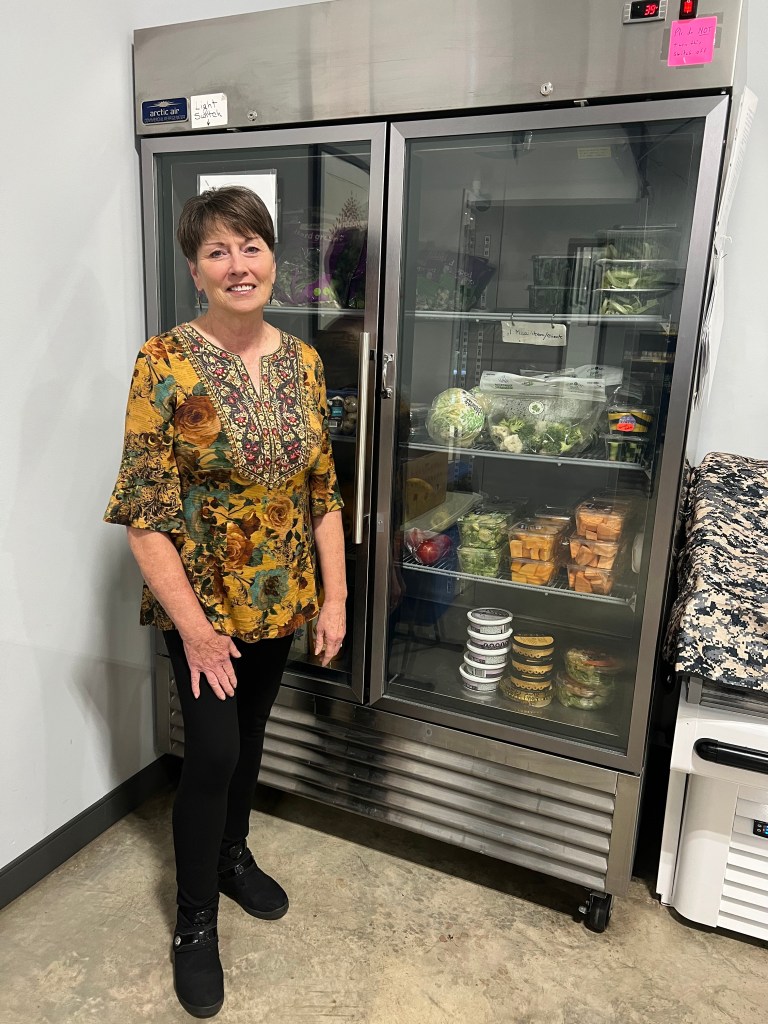 Kathy Kovack was recognized by the Clemmons Town Council Monday night for her service to the Clemmons Food Pantry. Kovack recently retired from her role as the executive director.

After hearing a review of the latest quarterly stormwater report in Monday night’s meeting, the Clemmons Village Council looked ahead in exploring a long-term action plan related to one of town’s top priorities now and going into the future.
Following the report from Emily Harrison, stormwater technician, on proceeding with work on regular culverts with the additional American Rescue Plan funds, council member Mike Combest asked about future forecasts.
“That’s a great report,” Combest said. “It’s clear, relevant action, which is most important. Is it possible to forecast how much funding the culvert repair you mentioned might require in the next five to 10 years?”
Harrison said that the stormwater department is currently going through all the regular culverts that are not on the village’s Capital Improvements List.
“We’re trying to get as many as we possibly can with these funds that we have,” she said. “We have completed three and are in the process of doing another two. Right now we have close to 50 of just regular culverts.
“The price range depends on how long the linear foot is. Right now, it has ranged from $16,000 to $28,000. There are other things that can impact the costs. I don’t really have a time frame for you. I’m hoping in the next three to five years we can knock out a good chunk of these.”
Combest said that was “real useful information” and that it might be a good idea, if the council agreed, to ask the manager to look at a cost projection of the most likely case of culvert repairs “because that is must-do stuff and it might be in competition with some other things that we see coming down the road.”
Mayor Mike Rogers said that whatever is done must be coordinated with the road paving program.
Harrison added: “When we do know what the next road paving schedule is coming out that will help leapfrog some of these other ones or to make sure we don’t have to go back and dig up a perfectly fine paved road that we just spent money to pave. That’s why we’re trying to look at all of these. We’re trying to stay on top of this the best we can.”
Finance officer Ann Stroud pointed out that the council had already received information from Wes Kimbrell, former stormwater director, at budget time this year on the major capital improvements and that Harrison was just “talking about minor stuff.”
Combest countered, saying, “If I heard you right, all of these minor things could add up to a big chunk of money.”
Harrison said that the culverts Combest was referring to are all in the public right-of-way.
“There are some culverts we haven’t even got to look at yet because it does go so far into the private side,” she said. “Then we need to talk to homeowners about the Cost Share Program once we go off the right-of-way. You can’t use public funds on private property outside of the Cost Share Program.”
Council member Bradley Taylor said, “It sounds like to me that this would be a great topic for the next retreat.”
Rogers then summarized: “What I understand is that Mr. Combest wants to coordinate the Stormwater and the Public Works Department and make sure that they are on the same page and linked together and that events occur in the correct order.”
In the quarterly report, which covered the July-September time frame, Harrison’s review included minor culvert replacements at Springvalley, MacNutt and Pheasant Walk, 29.5 tons of debris swept up in commercial corridors and 4.1 tons of debris swept up in residential corridors during those months, and that 12 roadways have now been adopted by 10 groups/families with four new roadways being assigned in the Adopt-A-Street program.
In other agenda items involving stormwater, the council approved a proposal from LJB Engineering for $48,000 to develop construction plans and bid documents for culvert improvements at Greendale Way, which is next on the stormwater Capital Improvement Plan project list.
Also, the council approved Ordinance 2022-12 amending Ordinance 2021-05 Village Participation in drainage projects across private property (50-50 Cost Share Program) – where the total amount contributed by the Village of Clemmons shall be 50 percent of the total project cost, not to exceed $10,000 per property. 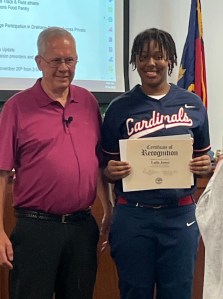 Jim Buice photo
Laila Jones was recognized by the Clemmons Town Council and Mayor Mike Rogers during Monday’s meeting for her achievements over the summer in track and field, which included winning several national events in both the shot put and discus and establishing new records for her age group. Jones is a seventh grader at Clemmons Middle School.

In other highlights from Monday night’s meeting, the council:
• Approved a settlement agreement of $5,000 to go toward attorney’s fees after hearing from Elliot Fus, village attorney, in a follow-up of prior discussion in closed session after Clemmons filed a lawsuit toward the end of last year against Greek Empire LLC with regard to some noncompliance with the village’s stormwater driveway ordinances. Fus said that they were brought into compliance, but Clemmons also made a claim toward some civil penalties resulting in the settlement agreement in which Greek Empire LLC offered to reimburse the village $5,000 for attorney’s fees that were spent on this lawsuit. Fus was asking for approval of the settlement agreement “so we can get this finalized.”
• Recognized Laila Jones, a seventh-grade student at Clemmons Middle School, for her national accomplishments in track and field, and Kathy Kovack, who recently stepped down as executive director of the Clemmons Food Pantry. Kovack joined the organization as a volunteer in 2004 before later becoming development manager and then a board member prior to being named executive director in 2016. The month she took charge, the pantry received nearly $40,000 of in-kind donations. Under her leadership, the pantry is now housed in a new, permanent location and accepting nearly $60,000 in in-kind donations per month.