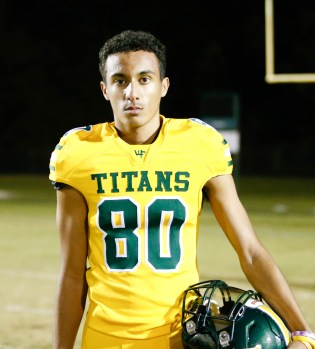 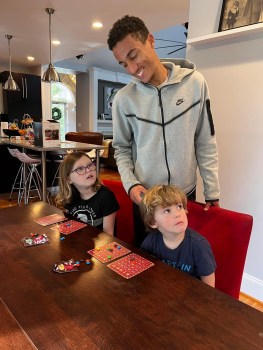 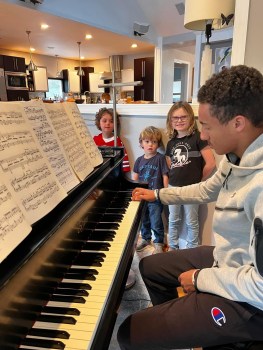 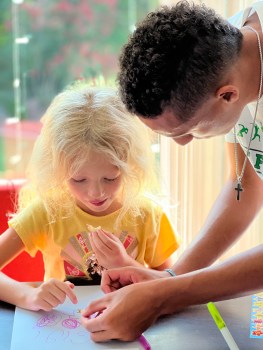 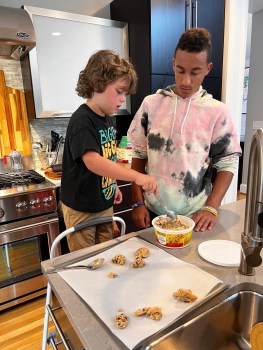 Most afternoons in the fall, Dylan Williamson, a junior receiver for the West Forsyth football team, is at practice taking instruction from his coaches and preparing for that week’s game.
Occasionally on certain Sundays, however, he is the one doing the coaching through Dylan’s Fun Corner, which offers a few hours of activities for children in Williamson’s neighborhood that he leads at his house.
Last summer, Williamson coached his neighborhood swim team, the Waterford Stingrays, which is where he first gained experience working with children.
“I’ve always liked kids, especially younger ones; I kind of found that out last summer when I started coaching,” Williamson said.
It quickly became apparent that the kids loved him too.
“A bunch of parents came up to my mom to tell her how good I am with the kids,” he said.
To Williamson, coaching hardly felt like a job.
“I’ve just enjoyed being around the young ones a lot because they’re enthusiastic, have a lot of energy, and just make your day better,” Williamson said.
He and his mom, Sabina Leztuzzi-Williamson, agreed that it was important to maintain those connections once the summer was over and together they came up with the idea of the Fun Corner.
Every other Sunday afternoon since the beginning of the school year, Williamson has had around eight neighborhood kids over to his house. Most of the kids are lower-elementary school aged, and he even has some regular attendees. Reading is always part of the session, but Williamson also plans a variety of fun activities that range from cooking to music to games. These activities differ from week to week to keep the kids excited.
“We always add games at the end so they can have a little bit of fun,” Williamson said. “Last Saturday we played candy bingo.”
While the kids are having a good time, they are also experiencing the importance of trying new things.
“Overall (it’s) just something to get the kids out of their comfort zone and to teach them that at a young age… and also getting them used to being around people they’re not around every day,” he said.
Williamson wants to make sure that they have someone in their life who encourages them to expand their boundaries, just as he was.
“Growing up, my mom always introduced me to new things,” Williamson said.
Williamson admits that even though he is close with his parents, it can be easier to talk to a friend, which is why he believes it is important that these kids have access to a mentor early on.
“I don’t like telling my parents certain things, but if one of my best friends was to ask, I would immediately open up to them,” Williamson said.
Parents can also rest assured that their child’s confidant has their best interest in mind.
“At that age it can be hard for them to talk about things, but if you get them to open up, it means a lot to them and their parents knowing that they actually have someone to talk to,” he said.
Given the building of confidence and trust in one another, perhaps The Fun Corner moniker woefully undersells all that is happening at the Williamson home. Dylan’s generosity of spirit is making a real difference in the lives of his young neighbors.
Fun Corner indeed.