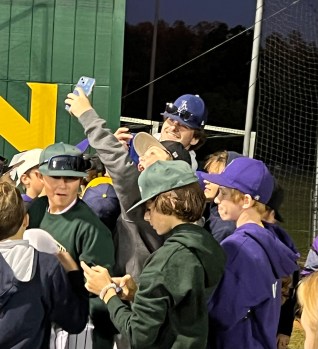 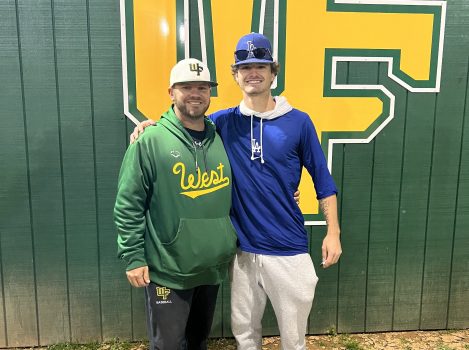 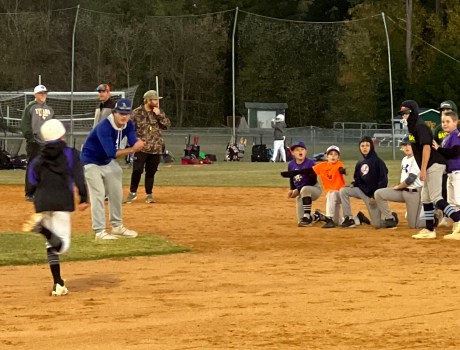 Marc Pruitt photo Payton Martin encourages a player during a baserunning drill during last week's camp at West Forsyth. About 150 kids showed up to participate.

The accolades keep piling up for Mary-Paige King and the West Forsyth girls golf team.
King fired a 3-under 69 last Monday at Longleaf Golf and Family Club to tie for first place at the 4A Central Regional and qualify for the NCHSAA 4A state tournament, which was played Monday and Tuesday at Pinehurst No. 6.
The girls team finished third to grab the final team qualifying spot, edging Central Piedmont 4A rival Reagan by one shot.
Paige Sidney (79) and Sadie Mecham (88) joined King to represent the Titans at the state championship tournament.

Payton Martin returned to the baseball field at West Forsyth Wednesday night to help lead a camp with 150 children ages 5-14.
Martin, who graduated from West in June, was drafted by the Los Angeles Dodgers in the MLB Draft in July and spent the rest of the summer working out with the organization.
Martin led drills and hung around once the clinic was over to sign autographs and pose for photos with the participants.
Brad Bullard, the baseball coach at West, organized the camp and had help from his coaching staff and a host of current Titan players.

Congratulations to the boys and girls cross country teams at West Forsyth for both placing second in the Central Piedmont 4A Conference Championships Wednesday at Ivey Redmon Sports Complex in Kernersville.
The boys team finished with 57 points, seven points behind Mount Tabor and the girls were also runners-up to Mount Tabor in the team standings.
Sophomore Lulu Serang was the top individual for the West girls, finishing in 19 minutes, 19.89 seconds for seventh place, while Abby Reutinger (19:31.57) finished ninth.
Serang, Reutinger, Sophie Cowart (19:59.37), Tenley Douglass (20:14.77) and Lillian Douglass (20:25.72) finished 13th, 14th and 15th, respectively. All six earned all-conference recognitions
In the boys race, Brandt Doty finished second in 16:03.85 and Wesley Haggstrom was fourth in 16:21.77.
Connor Haldeman finished 14th in 17:00.44 and Wyatt Stephens was 17th in 17:26.19.
Doty, Haggstrom, Haldeman and Stephens also earned all-conference recognitions.
Next up for the Titans will be Midwest 4A Regional on October 29, also at Ivey Redmon.

Junior tennis player Samantha McEachran won her first two matches at last week’s Midwest 4A Regional and advanced to this week’s NCHSAA 4A state tournament as the No 4 seed.
McEachran has won three straight Central Piedmont 4A singles tennis championships.