Run it back: Titans, Eagles to meet in first round of 4-A playoffs 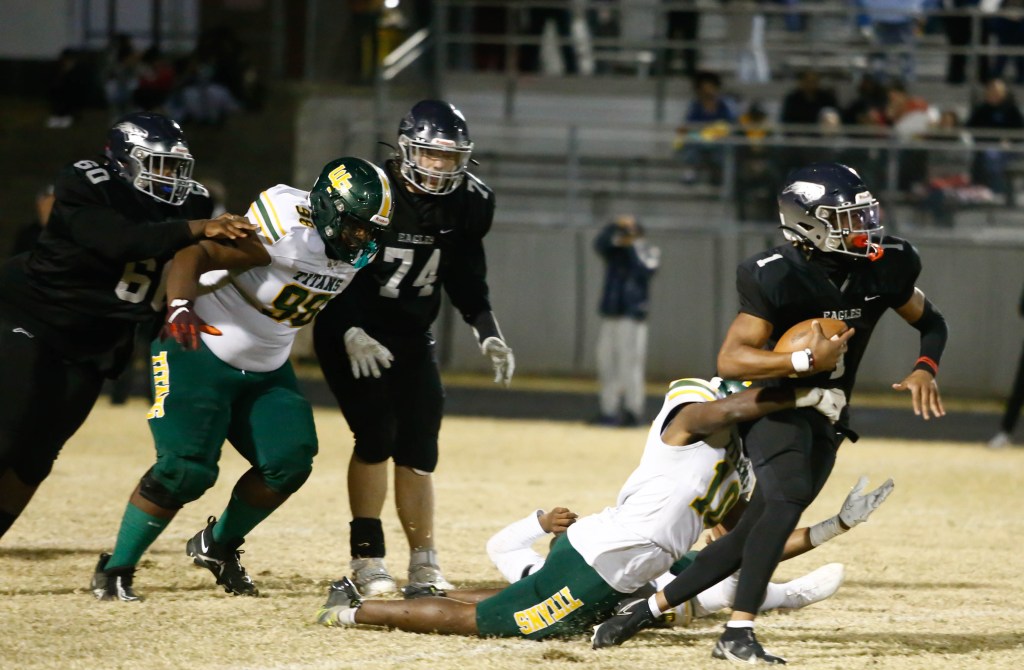 Brad Richard photo West Forsyth's Caleb David (10) drags down East Forsyth quarterback Jaylen Raynor while Kaleb Benson (98) follows closely behind during last week's 53-7 loss to the Eagles. West and East will meet again Friday night in the first round of the NCHSAA 4-A playoffs in Kernersville. 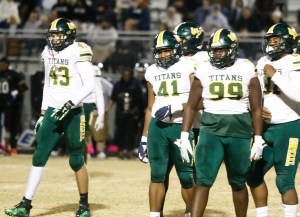 Let’s do this again. Let’s have a do-over.
Whatever phrase you choose to use, cross-county rivals West Forsyth and East Forsyth will have the unique opportunity to play a football game against each other for the second straight week.
Less than 24 hours after East Forsyth beat West Forsyth 53-7 last Friday night in the regular season finale at Fred E. Lewis Stadium in Kernersville, both teams found out that they were seeded to play against each other Friday night in the first round of the NCHSAA Class 4-A playoffs.
The game, which will once again be played in Kernersville, pits No. 29 West Forsyth (4-6) against No. 4 East Forsyth (10-0).
It gives the Titans, who dealt with myriad illnesses this past week, a chance at redemption.
“When your RPI is what it was — our opponents’ winning percentage was the highest in the West,” Coach Adrian Snow of West Forsyth said. “We played good people. We did some good things during the year and that’s where we’re at. Now, we’ve got to go play.”
East Forsyth has been dominating this season, outscoring its opponents 471-89, including 189-7 in the last four games. However, the slate is wiped clean in the playoffs, with what Coach Todd Willert calls the third phase of the season. The first phase is the nonconference schedule, and the second phase is the conference schedule.
“I kind of knew this was the process and something that might happen,” Willert said. “You know, it is what it is. It’s a good thing. I’m excited. Kind of cool to get to play them again. But, hey, it’s the playoffs. We don’t care who we play. We just want to win and advance.”
All eight coaches convened for the Central Piedmont 4-A Conference meeting Saturday morning, where it was all smiles. Five CPC teams made the playoffs.
“I’m sitting there laughing with Antwon Stevenson (head coach at Glenn),” Willert said. “That’s why I love this conference. At the end of the day, we’re going to fight for our kids. But you know what, Adrian Snow, Antwon — we’re going to sit there and laugh and have a great time. And that’s what makes this conference great.”
The oddity of playing the same opponent twice in consecutive weeks is not unique to Snow. In 2018, West Forsyth defeated Reagan 21-16 in Pfafftown in the final regular-season game of the season. The next week, Reagan traveled to Clemmons for the first round of the NCHSAA 4-AA playoffs, when the playoffs were still subdivided, and Reagan won 34-20.
“You’ve just got to line up, see what we did wrong, fix some things, add a few wrinkles here and there, and go play,” Snow said. “There isn’t any magic bullet. You’ve just got to take care of business and hopefully have a good mindset with the kids. And let’s go play.”
It’s also not the first time West Forsyth and East Forsyth will have met in the playoffs. The two teams met the day after Thanksgiving in 2015 in Kernersville in the quarterfinals the NCHSAA Class 4-AA playoffs. However, the teams were in different conferences then — West Forsyth was in the Central Piedmont 4-A and East Forsyth was in the Piedmont Triad 4-A.
East Forsyth won that game 31-6.
“This will be the first time I’ve ever played back-to-back against somebody, so it will be a little different,” Willert said. “We’re excited. The big thing is, we get to play at home. It’s always hard to come to ‘The Nest.’
“We got out of the game (last week) healthy. We know they’re going to be a lot better just because of the illnesses that they had. So, we know we’re going to face a different West Forsyth team. The players already know that, the coaching staff knows that. So, we know it’s going to be a big difference from the last game of the regular season to this one.”
Despite the lopsided game this past Friday, there is still much to learn from it.
“We kind of know what we were dealing with, which that’s kind of a caveat to the whole thing,” Snow said. “Right now, we’re where we’re at, hopefully have everybody full strength.”
Willert said there are still some things his team can learn from watching game film from last week’s win.
“We’ll be able to get a lot,” Willert said. “Obviously, just see what they did against us defensively because everything’s different from team to team, and we get to see that. And that will help us.”
Running back Caman Chaplin of the Titans, who has been dynamic throughout the season, was held to 44 yards rushing and a touchdown on 14 carries.
The Titans had a short-lived 7-6 lead in the first quarter following Chaplin’s 13-yard touchdown run and Alejandro Morillon’s extra point.
It was all East Forsyth from there, however, as the Eagles rattled off 47 straight points.
“The biggest thing, you’ve got to take care of the ball,” Snow said. “If we can take care of the ball, you limit some touches on their end and go from there. We had a fumble and an interception, and when you play against good teams you’ve got to try to have as little of issues with that as you can. You can’t give them the ball.”