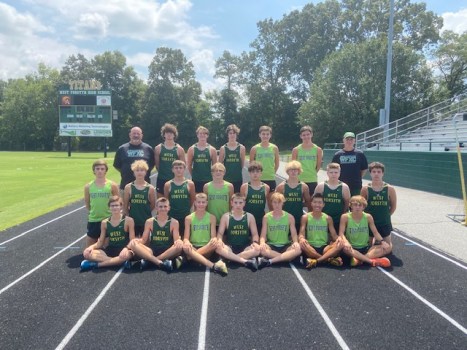 Runners from across North Carolina descended upon Ivey M. Redmon Sports Complex in Kernersville this past Saturday for the NCHSAA state cross-country championships.
Two of those teams represented were the West Forsyth boys and girls, which competed in the 4-A state meet.
The West Forsyth boys finished 21st with 461 points, well back of champion Cary Green Hope, which finished with 124. The West Forsyth girls finished eighth with 268 points, well behind champion Waxhaw Cuthbertson, which finished with 32 points.
The boys team didn’t go into the state meet — or last week’s Midwest 4-A regional meet — at full strength.
They had to overcome the loss of senior Brandt Doty, who earlier this season, along with senior Wesley Haggstrom, broke the school record in a 5K race (3.1 miles) at the adidas XC meet in Cary.
Doty finished second in the Central Piedmont 4-A Conference Championship meet on Oct. 19.
“We did a long run on Saturday after the conference championship. (Doty) looked like a million bucks,” Coach Nathan Newsome of the Titans said. “I didn’t talk to him Sunday (after the meet), and Monday he said, ‘Coach, I’m not at school today. I’m sick.’
“Then I think Tuesday night (before the regional meet), he said, ‘I’m not going to be at practice. I’m in the hospital.’
Newsome was thinking that it was the flu that struck the school hard that week.
“He said he had something called cellulitis,” Newsome said. “He had a bad cough and everything.”
He was discharged and Newsome told him to rest for the regional meet.
“A 70% Brandt still helps us for the regional,” Newsome said. “He called me on Friday (of the week of the regional) and said, ‘Coach, I’m in no shape to run. I’ve lost 10 pounds and I just can’t do it.’ He said you’re going to need an alternate. I said, ‘Well, OK. Sure thing, man. I hope you feel better.”
West Forsyth finished seventh in the regional and qualified for the state championship.
“If we have Brandt, we’re probably third in the region. Without him we were seventh.” Newsome said. “So, pretty big difference.”
The news went from bad to worse in the regional.
“As we were packing up the tent area one of the moms said Brandt’s mom messaged to let us know that Brandt’s back in the hospital. She didn’t want anybody to know because she didn’t want the team to be worrying about him,” Newsome said. “Brandt has a hole in his lung. And I’m like, ‘What?’
“And I gather he tore a hole in his lung coughing. I don’t know if it’s a perforated lung. I don’t know what the right terminology is, but I was like, ‘Holy crap,’ So, with that diagnosis, I pretty much knew that was the end of Brandt’s season.”
Not only was Doty out with illness, the Titans were without sophomore Shane Cornett, who was out with a knee injury.
Still, Haggstrom led all West Forsyth runners in the state championship with a 13th-place finish at 16:14.96.
“I asked Wesley and he said, I miss Brandt because that’s who my racing partner is, my training partner,” Newsome said. “He said, ‘I race better when Brandt’s in the race with me. And he said because Brandt’s usually in front of me. I think it just made it a little bit weird for everybody, but a good life lesson — stuff happens and you just kind of roll with it.”
At the state championship, senior Conner Haldeman finished 81st at 17:10.65, senior Wyatt Stephens was 138th at 17:54.67, junior Colby Groce was 163rd at 18:25.07, and freshman Gunnar Douglass was 167th at 18:32.01.
“For them to advance to the state meet, and finish 21st, essentially a top-20 team with missing two of your top-tier runners is pretty good,” Newsome said.

As for the girls, the Titans finished second in the Central Piedmont 4-A conference, fifth in the regional, and eighth in the state meet.
Sophomore Lulu Serang led all runners for West Forsyth with 38th-place finish at 19.44, behind junior Stella Kermes of Waxhaw Cuthbertson, who won the state championship at 17:40.94.
“(Serang) has been really consistent, real solid for us, especially these last three or four races,” Newsome said. “She’s a really good racer. She does well in races. She did about what I hoped she would do. So, that’s a pretty solid performance.”
Other than Serang for the Titans, senior Tenley Douglass, who is Gunnar’s sister, finished 55th at 20.07.57, junior Abby Reutinger was 69th at 20.24.89, senior Sophie Cowart was 75th at 20.31.75, and junior Lillian Douglass, another of the Douglass siblings, was 116th at 21.28.96.
“We didn’t really know what to expect for the girls,” Newsome said. “And then as the season started going, they were a good little bunch, good little pack of runners. By about mid-season, we kind of figured out that was kind of our thing, is that there wasn’t much of a spread between our No. 1 and No. 5.”
The times put up earlier in the season proved to hold during the state championship.
“They were about 45 seconds apart or something like that,” Newsome said. “And I started looking how the state was shaking down and I thought, ‘Man, we’re pretty good. You know, I think we might be a top-10 team all things being equal.’”