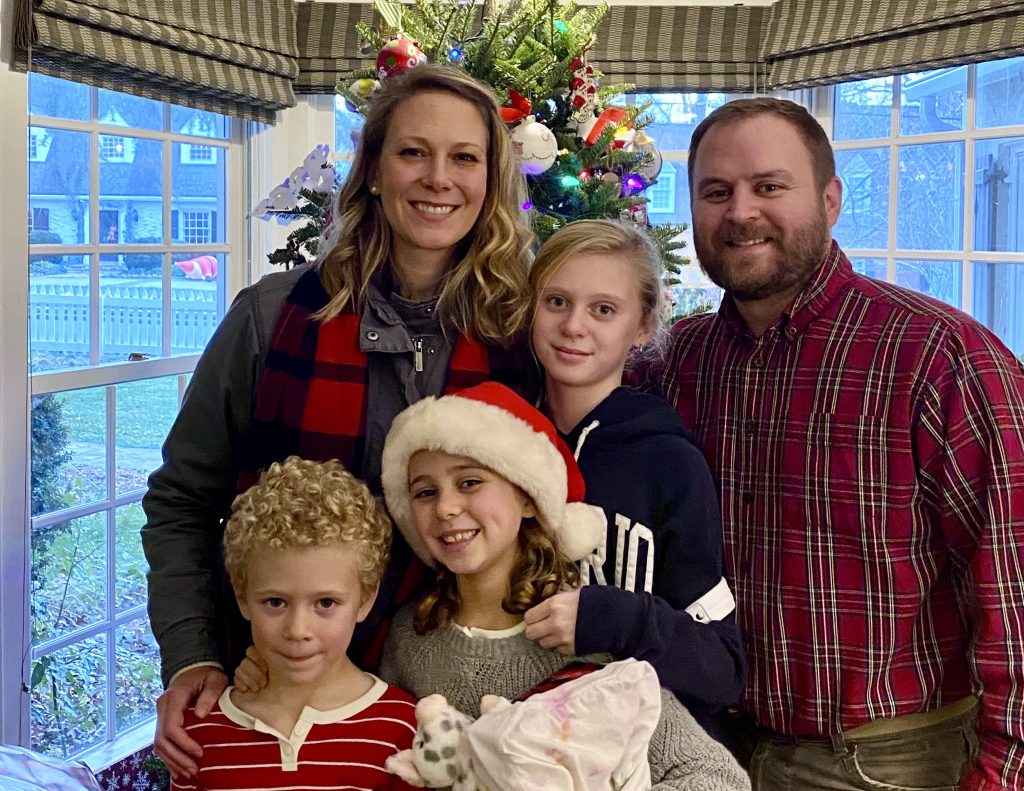 Katie Leach grew up in Goldsboro reading lots of books and playing soccer. The oldest of three siblings, Leach loved being active. “If I wasn’t buried in a book, I played on the Goldsboro travel soccer team, the Sting, and had some tremendous coach influences. Starting a sport at the age of 5 and playing coed mostly, it helped me improve because everyone else was better than me,” Leach said.

Leach continued to play sports in high school. Both her junior and senior years at St. Mary’s School in Raleigh, Leach played for their soccer team. “I also branched out a bit with sports and did track and field, and really got into field hockey. I had played soccer for so long I was good with my feet. I had a bit of an unorthodox way for playing goalie, and it worked when I would trap the ball with my feet and kick it up the field,” Leach said with a laugh.
Several smaller colleges noticed Leach’s natural talent in field hockey, but ultimately, she decided on attending North Carolina State University. “I chose NCSU because of its humanities department and figured I could still play club soccer and field hockey,” Leach said. Unfortunately, Leach tore her anterior cruciate ligament in her knee during the first game. “After recovering from my injury, I hung up my cleats and put my focus elsewhere,” she said. “I didn’t have to give up sports completely, but I played ones like tennis instead.”

Leach also embraced her studies while at NCSU by majoring in English and minoring in Spanish. After graduating from NCSU, Leach found a job as an experiential education instructor at a learning center on the coast, Camp Don Lee, where she taught hands-on science and ecology to elementary and middle school students. “I had attended Camp Don Lee as a child myself, and it was special to come back in that capacity. It’s a wonderful place. I had loved learning to sail too. I realized how much I enjoyed teaching and working with children and decided to attend East Carolina University (ECU),” said Leach on earning her master of arts in teaching (MAT) in secondary English.

While Leach was studying for her master’s, she also met her future husband, Daniel. “My roommate was in medical school with him, and that’s how we met. We didn’t date for long before getting married. I think we had blind trust that everything was going to work out,” Leach said with a laugh. “We got married in 2009.”
The newlyweds headed to Charlottesville, Virginia, for 10 years where Daniel completed his residency. “At first, we had hoped to stay in North Carolina, but we made some of the best friends while there and had our three children there, too. It holds a special place in our hearts because of it,” Leach said.
Children: Tyndall (11), Emily (9), and Woods (7) also had Leach re-evaluate teaching full time. “I had taught high school students after obtaining my degree from ECU. However, after Tyndall was a year old, I realized I wanted to stay home full time,” says Leach.

Although Leach wasn’t in the classroom as she was raising her young babies, she did continue with a business venture she had started at 18 years old. “I had always loved reading and writing. Several of my friends had asked me to help edit their essays for their college admissions. It evolved; I had begun tutoring students with their college prep courses too. I realized what I am passionate about is helping students pinpoint their goals,” Leach said. Thus, Keystone Academic Consulting came into fruition. “I typically work with seniors, and some ambitious juniors,”Leach said. “I feel like I have a good understanding of what colleges are looking for, and it’s really neat helping students in that process. It was something that I have been able to do with our multiple moves and I’ve enjoyed that.”

Leach has also gotten back into the classroom now that her children have gotten older. “I feel fortunate I was able to spend that time with my kids when they were very young. When I held them, the feeling of such profound love was overwhelming,” she said. “Now that they are in school themselves full time, I’ve loved getting back into working with children more on a full-time basis,” said Leach, who is a kindergarten teaching assistant at Summit School. “I get to teach with a wonderful teacher, Della Hinman, who has such energy and passion for working with kids at this age. It doesn’t even feel like a job. I like being at the same school that my children attend, too.”

“It’s really fun right now with the ages of my kids. There is light at the end of the tunnel,” Leach said. “They’ve got lots of activities that we attend, but seeing their personalities really emerge is so enjoyable. I’m able to still participate in my hobbies too of reading, writing, and occasionally picking up a guitar. I’m kind of a campfire guitar player.
“But spending time with my family and doing those types of activities are meaningful for me.”