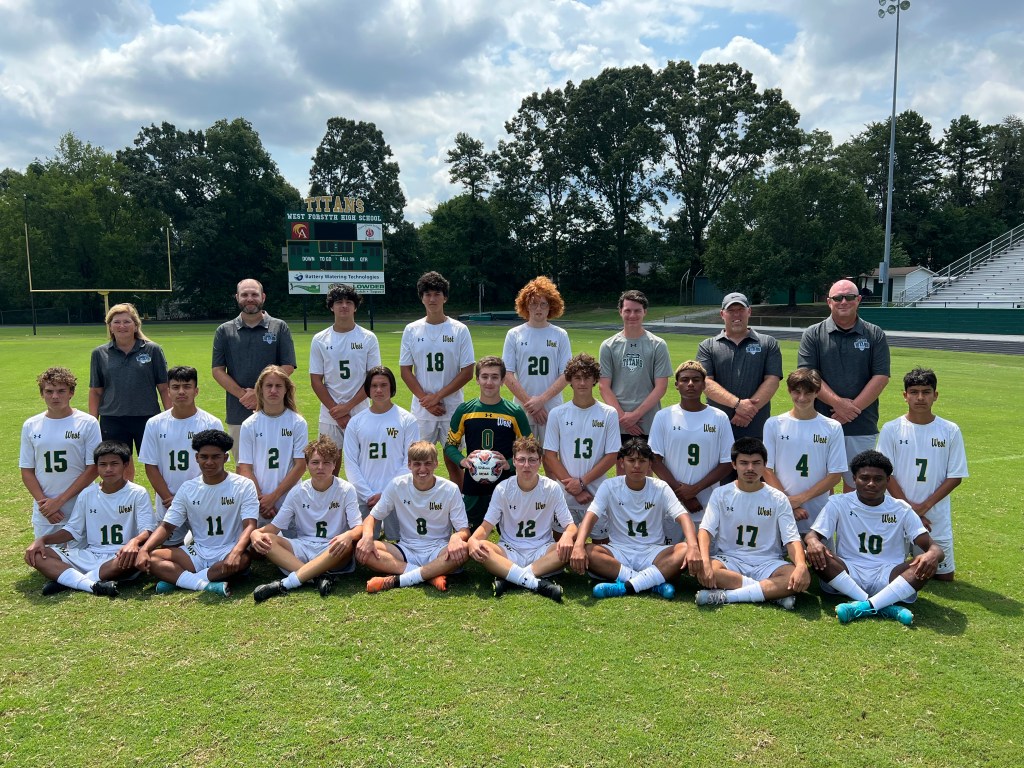 The boys soccer season at West Forsyth ended with a loss in the first round of the NCHSAA 4-A state tournament on Halloween night — a perfect metaphor for how the season shaped up for the Titans.
West Forsyth, which finished 10-10-4 overall and 9-5 in the Central Piedmont 4-A won six straight games during conference play, but the flu swept through the school late in the season and the soccer team wasn’t immune to it. West Forsyth had to face the top two teams in the conference — Reynolds and East Forsyth — in the final two regular season games.
Reynolds beat West Forsyth 6-1, and East Forsyth edged West 1-0 on Senior Night at Durwood Pack Soccer Stadium.
“Towards the end of the conference year we put together six or seven wins in a row,” Coach Jeffrey Williams said. “(We had) a tough last week with facing the top two teams in our conference. But we had three or four players with flu and two or three players with injury, and sort of battled through that, but with some adversity we still did the best we could.”
Even with losing the final two games of the regular season, West Forsyth was named the No. 28 seed in the NCHSAA Class 4-A West playoffs and had to travel to No. 5 Asheville Roberson on Nov. 3 in the first round.
“They were good. They were a solid team,” Williams said. “We gave up two goals in the first 7 minutes. After that we had some chances, especially in the second half, and that could’ve been a good outcome for us.”
Instead, West Forsyth could never bounce back from the two-goal deficit and lost 3-1, ending the season.
“It was good play by them for sure,” Williams said. “We had a corner in the first minute that we had an opportunity to score off of and didn’t score. And then they had a corner in the second minute and it bounced off our defender’s chest and dropped down on the ground and right in front of one of their players, and they knocked it in. Things can turn quickly.”
Even though the season ended with a first-round loss in the NCHSAA Class 4-A playoffs, that was quite an accomplishment given the outcomes of the first seven games of the season, which were all nonconference games. In those games, West Forsyth was 0-4-3 and was outscored 12-4.
“I knew we had a tough nonconference schedule. I didn’t realize how tough it would be,” Williams said. “Every nonconference opponent we had was in the playoffs. Ledford was the only non-4-A team that we played that was not in the 4-A playoffs, and they were in the 3-A playoffs.

“If you look at the eight (Class 4-A) teams that were in the West in the playoffs we played five of them in nonconference,” Williams said. “And just early on in the year we had trouble with just small details, and our first game of the year (Mooresville) we lost 2-1, two goals off of corners.
“The second game of the year (Concord Cox Mill), we tied 1-1 in which we gave up a corner. The fourth game of the year we had some people who missed a previous practice and we had to start some non-starters. And we gave up a goal early and lost 1-0 to Northwest Guilford. So, we were close. All but two or three games this year that we either lost or tied, we were close.”
The Titans had trouble scoring throughout the season. In 24 games they scored 45 goals and gave up 35. That didn’t leave much margin for error.
And with those 45 goals goals scored, West outscored Davie County 11-1 in two games, 9-4 against Parkland in two games, and 7-2 against Glenn in two games.
“We created a lot of opportunities early on, but our finishing was subpar,” Williams said. “After, I think half or a little later half of the year, things started clicking a little bit more and we started finishing a little bit better. So, we constantly tried to switch a few things and players and positions, just putting people in the best spots. I think before the final week we were doing much better.”
As for the defense, it was solid for most of the season. Williams said he utilized a 3-4-1-2 system.
“We gave up some stuff that was uncharacteristic,” he said. “And it took us a while to shore up some things. We had some injuries that people played through throughout the year defensively who were some of our better players, but they just weren’t at 100 percent. And so, I think that affected us.”
Even the season just finished, it’s never too early start thinking about next season. Although six players are seniors, the future looks bright for the Titans. The top three scorers this past season are all sophomores — Abiel Lopez (15), Haegen Paschold (11), and Josh Medel (4).
“I like the way our team is set up for the future,” Williams said.