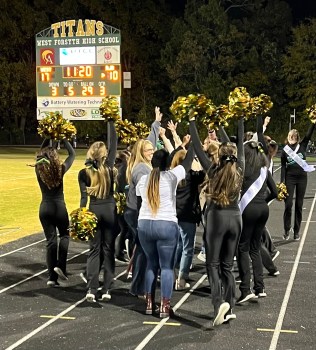 Marc Pruitt photo Lori Crump (center, gray shirt with hand in the air) joins the Titanides during "Go-Go" during the football game with Reynolds 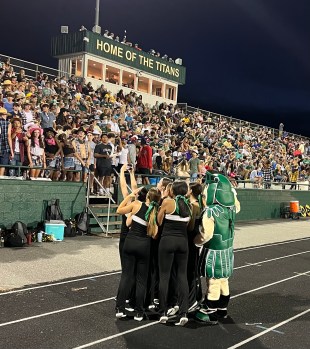 Marc Pruitt photo The Titanides snap a selfie (ussie?) with the Titan during last Friday's game 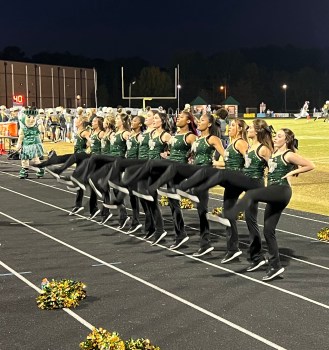 Lori Crump, a former Titanide, is in her first year leading the dance team at West Forsyth

Lori Crump is back where she belongs.
She had no doubt that one day, she would return to her high school alma mater to coach the Titanides, the West Forsyth dance team.
She told her former coach as much during her senior year.
“I was a teacher cadet during my senior year, and I helped Sara Crater, who was my coach for three years when I was here,” said Crump, who graduated from West in 2008. “I told her when I graduated that ‘I don’t know when and I don’t know how, but one day, I will lead this program.’ I’ve just always had that pull to be here.”
Crump got that opportunity in the spring when Crater announced she was leaving her position after 20 years.
“I was hearing rumors that it might be happening and so I kept checking the job vacancies on the WS/FCS website and one day, it popped up,” Crump said. “So, I sent an email to Mr. Spainhour (the West Forsyth principal) and the rest is history.”
Crump never really left West Forsyth. She tried to remain active from the outside as much as she could, including helping out when she was home from college, to helping with auditions for new team members every spring for 13 years, even when she had teaching stints at Mount Tabor and then Davie County.
“I’ll be honest, sometimes, during our bye weeks during football season, I would come here and watch the West games,” Crump said with a laugh. “I’ve just always had that kind of connection here.”
Crump was a Titanide all four years of her high school career. She was the captain her senior year, when she and two of her teammates created and choreographed a new dance that the team has used since.
“It was after a game and we were having a sleepover and listening to the song, ‘Come on over’ by Christina Aguilera, which was a really popular song at the time,” Crump said. “So, we created a dance, and we named it ‘Come on over’ and showed it to Ms. Crater and she really liked it and asked us to teach it to the rest of the team.”
Crump can vividly recall details of her tryout as one of several eighth graders who arrived to audition together, hoping for a spot on the team as freshmen.
“I started dancing when I was 4 and I don’t think I’ve ever been as nervous as when I came here to tryout,” Crump said. “Luckily, there was a group of us who all knew each other and as it turned out, I was one of nine freshman to make the team. It was very intimidating because we all had to audition in the gym. We didn’t have the space that we do now.”
The Anderson Performing Arts Center, which has its own private dance studio, was finished during her junior year.
“The space we have now is a lot more intimate and not nearly as intimidating,” Crump said with a laugh. “But you can still tell who the eighth graders are because they get nervous. Hey, I was once in their shoes and I just let them know that everything will be alright, try to keep them positive. It’s hard enough to remember what you are trying to do and then to see five adults with pencils sitting across from you. I want them to feel comfortable.”
Crump has 13 members on the team this year. With football season now over, they are gearing up for basketball season. The team plans to take a little break in March and April before ramping back up with tryouts in May, then summer practices and attending a team camp.
“Football is always a lot of fun and that’s how I remember my Friday nights when I was on the team,” Crump said. “That first game you are kind of nervous because you think you are ready and then you see all those people watching you and you’re thinking, ‘please don’t mess up, please don’t mess up’ but it got easier every year for me.”
Crump said that most of the dances the team performs are the same ones she danced to when she was on the team. Her favorite is one called “Go-Go,” which she even participated in on Senior Night during the football game against Reynolds.
“One of the traditions we have had as long as I’ve been a part of it is that they always invite past members of the team to come and perform Go-Go during the game,” Crump said. “I’m not one of those women who want to relive their glory days of high school, but the girls did ask me to perform with them. It was a lot of fun to perform that with them.”
There were several other former Titanides that joined Crump that night in the performance, smiling and laughing, and maybe even breathing a little heavier once it was over.
“It’s really awesome to be able to come to work and love your job,” Crump said. “I’m so appreciative that these kids want to work hard and be the best that they can be and that they work hard for me. They have adapted very well and have jumped on board with everything we’re doing. I have such wonderful memories of team dinners, ball games and gaining lifelong friends. I just hope that I can provide that opportunity for these girls.”