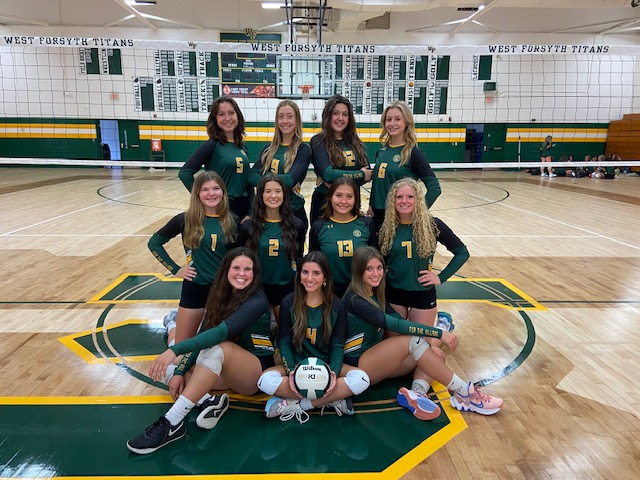 The season for the West Forsyth girls volleyball team ended a month ago, but there are still lessons to be learned.
West Forsyth improved throughout the season and finished 18-10 overall and 9-5 in the Central Piedmont 4-A, avenging earlier losses to conference foes East Forsyth and Davie County.
West Forsyth, which finished tied for third in the conference with Davie County, reached the conference-tournament final, losing 3-0 to Reagan, which finished 36-1.
“I felt like it went well,” Coach Lauren Gillon said. “It’s always hard coming off of a championship season no matter what level you’re at, what sport it is. It’s just hard to come off of a season where you won the (conference) tournament and the regular season.
“So, losing the pieces that we lost from last season I thought the team rebounded really well, and finished and accomplished what I thought they (could) accomplish. So, overall, I was happy with how we ended in terms of accomplishing our goals that we had set for the season.”
Last season, West Forsyth finished 21-7 overall and tied for first in the conference with Davie County at 12-2. West Forsyth defeated East Forsyth 3-0 in the conference-tournament championship and made it to the second round of the NCHSAA Class 4-A tournament, losing 3-2 at Western Guilford. However, West Forsyth lost three seniors, including Clara LaRue, who is now playing at Elon.
“The past couple years, I think we’ve been building — culture’s a buzzword — but building a really good culture from within the program,” Gillon said. “And I think we really come up with what it means to play for West Forsyth volleyball. And I think by establishing that, that has allowed us to get the most out of the athletes that we have.”
The Titans finished 12-15 overall and 6-4 in the Central Piedmont 4-A in 2018, but since then they have finished 24-5, 5-5 during the shortened season in 2020 because of COVID-19, and 18-10 this past season.
“I think the girls that make it through the program, or make it a part of the team, they know what’s expected of them,” Gillon said. “And so that kind of has trickled down over the past couple years, and it’s a mindset that we’re going to compete as hard as we can and get the most out of ourselves and our teammates that we can.”
West Forsyth started the season by winning three of its first five matches, then reeled off five straight wins before losing in straight sets at Reagan on Sept. 8.
“Reagan was for sure a powerhouse and they, I think, returned the majority, if not all of team that they had last year,” Gillon said. “So, that alone, you can’t replicate that in a gym. The team chemistry that that team had and that they were able to build upon from the previous year. That’s one of the key ingredients, I think, to winning.
“It’s a rival game, for sure, but I think that they were very clearly the best team in the conference.”
The Titans lost again five days later at home to Davie County 3-2. West Forsyth won three straight matches before losing 3-1 on Sept. 20 at East Forsyth. After defeating Mount Tabor 3-0 on Sept. 22 it lost four days later to Northern Guilford 3-1. However, it rebounded and won four of the next five matches, losing only to Reagan.
“I’d say over the past couple years we’re just seeing this higher caliber of players across all the schools in the top half of the conference, which I appreciate,” Gillon said. “I enjoy that. Who wants to play a season where you go win every game? I appreciate having the competition and not really knowing who’s going to be coming come out on top at the very end. So, I think it’s a really good thing for our area.”
East Forsyth defeated West Forsyth 3-0 in the final game of the regular season and the conference tournament began four days later. West Forsyth defeated Mount Tabor 3-0 in the first round, and then it avenged the loss to East Forsyth five days earlier with a 3-1 win in the semifinals. However, Reagan won the championship 3-0.
“Nobody wants to lose, but I think that they, because there’s club volleyball in the area, there’s so many girls that are friends,” Gillon said. “And they just have the camaraderie with each other, so I know a handful of my players were very happy for their friends that were able to experience that because we were able to experience it last year.”
West Forsyth was announced the next day as the No. 19 seed for the NCHSAA Class 4-A tournament and would have to travel two days later to Concord to play No. 14 Cox Mil in the first round.
Cox Mill won 25-23, 25-17, 25-19, ending West Forsyth’s season.
“We were up a handful of points, I believe, in at least two of the three sets,” Gillon said. “So, I think overall it just kind of came down to the ability to stay consistent with that level of play, and Cox Mill was able to be a little bit more consistent of that higher level than we were.”