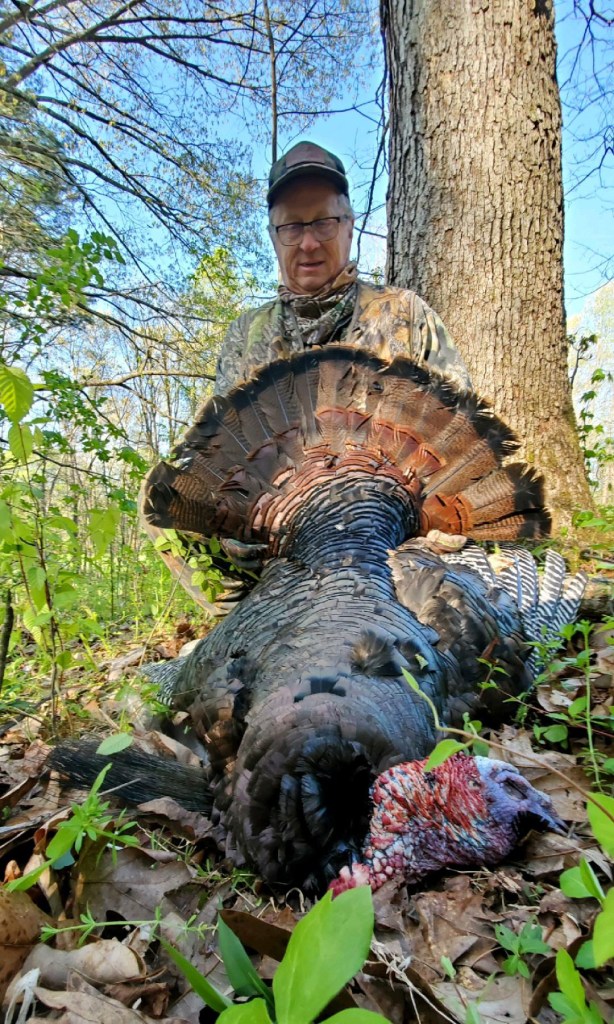 Yes, today is Thanksgiving, and the minds of most hunters in North Carolina are squarely focused on white-tailed deer, maybe a few on ducks and small game.

But in an hour or so from now, I’ll be called upon to slice the turkey into bite-sized and above pieces. Meanwhile, I’m thinking about a big gobbler, parts of which are still in the freezer downstairs, waiting to be sliced up and fried as Gobbler McNuggets at a future event.

And the fact that I live and breathe turkey hunting most of the year — even when I’m fishing, duck hunting and deer hunting — has almost nothing to do with it.

Senior-citizen status was bestowed on me about a year ago, and a certain amount of reflection being allowed when you pass into those golden years, I have been thinking about great days afield — a lot.

Where I hunted growing up in the mountains of Virginia’s Shenandoah County, we had plenty of turkeys, but the spring season really didn’t grab my attention. There was baseball and golf to be played at relatively high levels, so putting on full camouflage and driving 90 minutes to our hunting land, arriving at 6 a.m. on a Saturday morning, was not on my radar.

Then, Carl Tacy appeared. The Wake Forest basketball coach was an outdoorsman from West Virginia. Working for a Winston-Salem newspaper, I interacted with him regularly. I remember showing him a photograph of a stringer of nice rainbow and brook trout I caught in early May 1984, and he pulled from the drawer of his desk a photo of him with a big turkey gobbler.

He took me hunting to his land in Virginia two or three times over the next 5 or 6 years, but the turkey-hunting bug didn’t bite hard until 1990. Slated to go with Taz, a new hunting buddy, one morning in late April, my wife tapped me on the shoulder and informed me that our daughter was on the way — and almost here. I had to call and cancel, and my buddy celebrated my absence and my daughter’s birth the next morning, with a nice Alleghany County bird. When he took me a week later, birds gobbled everywhere, all morning.

I was hooked. My buddy and I came up with another lease in Alleghany County, and I got to return the favor and take Coach Tacy a couple of times.

As it turned out, my love of turkey hunting developed about the same time North Carolina was really developing its statewide turkey flock. In 1970, when the N.C. Wildlife Resources Commission started to try and bolster the flock; it was estimated that only 2,000 birds existed in North Carolina’s 100 counties. In 1977, when the state started to track its spring-season harvest, hunters reported taking 144 birds.

Biologists Wayne Bailey, Brian Hyder and Mike Seamster got down to business trapping birds and moving them to places that hadn’t had turkeys in decades. Seamster really kicked the restocking program into high gear, with $600,000 from the commission and more than $300,000 from the National Wild Turkey Federation. He oversaw the trapping and relocation of more than 4,400 turkeys across North Carolina, plus another 1,744 birds acquired from other states. Once, North Carolina traded river otters to Wisconsin for turkeys. They also got turkeys from Alabama, Arkansas, Connecticut, Iowa, Michigan, Pennsylvania, South Carolina and Virginia.

In 2015, the commission reported a statewide flock of 265,000 turkeys, with open seasons in all 100 counties. Two seasons ago, hunters killed more than 23,000 turkeys during the spring season, a record, with a handful of counties reporting harvests in excess of 500 birds — a stark contrast to the statewide harvest 45 years ago.

I remember a few special birds. There was Gargling George, a 20-pounder from Alleghany County with a peculiar, throaty gobble. Taz killed him one rainy morning after we’d spent 3 or 4 days really concentrating on him; Coach Tacy and I had him within 60 yards, behind a screen of mountain laurel, for more than an hour one morning.

I remember the first bird I called in and killed, at 13 yards, in Wilkes County. I can still see the sheen on the feathers of a huge Stokes County gobbler I called in for my son, Andrew, one Youth Day, the Saturday before the season opened. He was within 15 yards for what seemed like an hour, behind us as we crouched behind the above-ground part of a root cellar, stuck looking in the wrong direction. Andrew never killed him, but he killed a bird on opening day a year later, the first one I called in using a decoy.

I remember a big Stokes County bird I didn’t kill because he came around a corner and caught me trying to sit down and hide, and another Stokes County bird that found my decoy repugnant and took off just out of range. I remember another one in Forsyth County I killed after Taz and I saw him in a wheat field while we were riding to another part of a farm to set up. I rolled out the passenger door of the truck, crawled into a creek ditch and called him up 10 minutes later. He weighed 19 pounds.

I remember more birds that I should have killed that got away than birds I didn’t deserve but killed anyway — kamikaze gobblers, so to speak. One was a Yadkin County bird, 22 pounds, 6 ounces, that I killed exactly 5 minutes after I closed the door to my truck; I was kneeling down, tying my boot laces, when he gobbled, 100 yards away, at a passing Canada goose.

A fishing-guide buddy, Rob called in a South Carolina Lowcountry longbeard for me a handful of years ago. My first shot dropped him, graveyard dead, in an old bean field. But moments later, the dead arose and started to run off. I missed him two times, my shot splattering mud all over him. Rob emptied his shotgun at him, with the same result. I found him about 15 minutes later. He’d run into a stand of pines, into a patch of briars, and died there, wings spread.

I killed another Forsyth County giant we’d seen in trail-camera photos and nicknamed Foo Man Choo because of a beard that split and hung down in two strands. He weighed 22-5, and when I was running to him, flopping on the ground, an even bigger beard standing 20 yards away, out of my line of sight, flew away. I watched Andrew kill him the next opening day, at 50 yards, with some TSS shells he’d loaded himself. He weighed 24-12, and I picked him up from the taxidermist a few months ago when Andrew was working and couldn’t get away.

I have been hunting for roughly 30 years. I’ve killed roughly 20 wild turkeys, and I hope in my remaining years, I get to kneel down beside many more gobblers and admire their gorgeous plumage and stroke their beards in wonder.

And, especially, run a carving knife through one’s breast.