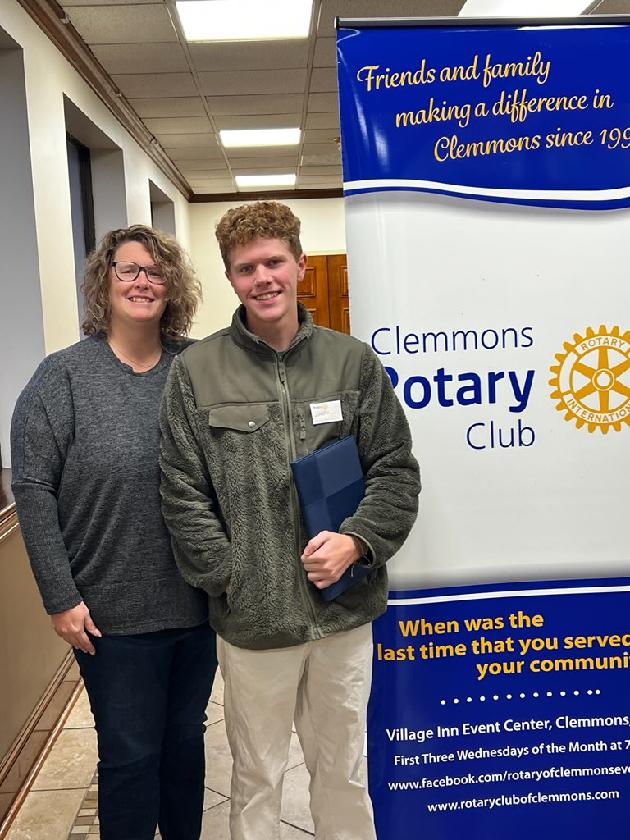 Xander Patton was recognized on Nov. 16 as the Rotary Club of Clemmons Student of the Month for November.
Patton is an excellent student with a GPA of 4.61 and ranks second in the Class of 2023, which has 567 students.

Patton has completed the finance academy requirements — four units and an internship and received NAFTrack Certification (National Academy Foundation). His internship was completed by working at Heidi’s Uniforms where he interacted with and learned the roles of various departments within the company.

He completed a 20-plus page research paper and presentation on biochemical characterizations at North Carolina School of Science and Mathematics Summer Ventures program.

Patton is a member of West Forsyth High School Marching Band and leads the band as the drum major and according to the school, “Xander has shown exceptional commitment to the music program at West.”

Volunteering his time for school and community projects is also important to Patton.

In addition to his academics and various volunteer activities, Patton is also a member of the Boy Scouts of America where he is an Eagle Scout, Senior Patrol Leader, and Order of the Arrow.
He has participated in the Philmont, which consists of approximately 80 miles of backpacking over 11 days and high adventure sailing over seven days in the Bahamas. He has received National Youth Leadership Training and is also a squadron guide. He was presented his Eagle Scout Award for a project completed at Merriwood Christian Camp.

Patton is considering several colleges, with his first preference being Vanderbilt University to study biomedical engineering. In addition, he hopes to continue his interest in music and band participation.

The Rotary Club of Clemmons congratulates Patton for his accomplishments and contributions to his school and community.