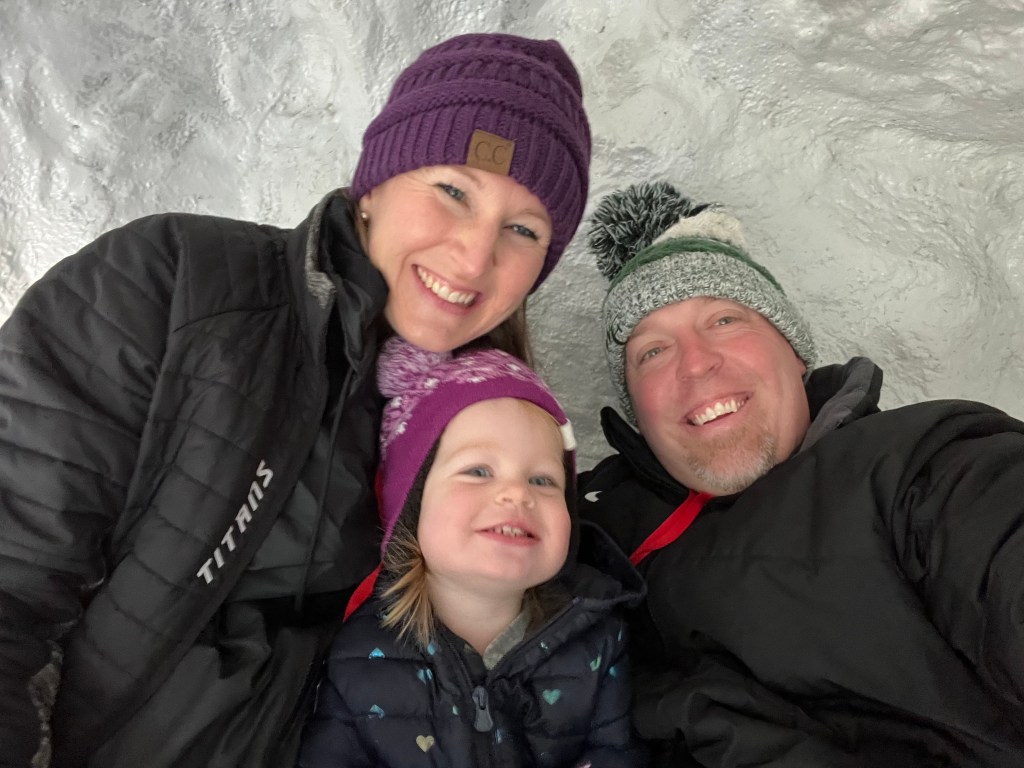 Jeffrey Williams with his wife, Sharon, and daughter, Hannah Mae

Jeffrey Williams grew up in northern Stokes County as the youngest of two children. Having a mother who was a respected teacher in the community, Williams saw the impact good coaches and mentors made from an early age. Like his older sister, Williams took to sports quite naturally. “I always was playing something,” Williams said.
“Whether it was baseball, soccer or basketball. For the longest time, my mom wanted me to stay out of football. Finally in middle school she relented.”
Williams had been recruited to play quarterback and safety. However, during the last game of his eighth grade season, Williams broke his collarbone.
“I convinced my mom that it was just a fluke and played the next season,” Williams said. Unfortunately, Williams ended up breaking his leg while playing football and had to have three surgeries from the complications. Subsequently, he spent time in a wheelchair and a walking boot for three months.

Williams heeded his mom’s warning about not returning to the sport after his recovery. He resumed playing other sports like baseball and basketball at North Stokes High School. Williams also gave cross country a try. Finishing in the top three on his team, Williams enjoyed the conditioning from the sport that helped him prepare for baseball and basketball seasons.
“I did struggle a bit until we received the diagnosis for asthma. I had thrown up every time I hit mile two and just couldn’t figure out why,” Williams said.
“It was a lot more manageable once I knew what was going on. Not too long after that, I had to have the final surgery on my leg because the screws had gotten infected internally. I was determined to still run up until that point to help my team though. The doctors assured me it wouldn’t do any harm to my leg.”

As Williams’ high school career was coming to an end as a senior, he had considered playing sports at smaller schools in college. “I came from a family with a history of loving the University of North Carolina at Chapel Hill (UNC),” explains Williams.
“My sister was already there, and I figured I could try out for club sports.” Williams went to tryouts for junior varsity basketball and re-injured his bad leg.
“My ankle was in bad shape, and I had to get on crutches. I decided to redirect my passion for sports and applied for UNC’s football manager position that I had read about in the paper,” Williams said.
Williams was selected for the position and remained in it all four years of his college experience. “I served in that role from 2-8 p.m. every single day, which was usually at least six days a week. It was worth it though because I earned similar perks that the athletes got. Some of those included signing up early for classes, meals, apparel, academic support if needed and traveling to new places to see the games. Going to places like Miami and Notre Dame were a lot of fun,” Williams said.
“I made some lifelong friends, many of whom stayed in the football world. One of my good buddies is the offensive coordinator for the Detroit Lions.”

Williams’ position was very complementary to his minor, too.
“I can say that I’m one of the few people who actually uses every single day what I went to college for,” Williams said with a laugh. “I chose math as my major, and my minor was exercise sport science. It was basically a coaching minor. One of the classes I took was very valuable because it was broken into three different sports. Various assistant coaches at UNC would teach us how to coach their sport. They emphasized coaching points, required us to develop practice plans, and had us coach teams in the area. It was a fun experience.”

After graduating from UNC in 2009, Williams immediately earned his master of education at Wake Forest University. With the majority of Williams’ peers in his class having graduated from UNC, they bonded pretty quickly.
“A friend of mine and I were deciding where to student teach. There was an opening at Parkland and one at West Forsyth High School. The decision for us was made on a coin flip and I ended up at West Forsyth,” Williams said.
“One of my best friends, who had been Rameses (the UNC mascot), had become a student teacher for Scott Bilton. I would visit my friend and got to know Scott.”
Knowing Williams’ background, Bilton asked for his help with the West Forsyth soccer teams. “I had accepted a teaching position in math at West Forsyth in 2010 and have been there ever since,” Williams said.
It didn’t take long before Williams was placed in various coaching roles as well at West Forsyth. He has been an assistant coach for the boys basketball team, girls soccer team and boys soccer team. Williams has also been the assistant athletic director and now is the head boys soccer coach.

In one year, West Forsyth made the playoffs when Williams was the head coach for boys soccer, and an assistant for boys basketball and girls soccer when they secured the state championship. “It was an exciting time, that’s for sure. I also got married to my wife, Sharon who I met through mutual friends in 2018,” Williams said.

Williams’ personal and professional life were flourishing. A year after the numerous playoff appearances and girls soccer state championship, Williams was awarded the “Teacher of the Year Award” for his commitment to mathematics and students at West Forsyth in 2019. “I always knew that I wanted to make a difference in kids’ lives. I am grateful to those who took the time to do that in mine,” Williams said.

Williams gained a new appreciation for impacting children when he and Sharon welcomed Hannah Mae on Jan. 20, 2021. Williams scaled back his coaching duties once he welcomed his first daughter. “I still coach the boys soccer team,” notes Williams. “Coaching is a passion of mine. I want to make sure I’m still there for my daughter as much as possible, so it has been a good balance.”
Williams will continue to maneuver the balancing act as he and Sharon are welcoming their second daughter, Sophie. “I’m surrounded by girls,” Williams said with a laugh. “With Sharon, Hannah Mae, our two senior dogs and now Sophie, I’m outnumbered. But I love it, and I couldn’t feel luckier.”

Outside of coaching, teaching and being a family man, Williams tries to share his faith. Having participated in Fellowship for Christian athletes at West Forsyth, Williams has been active in his church too. “I’ve always enjoyed being a community group leader in my church. It’s something I’ve been involved in for quite some time, including college,” Williams said. “Luckily our community has so many great ways to give back and serve.”