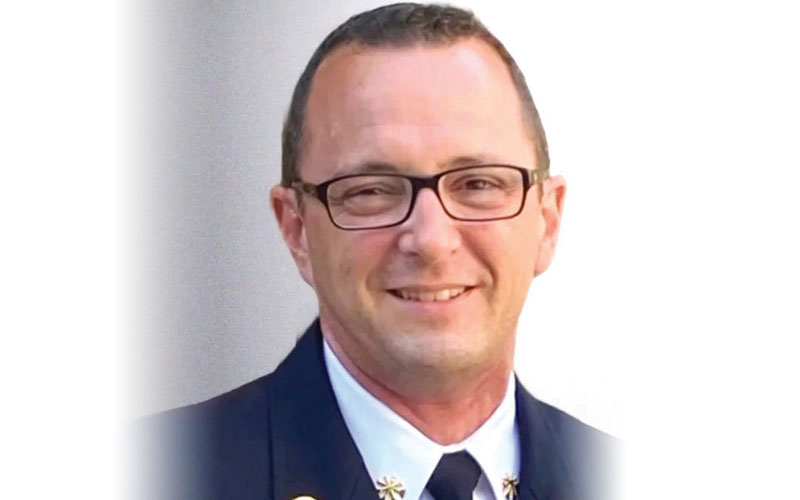 Styers, who has 26 years of experience in fire safety, will begin his new duties in Jan. 2023

Gary Styers recognizes that he has some big shoes to fill.
He said that he’s also up for the challenge.
Styers was named as the new chief of the Clemmons Fire Department last week after unanimous approval from the Clemmons Fire Board of Directors, which fielded 37 applications for the position.
He will begin his new responsibilities in early January 2023 and step into the role held by Chief Jerry Brooks for the last 43 years. Brooks is retiring in December after dedicating 51 years of  firefighting service to the Clemmons community.
Styers is currently the deputy chief/fire marshal for Forsyth County Emergency Services and is also a volunteer firefighter for the Clemmons Fire Department. He brings with him 26 years of experience in a variety of roles in numerous fire departments in the state.
“Chief Brooks has dedicated his life to the Clemmons area, and I know that I have some big, big shoes to fill,” Styers said. “And in my current role, I have already forged that relationship with him, and I know I can count on him for advice when I need it to make this transition as smooth as possible. He has set the standard for dedication, leadership and service in this community and with the relationship that we already have, I know that I can call on him anytime I may need his help.”
Styers said that one of the main draws in applying for the position is that he and his wife, Kim, and their daughter, a sophomore at West Forsyth, have lived in Clemmons since moving here from Statesville in 2017, where he served as the interim fire chief for three years (2014-2017).
“This is the community we chose to live in when we moved back to this area a few years ago,” Styers said. “That was a big drawing card for me. Getting to serve the community my family and I live in is a tremendous opportunity.”
Styers has always been around firefighters. He had an uncle start a volunteer fire department in Forsyth County when he was younger, and his father was also a volunteer firefighter.
He also eventually became a volunteer firefighter and said that when he graduated from high school, he knew he had to start making some decisions.
“I really enjoyed being a volunteer firefighter and had a lot of fun doing it, so I figured, why not try to get paid to do it?” Styers said with a laugh.
He began his career in 1996 as a firefighter in the Kernersville Fire Department.
Along the way, he has held roles as a fire suppression officer in the Forsyth County Fire Department (1997-2002), fire investigator for the Charlotte Fire Department (2002-2005), canine handler for the Bureau of Alcohol, Tobacco and Firearms (ATF, 2004-2009) before landing in Mooresville in 2005 as the fire marshal and then Statesville in 2014.
Since 1995, Styers has also been a fire service instructor for various community colleges in the state.
He earned his associate’s degree in fire protection technology from Guilford Tech in 1997, received his bachelor’s degree in public safety administration from Charter Oak State College in 2006, and his master’s degree in public administration with a concentration in emergency management from the University of North Carolina—Pembroke in 2012.
His volunteer/combination fire services include:
• Firefighter, Clemmons Fire Department, 2017-current
• Assistant fire chief, South Iredell Fire Department, 2007-2017
• Firefighter, Shepherds Fire Department, 2006-2007
• Captain, East Lincoln Fire Department, 2003-2006
• Captain, Lewisville Fire Department, 1998-2003 Lieutenant, City View Fire Department, 1992-1999

“At every stop of my career, I have learned something that has prepared me for this role,” Styers said. “I saw a tremendous amount of growth in the department when I was in Mooresville, and while I was in Statesville, the budgets were really tight, and you really had to be creative and figure things out. Growing into this career has been very rewarding to me. Taking on new positions in different locations and working through every career advancement has definitely helped prepare me for this role as chief.”
As a current volunteer firefighter in Clemmons, Styers said that will also be helpful in the early stages of the transition.
“I know all the Clemmons employees by name already because of my current role with the county and my volunteer role,” Styers said. “It’s never a bad thing to have those relationships already. So, you get to start off on the right foot in that aspect of it and the goal is to now build even better relationships with them as you keep moving along in the journey. And that also goes for the community, too. I want to be active in community events and functions as I know that Chief Brooks was, too.”
Styers said that receiving the news last week was both exciting and bittersweet.
“I really have enjoyed doing what I’ve been doing in Forsyth County, and I value the people that I work with,” he said. “When you love what you do and are surrounded by great people, it’s hard to leave that behind. It’s a big ol’ bag of mixed emotions. But I know that the opportunity in Clemmons is the same situation. There are a lot of great people that I’ll be working with and I’m looking forward to the opportunity.”