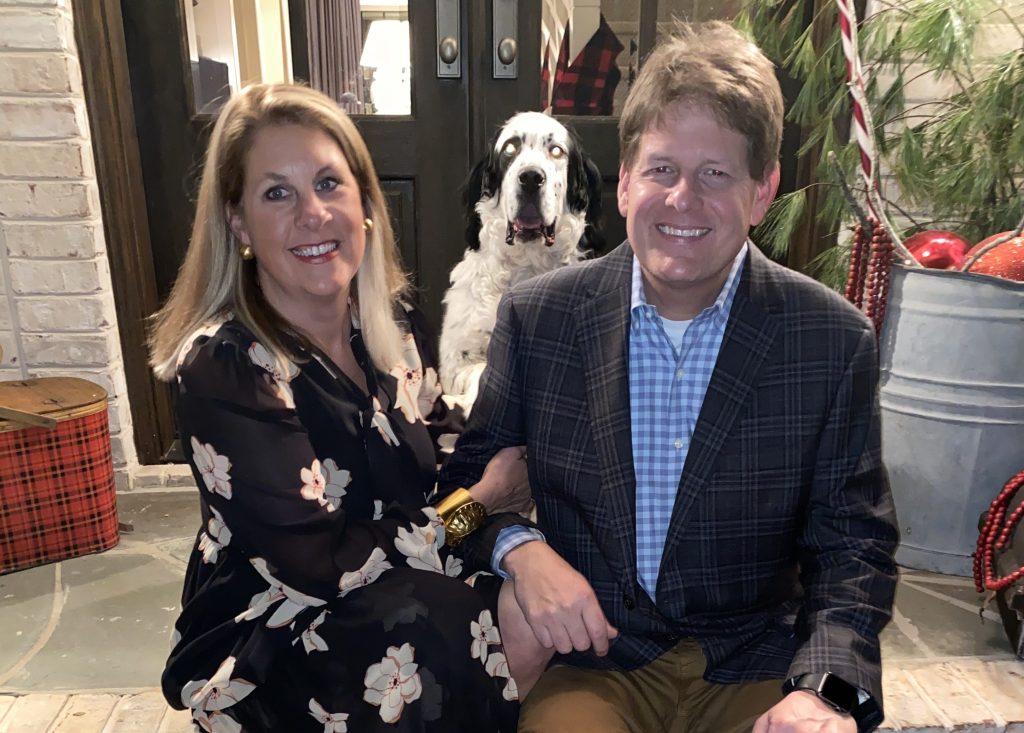 Davin Brown with his wife, Megan, and their dog, Otis

Davin Brown grew up in Mocksville as the middle child of three siblings. One of the special components of the Brown family is that they not only played together but they worked together. “Probably as early as 12 years old I worked at my grandfather’s store, Hendrick’s Furniture. At first it was just lawn care, but I remember being around him and my father, and learning about the business early on,” Brown said. “Later when I was in high school, I worked in the warehouse more, and continued gaining valuable knowledge.”

The close-knit family experienced a tremendous loss when Brown was in high school. “My brother was killed in a car accident in high school,” Brown said.
Mourning the loss of his brother also affirmed Brown wanting to eventually come back home and work in the family business after college. Brown decided to go close to home and attended Western Carolina University in Cullowhee.
“I had been told since I was kid that I would take over my grandfather’s business so earning a degree in business management seemed like a logical step,” Brown said.

After four years at Western, Brown headed back home to start working at Hendrick’s Furniture. “Within the first year, my grandfather sold the business to my uncle who owned Boyles Furniture and Rugs. Although I had thought I would take it over, at that time I wasn’t quite at the phase of life where running my own furniture business made sense,” Brown said. “So, I went to work for my uncle at Boyles after that for the next 12 years.”

After Brown moved back home, he had also reconnected with his future wife, Megan, when he was 25 years old. “We had known each other and ran back into each other,” Brown said.
Sharing a passion for the furniture industry, Megan with interior design, and Brown for the business side of it, made their connection and interests very similar.
“In 2005 we started talking about opening our own store. We had identified a lot of brands that weren’t being carried in stores and thought we could do well with younger customers. We wanted to provide a better value than Pottery Barn that also provided local service. Boyles had started to go out of business slowly, and we decided to make the leap of faith,” Brown said. In 2005, Meg Brown Home Furnishings began.
“We had made other big changes in our life at that time too. Not too long after the store opening, Megan found out she was pregnant again. Andrew (18) was 2 at that time, and we were going to be expecting Adam (16). “It cut down on her time in the store, but we still collaborated on it,” Brown said.

“Being a parent is a lot like the furniture business. You learn as you go,” Brown said with a laugh. Now the father of a college-aged child, and owner of a store that spans over 15,000 square feet, Brown appreciates the support of the community. “We’ve been fortunate to have great customers and support from our community. That means a lot to us. We’ve tried to really listen and identify the needs of our customers which is why we have opened the sleep shop and the outlet to provide a variety of choices.
“We also have experienced designers that can help people make their choices and customize selections based on their needs.”
Another element to their store is that they support and offer a wide variety of North Carolina based vendors.

“My grandfather always told me that hard work pays off,” Brown said. “I am grateful that the lessons I learned from my grandfather, father and uncle helped us find a way to raise our own family in a community that has given us so much.”