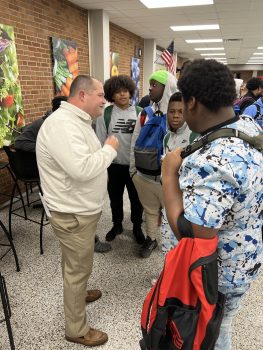 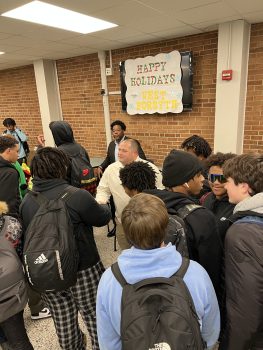 Marc Pruitt photo Kevin Wallace greets some of his new players on the West Forsyth football team Wednesday afternoon in the school cafeteria. 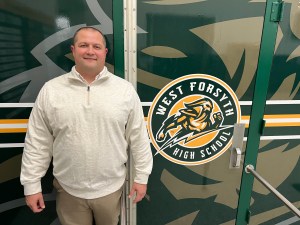 Kevin Wallace is trading in his red and black for West Forsyth green and gold.
Wallace, who spent the last six seasons as the coach at Northwest Guilford, was introduced as the new head football coach at West on Wednesday in the school cafeteria in front of his future players, school administration and members of the football coaching staff.
The group listened intently as Wallace shared some of his background. This is his second job as a head coach after previous coaching stops as an assistant at Apprentice School (Newport News, Virginia), Frostburg State (Frostburg, Maryland) and LaSalle University (Philadelphia, Pennsylvania), where he also played offensive line for the Explorers before graduating in 2008. Wallace served in several roles at Greensboro College from 2011-2015, including offensive coordinator, strength coach and offensive line coach. His teams at Greensboro College set 78 individual and team offensive records, and his passing attack was one of the top DIII passing offenses in the country. He also served two years as the offensive coordinator at Glenn for the 2015 and 2016 seasons. The quarterback those two seasons ended up throwing for 6,212 yards and 75 touchdowns during his career.
Wallace led Northwest, which averaged 40 points per game this season, to a 10-3 record this season and a trip to the third round of the NCHSAA 4-A state playoffs.
He went 32-34 overall during his six years with the Vikings.
But Wallace said that of all his previous climbs up the coaching ladder, his one-month stint as the offensive coordinator at West Forsyth in 2017 may have had the greatest impact on him.
It’s one reason the job appealed to him when learned about Adrian Snow’s resignation last month following 15 seasons and 121 wins.
“My experience here in 2017 was really great and it definitely helped draw me back. From someone I worked with for the shortest amount of time, I think I may have learned the most from him (Snow),” Wallace said. “Every coach has those four or five jobs that if they ever open up, you’ve got to go after them. West Forsyth has always been one of those jobs for me and I had to go after it. It’s got everything you look for. Administration-wise, community-wise, people-wise — everyone that’s here was just awesome. There’s a lot of excitement across the board here about football in Clemmons and about people caring and developing young men and women.”
That being said, the conversation Wallace had with his players at Northwest on Monday afternoon was a tough one.
“That’s the first time I’ve had to do that as a head coach,” Wallace said. “One of my assistants told me that it must feel like you’re swallowing vinegar. I will always have a lot of memories there. There are a lot of kids that sold out for the program, sold out for me, did everything I asked of them. It’s a hard thing to have to do. But ultimately, at the end of the day, I feel like my decision is ‘selfish’ quote, unquote, but I feel like this is where I want to be, and this is where I need to be. That being said, it was really hard to step away from those 100 kids.”
His new players will call him “Coach.” They can also call him “Doctor.” He recently wrapped up his doctorate degree in kinesiology from UNC-Greensboro, to also go along with his master’s degree from Frostburg State. He is also a USA Weightlifting Level-1 coach.

Kevin Spainhour, the principal at West Forsyth, said that Wallace’s energy and passion stood out during the interview process.
“The passion, the knowledge — he has been at all the different coaching levels, and it showed,” Spainhour said. “We were looking for someone to give us a shot in the arm, an offensive mind, and someone who has a dedication and commitment to the whole player, not just on the football field. Kevin fits right in with our philosophy at West Forsyth. He’s someone who’s really going to dig in and get kids prepared for college and the next level, ensuring that they become good men. With him being here previously and knowing a lot of our current staff, that was another big positive. We’re excited to have him here. We also let him know we don’t expect him to be Adrian Snow. We want him stand on his own two feet and put his stamp on the program.”
Wallace said that his familiarity with several of the current members of the coaching staff was also appealing about the job.
“I have a great relationship with about half of them already,” Wallace said. “They were here when I was here before. And the ones I didn’t already know then, I’ve gotten to know them when we came here for 7 on 7s in the summers. I’ve got a good comfort level with them already and that’s going to go a long way. Yes, there are a couple of guys I may bring with me, but I want to keep the staff intact as much as possible, but sprinkle in a little salt and pepper here and there for something different.”
Wallace said being a head coach for the first time at Northwest gave him a chance to learn how to adjust to that role.
“I was thrown into it six years ago and when I took that job during the summer,” Wallace said. “I had just gotten married; I was leaving for my honeymoon and accepted the position over email during my honeymoon. I didn’t get to have much of an offseason with the team that first year, so I’m glad to have that opportunity with these guys.”
Wallace said he knows better how to prioritize now that he has six year of experience behind him.
“I was trying to do everything in one day the last time,” he said with a laugh. “That can really stress you out and overwhelm you. I learned how to interact with each kid, I learned how to interact with parents, with administration. I learned what to prioritize and how to implement it.”
Wallace will begin his official duties at West in mid-January. He and his wife, Kristi, and their 11-month-old son, Kameron, are getting away for a few days for the holidays.
“I’m excited to lay the new foundation for what our program will look like,” Wallace said. “That means getting our structure set up, letting them know how we are going to operate, laying out expectations and showing them how we are going to get there. Set those expectations and let them know how to reach them.”
As player after player made their way past Wallace to introduce themselves before heading home, the smile on the face of Wallace and the nervous looks on his future players said it all.“Once we really start getting into things, they’ll see and they’ll understand,” he said. “It’s easier to say it to them now but it’s harder to do because it’s new to them. I’m going to build on what they already know, just with maybe a little different philosophy. I’m excited. They seemed to be excited. I think they’ll see that we are going to play an exciting style of football.”