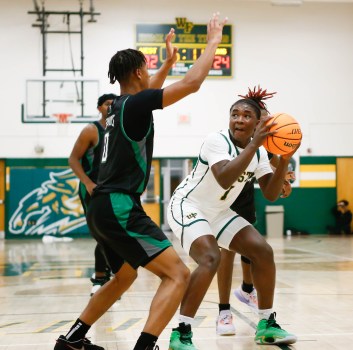 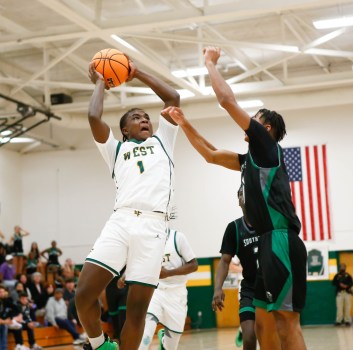 Leader is a word often thrown around with guards in basketball.
Sometimes it’s somewhat hyperbolic, but in the case of junior Cam White of West Forsyth, it’s an apt description.
At 5-foot-10, White is a shooting guard and, although being a guard on the court is important, he’s also important in bridging the gap between the new regime of Coach Marlon Brim and the old regime under Coach Kevin King.
Brim is in his first season as the head coach for the Titans after replacing King. And all the while, White is still adjusting to life in North Carolina after moving here before the last school year started from Indiana.
When Brim took over as the West Forsyth coach after leaving Atkins, he had a message for White.
“He said I need to get stronger, and I need to be a leader this year,” White said.
White took that message to heart.
“I knew he was going to have high expectations for everybody on this team, not just me,” he said.
Brim was named the head coach at West Forsyth in May, and the team had summer workouts.
“I saw the toughness in him, and I think he is a leader,” Brim said of White. “I think if you get kids out of that comfort zone, and if they haven’t been a leader, but you see some qualities in him. And I think you take that into consideration when you tell kids that they can be a leader.”
When practice started on Oct. 31, something in Brim switched.
“It was a different Coach Brim,” White said. “He was enthusiastic. With everything we gave, he always claps. He’s just loud. He loves it. You can tell he’s a real loving coach for the game of basketball.”
And one of the things that Brim wanted to instill in White and the rest of the team that finished 8-17 overall last season and 3-11 in the Central Piedmont 4-A was to have a short memory.
“I just think one of the things we talked about is not talk about last year,” Brim said. “Don’t mention last year. Let’s move forward from last year and let’s show people how much better we’ve gotten. So, I think that was the main thing that I told Cam — that nothing would be held against him from last year, but we’re not talking about last year.
“We’re not playing how we played last year. We’re not doing the things we did last year. So, everything is new and fresh. So, we need to play that way.”
White has taken that message to heart. White averaged 8.7 points per game, 3.3 assists per game and 3.3 rebounds per game in the first three games. He exceeded that last Friday against Mount Tabor by scoring 12 points.
“I think he’s gotten stronger. I think he’s gotten more athletic. I think he’s gotten more confidence. And I think that he really knows our expectations as a coaching staff and what we’re looking for,” Brim said. “He’s a tough guard. He can shoot it. He can handle it.”
Brim knows what he’s talking about because the point guard playing alongside White is Brim’s son, Jacari, a 6-1, 175-pound sophomore, who through the first three games was tied with senior A.J. Baskerville in points on the team at 16.3. Jacari played as a freshman last season with his father and was third on the team in points for the Camels at 12.2 per game.
“Jacari’s a leader,” White said. “I think his game reflects himself. He can go to the basket any time. He can go get his teammates open. He plays defense. Jacari’s a true point guard.”
Although Jacari Brim is leading, or is right at the top of almost every team category, it takes two guards to tango.
“That takes pressure off Jacari as an off-guard,” Marlon Brim said. “I think (Jacari’s) relationship with Cam, his relationship with Buddy (Bartlett), all the guards, all the players on the team, I think that’s a relationship that’s very strong.
“So, it made for an easy transition for me as a coach. And it made for an easy transition for Jacari to kind of fit in with those guys.”
It’s a team game, so when both guards play well, the rest of the team should feed off that.
“It helps a us a lot because when the backcourt is strong, I feel like the frontcourt is going to be even stronger because once the backcourt can get picks — that’s just drive and kick,” White said. “I feel like that can open up the game a lot more and you can get the big men involved, and everybody — all positions.”
The first game of the season with a 60-58 loss against Southwest Guilford. Then, West Forsyth defeated North Forsyth 69-27 and 69-26 in two games in five nights. The competition picked up in the loss at Mount Tabor.
“I feel like things are going good, but we still have a lot more work to do for the team that we want to be with the team that we said we were going to be,” White said. “
With just four games played through Monday, Tuesday’s scheduled home game against Parkland and the scheduled road game Friday night at Glenn are pivotal.
“I think it’s big for him to step up,” Marlon Brim said of White. “That way, he shows he’s a significant part of our growth and our team.”
Even though the final day of school before Christmas is Friday, the Titans are scheduled to play six games in two different tournaments including next week’s Frank Spencer Holiday Classic, scheduled Dec. 21-23.
“It’s just going to have to take trust and commitment,” White said. “I think those things can take us a really far.”