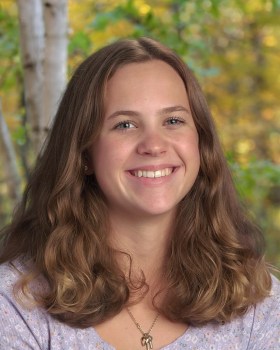 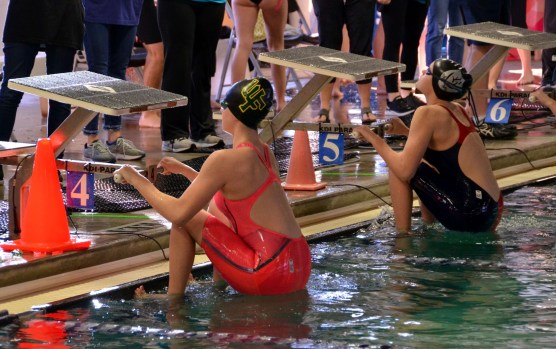 The West Forsyth girls swimming and diving team has a board outside the old gym with all the school records.
One of those records could be broken this season by sophomore Katherine Perdue, who is pushing to break to record set by Allie Warnimont in the 100-yard backstroke.
Perdue was striving toward that goal last season, her freshman year.
“I swam pretty well,” she said. “My (Central Piedmont 4-A) conference meet was a really good meet for me. I dropped a lot of time, and it was the first time I ever went under a minute in the 100 back, which is a big goal for me. And so, it was really cool to get it in a high school meet.”
But to get the school record in what she considers her best event would be special.
“That would be crazy, especially my sophomore year because I have two more years to improve it,” Perdue said. “It would just be really cool to have my name up on the sign at school.”
According to Coach Sandy Thomerson of the Titans, Sarah Frisbie was the last girls swimmer to break a school record, not counting the relays.
“Knowing the excitement they held for that (breaking the relay record) some individual events would be cool to see,” Thomerson said.
Perdue is a well-rounded swimmer, but Thomerson said that Perdue’s best chance of breaking the school record is in the 100 back.
“If she keeps working, if she keeps getting stronger, and she’ll keep getting faster,” Thomerson said.
If Perdue is to break Warnimont’s record she would add her name to the board because she was part of the 200-yard medley team that broke the school record set in 2016 during the conference meet last season. The other three swimmers included Audrey Frondoza, who is now a senior, Katie Kennedy, who was also a freshman with Perdue last season, and Kelly Smith, who has since graduated.
Unfortunately for the relay team, Frondoza false-started in the regional at the Greensboro Aquatic Center, and the team was disqualified, keeping the team from having a chance at qualifying for the NCHSAA Class 4-A state championship at the Triangle Aquatic Center in Cary.
“(Frondoza) was so upset. She felt bad for us,” Perdue said. “But it was like, ‘Don’t worry about it.’ I mean, it happens.”
Perdue’s swims year-round for Enfinity, her club team.
As far as West Forsyth goes, it has a mix of club swimmers from Enfinity and TYDE. That means that many of them don’t get a chance to practice with the school team during the season.
Instead, Perdue wakes up and goes to club practice from 5 a.m.-7 a.m., goes to school at 8:55, has weight training from 4:45 p.m.-6:15 p.m., does her school work after she gets home, goes to sleep about 9 p.m. and wakes up at 4:30 a.m. to do it all over again.
“At the beginning it was terrible,” Perdue said. “I was like, ‘I want to stay in bed all day.’ But as long as I make sure I go to bed early enough I’ve gotten to where it’s hard to get up at first, but you just get moving and it’s not that bad.”
Sometimes with swimming, there can be a chasm the size of the deep end of the pool between the part-time swimmers and the year-round swimmers. That’s not the case for the Titans.
“The girls stay pretty consistent from year-to-year, so they’ve built up a relationship and they all seem to get, whether they’re TYDE or Enfinity, there’s a special bond between those girls that I really enjoy watching them all together,” Thomerson said. “They swim on opposite teams year-round and they get to swim high school to merge a relay like they do they have a lot of fun with it.”
Perdue’s personality and likability has translated to her getting better results.
“She’s very well-rounded,” Thomerson said. “She obviously has events she’s stronger at, but she can swim anything. You can put her in and do well at it. She is a team player, she roots for her other teammates as well.
“Being as fast as she is she’s not arrogant or cocky about it. She doesn’t have that about her.”
West Forsyth had its first conference meet on Dec. 2 at Jerry Long YMCA in Clemmons against Mount Tabor and East Forsyth. It also has a meet on Thursday at Kernersville YMCA against Reagan and Reynolds. Winter break starts after school gets out on Friday, but West Forsyth will be competing in the Robert R. Sawyer Invitational next week at the Greensboro Aquatic Center.
“At first it was pretty natural,” Perdue said of her first experience as a swimmer in her youth. “I just loved being in the water just in general, so the more time I could spend in the water the better.
“But then I started swimming year-round when I was 8 and ever since then it’s been more practicing and more work…It takes a lot of work. You just have to know how to plan around it because with year-round swimming, it’s a full-on lifestyle.”
Despite all the hard work and dedication, Perdue still has a bubbly personality.
“She seems to do all of it well,” Thomerson said. “I’m pretty sure her grades are pretty good. They just all get along really well, so they’re kind-hearted kids. It’s just a good bunch of kids.”
Even if Perdue doesn’t break the school record this season in the 100 back, she has plenty of time.
“I’d love to break at least one school record on my own,” she said.