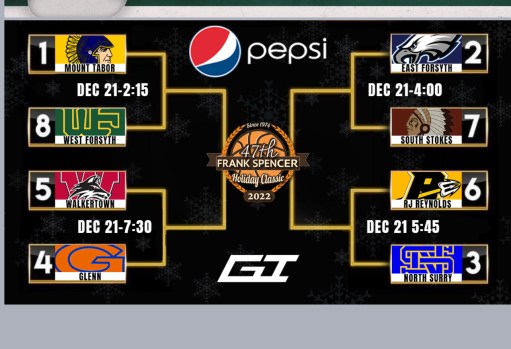 Logo courtesy of Game of Inches/WSFCS 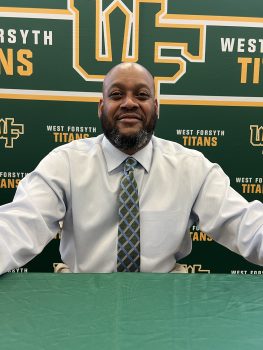 Titans will take on top-seeded Mount Tabor in first round on Dec. 21 at Reynolds at 2:15

It’s almost Christmas and that means it’s time of for the annual tradition that is the Frank Spencer Holiday Classic.
Brackets for both the eight-team Pepsi Bracket and the Atrium Health Wake Forest Baptist Bracket were announced Friday at the Winston-Salem/Forsyth County Schools Education Building.
In the Pepsi Bracket, which will be played at Bryson Gym at Reynolds for the first round and semifinals, No. 8 West Forsyth will play at 2:15 on Wednesday against No. 1 Mount Tabor.
As of Friday afternoon, West Forsyth is 3-2 overall and 1-1 in the Central Piedmont 4-A. West Forsyth played at No. 4-seeded Glenn later Friday night in a conference game. West has won five Frank Spencer championships, the last one coming in 2016.
“We are in the main bracket, but I think that’s where we want to be,” Coach Marlon Brim of West Forsyth said. “But I also think, with them being young and being where we are, I think either bracket would’ve fit us well.
“I figured we’d be anywhere between (seeds) 5 and 8,” Brim said.
With 16 teams and seven of the eight Central Piedmont 4-A teams playing in either bracket, it’s hard to avoid playing conference teams. That’s the case with West Forsyth facing Mount Tabor.
“I think we’ve got to be consistent,” Brim said. “Once we (get) consistent and we get healthy I think we’ll be a better team in this Frank Spencer.”
West Forsyth and Mount Tabor played their first conference games of the season last Friday at Mount Tabor, with Mount Tabor winning 81-61.
“For the Holiday Classic it’s just about winning the Frank Spencer,” Brim said. “And we knew we were going to have to play them in that bracket. So, we’ve got to play them first, semifinal, or championship. So, we have to play them either way.”
As of Friday afternoon, Mount Tabor is 6-1 overall and 2-0 in the Central Piedmont 4-A.
“It’s about the next game. It’s about the next tournament,” Coach Andy Muse of Mount Tabor said. “You’ve got to look through your windshield. You can’t look in the rear-view mirror.”
Mount Tabor has won the Frank Spencer Holiday Classic six times, the last time being 2019.
“You don’t want to play a conference team in the first round, but it is what it is,” Muse said. “And we’re going to show up and they’re going to show up. And you know that the No. 1 seed in the Frank Spencer has been upset many times.
“So, we’ve got to bring our “A” game, and we know everybody that plays Mount Tabor will bring their “A”game. So, we get everybody’s best no matter what night it is, what tournament it is. So, it should be a very competitive game.”
Mount Tabor lost to Ragsdale 81-76 in overtime the day after the West Forsyth win. However, Mount Tabor beat CPC rival Reynolds 72-20 this past Tuesday.
“We’re playing very well right now,” Muse said. “And we’re playing defense, and I think we hustle as good as any team that Mount Tabor has had.”
As for West Forsyth, it is looking forward to the challenge of Mount Tabor and also playing three games in the tournament, win or lose.
“I think you prepare kids after their last conference game for the Frank Spencer,” Brim said. “And I’m thankful that we’ve got those two days to prepare for the Spencer. In the past it used to be one day to prepare, but now you have two days to prepare.”