Adams always up for a new challenge 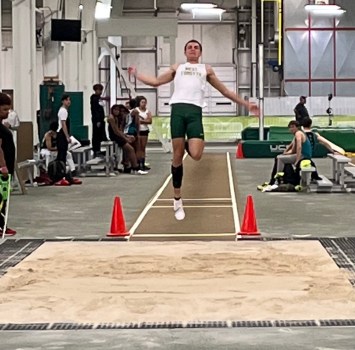 Tyson Adams is one of those athletes who, no matter what he tries, excels no matter how much he practices.
Adams, a senior at West Forsyth, grew up involved in baseball, basketball, swimming and flag football. He never competed in any events in track and field until last indoor track season. He decided to take up the long jump and ended up winning the indoor championship this past February at JDL Fast Track. Later this past spring, he won the long jump at the outdoor track-and-field championship in in May at N.C. A&T.
Just over a year since he decided to take up track and field, he has decided to take up the 55-meter hurdles. Having never run the event before, he competed in a meet two weeks ago at JDL and won the event.
“That was the first time I had ever run it in a meet, and I practiced one time,” Adams said. “Well, I practiced the hurdles, but I hadn’t practiced like actually running them except for one time before the meet began.
He won the 55 hurdles that day at 8.07.
“I wasn’t super-shocked,” Adams said. “I was hoping I was going to go a lower time, but I hit four out of five hurdles, so I think I like kind of messed myself up there.”
Once Adams gets the technique down and doesn’t hit as many hurdles, the sky could be the limit.
“I think I could have a lot faster time, but I still have to work on my form going over the hurdles,” he said. “It’s not the greatest. I can have good form going over some of them, but then other times, I might not. I think the first time I did them my form was actually really good. I just didn’t clear the hurdles very well.”
That’s music to the ears of Adams’ track-and-field coach at West Forsyth, Nathan Newsome.
“The more he runs it the better he’ll get,” Newsome said. “He’s pretty raw as far as that stuff goes. But I would anticipate he’ll get better. But we’ll just have to see.”
This is all came about because Chuck Lott, the hurdles coach at West Forsyth, thought that Adams would be well-suited to try running the 55 hurdles at indoor meets this season.
“Coach Lott had encouraged him to give it a shot,” Newsome said. “We knew he was really fast. I think Tyson had in his intrinsic interest in trying the event. He’s a little on the taller side, and he’s a good natural athlete. So, it’s a short enough event where it doesn’t take a whole lot out of you.
“He gave it a shot. The first time he ran it, he qualified for the state meet, which was pretty unique. I honestly wasn’t really surprised just because Tyson is such a good athlete anyway.”
It took a little prodding before Adams took up the specialty of the 55 hurdles.
“I was going to do them last year, but Coach Lott said I wasn’t flexible enough to do them last year,” Adams said.
Despite Adams’ analysis of himself, he results don’t point that out.
“I’m not as flexible as I should be, but I think I got a little bit more flexible over the summer, and as I was warming up with the hurdle group, I was gaining more flexibility because their warm-up is based off what somebody would do if they were doing the hurdles.”
During the indoor season, Adams is competing in the 55 hurdles, the 55-meters, the long jump and the triple jump. The maximum number of events to compete in in an NCHSAA meet is four.
Adams best long jump is 24 feet, 4 inches. He won the NCHSAA Class 4-A indoor meet in February at 23-1. He won the outdoor championship in May at 22-11 1/2.
Adams competed this past Friday in the 55 hurdles at a Forsyth County meet at JDL, and didn’t fare as well, finishing 12th out of 42 people.
“With him being, in my opinion, a heavy, heavy, heavy favorite for the state champion of the long jump — the hurdles involves a lot of jumping. And it can make your shins get shin splints,” Newsome said. “And that can become kind of a pain, literally. I just want to make sure to keep a really close eye to make sure that he doesn’t start to overwork.
“And Tyson really hasn’t done a whole lot in the way of triple jump. But I think he’s a potential state champion in the triple jump, as well.”
All of that puts a lot of stress on your body.
“When you long jump and triple jump and hurdle that’s a lot of jumping,” Newsome said. “So, we’ll just have to be conservative with when we do it. If there’s anybody can do it I think he can.”
Adams won the 55 at the Forsyth County Championships and had a personal record (PR) by .02 seconds and also won the long jump at 23-2 and the triple jump at 43-10 1/2.
“If I pick up the technique. I feel like I can do really well in the 55 hurdles, especially since I just started them,” Adams said. “I qualified for states already in the first meet that I started in, so I think that I can do pretty well with that.”