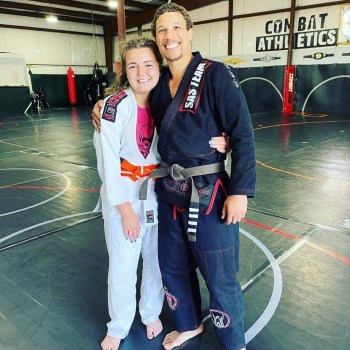 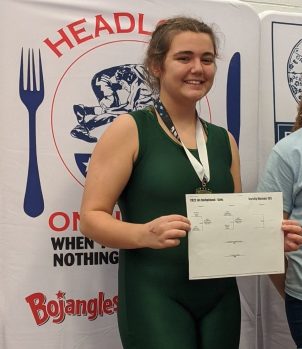 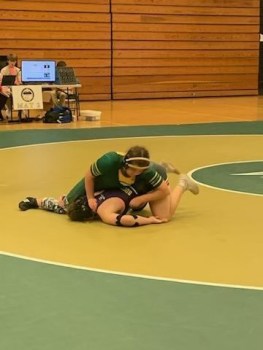 Freshman Jadyn Magallanes of West Forsyth is thrilled about being part of history.
Magallanes is competing in the 165-pound weight class on the girls wrestling team, which is in its first season as a full, sanctioned team.
“I was shocked at first because I didn’t expect there to be an all-girls team,” she said. “There weren’t many people interested. Then I heard there was going to be an all-girls interest meeting, I couldn’t make it to that. So, I went out to the practice and there’s actually a lot more girls than I thought there would be. I was just surprised.”
Magallanes is the daughter of Jason and Kim Magallanes, who live in Davie County. Her mother is a financial secretary at West Forsyth. Getting acclimated to West Forsyth hasn’t been much of a problem for Jadyn. She has straight A’s.
This past April, the NCHSAA unanimously approved girls wrestling as a sanctioned sport beginning during the 2023-24 school year.
This season will be used as a practice run to work out any issues and to help with the seeding process during championships.
“It’s amazing how many girls there are doing it because I really enjoy it, but I didn’t expect so many girls to come out and enjoy wrestling like that,” Magallanes said. “I didn’t expect it at all.”
Even though this season will be used as a trial run by the NCHSAA, the girls will have their own state championship. Before this season, girls who wrestled were in an all-girls invitational or had to wrestle against boys.
“It means a lot because at first I thought about it, it was just a wrestling team,” Magallanes said. “Then I joined it and the more I talked about it, people kept bringing it up, ‘Well, you’re the first girls wrestling team and it’s your first year of high school. You’re making history.’
“So, I kind of felt proud of the whole team because we all came and we all did this, but also, I had to take a step back because I had to think about it. I thought, that’s kind of impressive.”
Magallanes was already involved in a sport, just not a school sport. She has been competing in jiu jitsu for the past five years at Combat Athletics in Mocksville.
Magallanes said she has a winning record so far this season, saying she’s either 6-4 or 6-5 through the early-season matches.
“I thought it was possible (to have a winning record). I just didn’t know how easy it would be to get there because wrestling is a little slower, and with my jiu jitsu background, which is faster-paced, it kind of helped me,” she said. “And that’s kind of my pace. So, I had to completely change the mindset.”
Despite being totally different sports, there are similarities.
“From standing, it’s very similar,” Magallanes said. “A lot of the takedowns are really similar. You just have to be more careful in wrestling because you can hyperextend stuff. But when you get to the top and bottom, you do escapes the same way. In jiu jitsu you can be on your back and you can go from your back. Wrestling, that’s the one position you don’t want to be. So, you do have to change from there.”
Like most things, there are some differences.
“One main difference is when you’re on top and bottom, in jiu jitsu if you’re on top your immediate reaction would probably be a choke hold or pull them into your back,” Magallanes said. “The first reaction in wrestling is to break them down because there are no choke holds or arm bars. Your first reaction is to get them on their back, but in jiu jitsu you try to get them pulled into your lap to choke them or something.”
While competing in one of the two sports, it can sometimes play mind games with you.
“At first, I had to separate them because it was really confusing trying to focus on wrestling, but also incorporate jiu jitsu because I thought, ‘If I do this then it might be wrong or it may not be allowed.’ So, I had to keep them separate. But the more I did wrestling, I could tell what I could do and what I couldn’t do in jiu jitsu and kind of intertwine it. But it still gets a little complicated switching back and forth.”
One person helping her, as well as the rest of the girls wrestling team is Coach Jason Hooker, who also coaches the boys.
“I feel honored because every time I talk to someone who’s wrestled before, and I’d be like, ‘Oh, yeah, Coach Hooker’s my coach.’ They’re always, ‘He’s really good. He’s a really good coach.’” Magallanes said. And everybody knew who he was. If you’re in the wrestling community, you know who Coach Hooker is.”
There are also some detractors of girls wrestling, but Magallanes and others are proving that wrong.
“When people say that we shouldn’t (wrestle), I don’t know how to explain it, but I just kind of disregard it,” Magallanes said. “I just shrug it off and don’t really pay attention when they say stuff like that.”